The Toronto Blue Jays are thankfully still in the playoffs after their big win last night against Cleveland. And while we might be in for a massive let down one of these days, there's one group that's been riding high throughout the entire baseball post season.

The restaurants near the Rogers Centre are pretty happy with the Blue Jays right now because they generally get slammed both before and after home games - no one wants to pay stadium prices, right?

While you'd expect places like Real Sports and Jack Astors to fill up, nearby local eateries are packed too.

Canteen, on the ground floor of the TIFF Bell Lightbox, has been offering Blue Jays specials all season long, including $5 Mill Street pints and bratwurst. Manager Lauren tells me the restaurant's usually busy before and after games. Though if the Jays performed poorly, they wouldn't have as big of a post-game crowd.

But yesterday, about an hour before game 4, Canteen started filling up with fans. "We've been seeing a lot of Blue Jays jerseys, you know," says Lauren. "When I look around, half our guests right now are in Blue Jays gear."

Relative newbie Calii Love is located at King and Peter, making it a good spot for those looking for a healthy(ish) snack before heading to the Rogers Centre.

Co-owner Dan Gunam says he sees lots of people in Blue Jays jerseys coming through his space, especially when the team's playing at home. 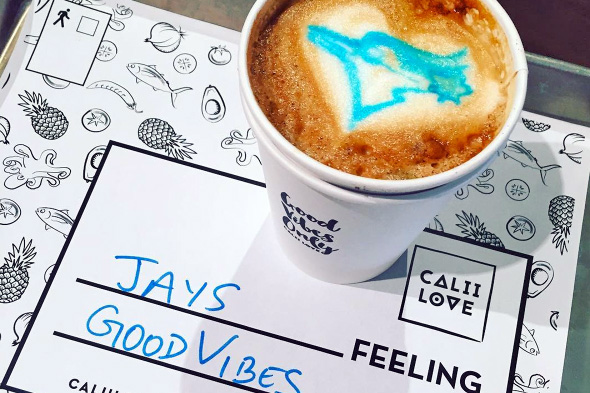 While much of the in-store traffic comes from those passing by, Guman also thinks his restaurant's Instagram and creative latte art help get customers in the door.

And nearby Burrito Boyz is also slammed, especially after later games. The late-night eatery also screens games, so employee Sasha tells me it's busy whenever the Jays are on television.

Photos of Burrito Boyz and via @caliiloveco.