La Carnita found itself in the midst of a firestorm of social media attention for all the wrong reasons today following a sexist caption on an Instagram post that was subsequently removed. An initial apology followed on Twitter a number of hours later, but it did little to dampen the flames.

In the meantime, those following the story had revealed a lineage of problematic social media posts and behaviour at the restaurant, including tweets referencing women as tacHOES, a juvenile and dangerous washroom sign, and allegations of discriminatory hiring practices. Given the history on display, the initial apology wasn't deemed adequate by many people. 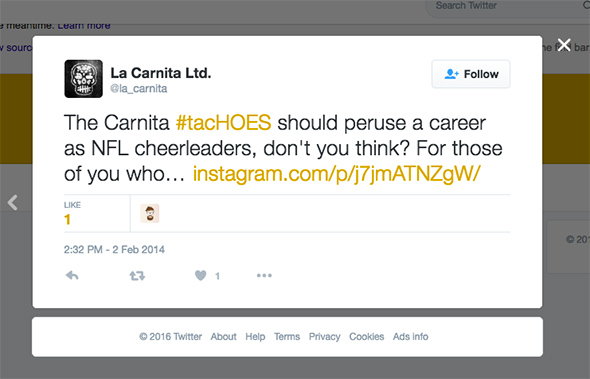 At around noon today, owner Andrew Richmond finally took to Facebook in an effort to explain what the restaurant will do to prevent prejudicial posts and behaviour like this from happening in the future.

The post was more thoroughgoing than what had appeared on Twitter earlier, but after the day's events and all the information that had come to light, questions persist on social media as to whether it's enough. 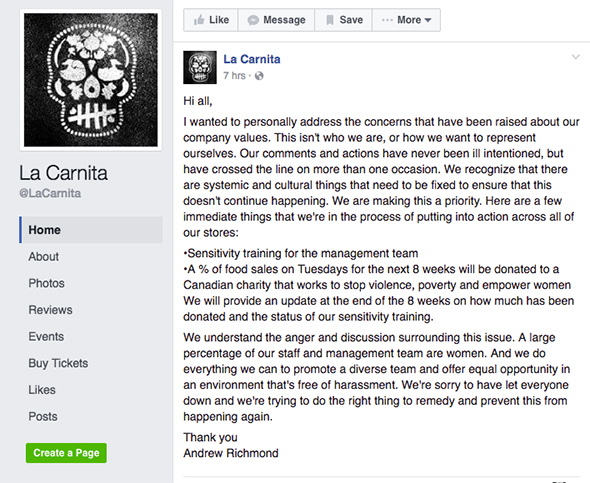 For his part, Andrew Richmond said that "it kills him" that the initial post was made under the La Carnita name. The restaurant, which is from the same owners as the popular Sweet Jesus ice cream shop as well as Good Fortune Bar, has given itself eight weeks to have all staff take sensitivity training, and will donate proceeds from its Tuesday sales to a yet to be determined charity that "works to stop violence, poverty and empower women."

For some, the donation doesn't go far enough because the amount hasn't been disclosed and the funds come from the pockets of customers.

There are 70 comments on the Facebook post at present, many of which question ownership's resolve to address systemic misogyny or ask for specifics regarding the sensitivity training. La Carnita is under the microscope, to put it mildly.

How the restaurant responds in the coming days and weeks will ultimately demonstrate how seriously the situation has been taken. Here's a sampling of the responses on Twitter this afternoon.