Toronto's Bunz Helping Zone stays true to its name. It lets Torontonians solicit advice on a slew of issues, both mundane and serious - the latter of which usually attracts lots of attention from fellow members. That was the case this weekend when one woman posted about her experience at a local bar.

On Friday evening, one community member recounted a recent night out at Dundas and Ossington bar The Painted Lady. In her post, she claims she witnessed two men slipping pills into drinks intended for her and her friend. She felt the bar handled the serious situation inadequately and sought out guidance online.

In the wake of her post negative reviews started popping up on The Painted Lady's Facebook page. The establishment began responding with this statement: 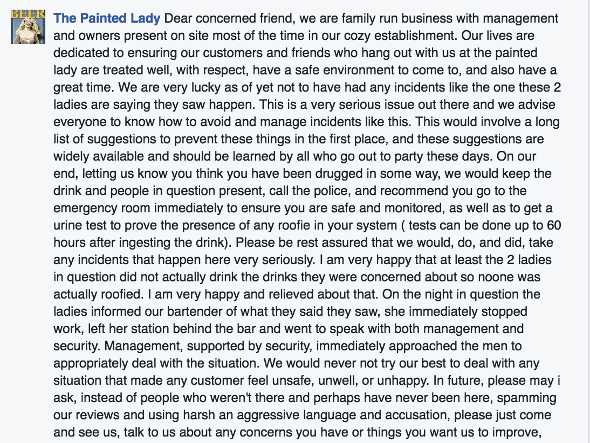 After this surfaced, the negative reviews continued to roll in with individuals accusing the bar of victim-blaming and perpetuating rape culture.

Later, The Painted Lady took to Twitter to release another statement. 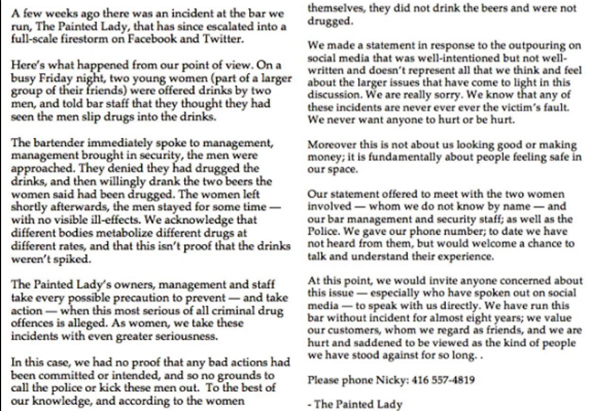 When reached for comment yesterday, owner Nicky Potter acknowledged her original response was rushed and insufficient. She says she and her team want to make sure The Painted Lady is a safe space for all people at all times.

"We will be meeting with local police force on Monday morning to discuss the situation and learn about police protocols for these situations," she says in a statement.

"We will also be calling an all-staff meeting to ensure that our bartenders, security and any other staff have current training on how to deal with any situations around sexual assault or attempted sexual assault."

As this social media maelstrom starts to blow over, it points to a bigger issue that's been plaguing Toronto's bars and nightclubs for years. And it's one that must be dealt with on an industry-wide scale so that all party-goers can have fun without fear.

10 farms for strawberry picking near Toronto

Candy company is closing Toronto factory after more than 100 years