Much hyped Recess Diner flames out after two months

The tables are set but the lights are out at Brad Moore's restaurants Recess Diner and Fountain. A notice of termination on the doors says the tenant owes more than $260,000 in rent. This comes just two months after the adjoining eateries opened at the base of the Art Condos on Sudbury Street.

The restaurants, which were first announced in early 2014, took almost two years to launch, and had barely opened when ex-employees reached out to us about the property being seized. 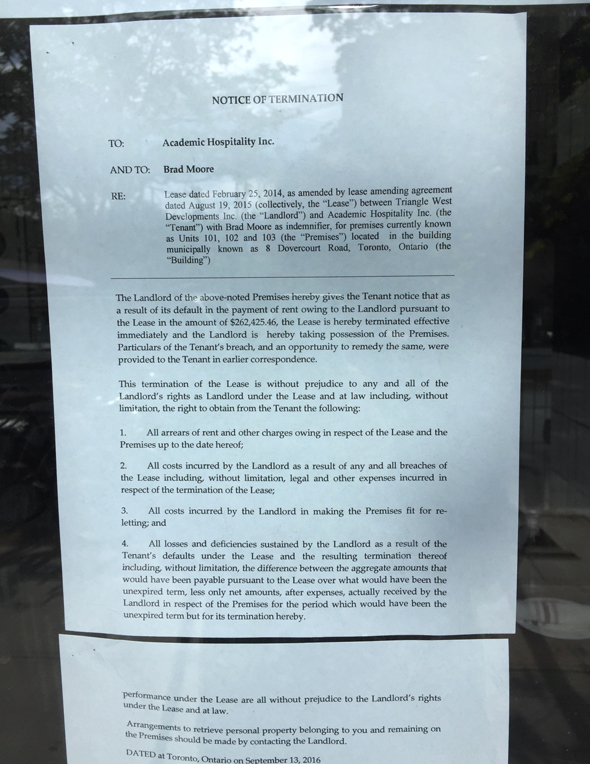 Two tipsters (names withheld) claimed similar sentiments: the restaurant "[owes] a lot of staff and vendors a lot of money..."

"I left because I had serious doubts about his ability to run a business. This is before my paychecks started coming back NSF. At first, they didn't withhold wages... their cheques simply failed to clear. Later when I requested a replacement cheque or a more secure form of payment they stalled, ignored and then threatened," alleges one ex-staffer who worked for Moore prior to opening.

Calls to the restaurant have gone unanswered. Old School, which Moore previously launched, has distanced itself from the restauranteur and tells me "he no longer has any involvement with the business."

In response to our post, Recess reached out with their version of events and promised that the closure is only temporary. Here's a statement from chef/owner Brad Moore:

"Due to unforeseen circumstances involving our former backers, we experienced a series of operational and financial setbacks. We're excited to be moving forward now with a new set of backers and plan to be operational within the next few weeks, but first and foremost on our agenda will be rectifying any payment discrepancies for our former employees. We appreciate the support and patience of our landlord, and look forward to sharing our food concepts with everyone very soon!"