The history of ice cream trucks in Toronto

For many, the call of the ice cream truck is a rite of summer. What better way to beat the heat than with a cool treat?

In fact, these desserts have been enjoyed for hundreds of years. Like many of life's pleasures, however, they were originally reserved for only the wealthiest individuals.

There are many stories that explain the origins of ice cream and other frozen treats. In Rome, it's believed that Emperor Nero ordered slaves to hike the mountains to collect ice and snow to keep his fruit drinks cool.

Elsewhere, monarchs used flavoured ices in their banquets to impress their guests. Charles I of England may have tasted one of the first ice cream dishes at a banquet prepared by his French chef.

According to the legend, Charles I enjoyed the frozen cream so much that he ordered the recipe be kept a secret. 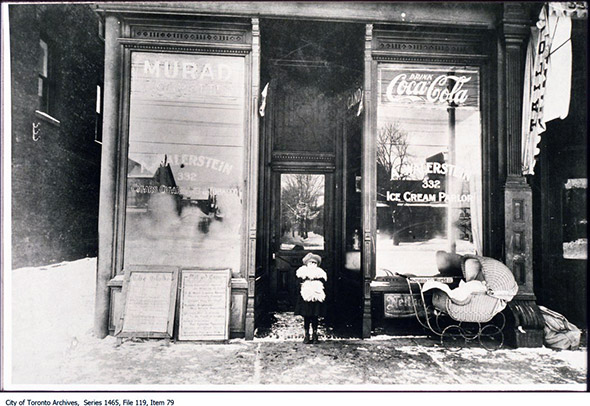 Photo of an ice cream parlour in Toronto. Date and location unknown.

It would take centuries before controlled cooling techniques were discovered (dissolving saltpeter in water). Once mastered, ice cream and frozen treats were no longer an exclusive luxury.

The story of the ice cream vendor in Canada does not begin until the mid 1800s - and it begins in Toronto.

Torontonian Thomas Webb was the first Canadian to sell ice cream in 1850. Shortly afterwards, the first commercial batch of ice cream was produced by William Neilson on Gladstone Avenue in 1893. 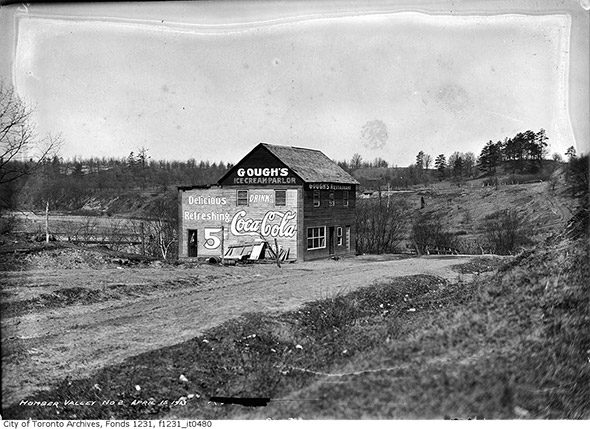 By the 1900s ice cream was everywhere! Parlours opened up across the city and the chilly treat became a new favourite for many Torontonians - especially during the city's notorious summer heat waves.

The ice cream truck that we recognize today did not appear in the city until the late 1950s.

In the meantime, mobile ice cream vendors - often immigrants - used push carts or wagons. In a classic Pavlovian response, children were drawn to the vendors by the sound of a ringing bell. 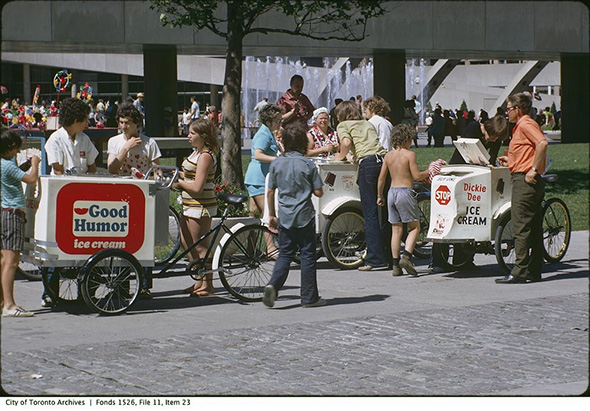 Whether in push carts or wagons, ice cream was cooled using large blocks of ice. Originally served in reusable dishes, it wasn't until 1904 at the World Fair in St. Louis that ice cream was paired with its greatest love: the ice cream cone.

In Toronto during the early 1900s, the cost of an ice cream cone was only 5 cents.

The iconic white Grumman trucks that we see today were a product of the advances in refrigeration technology.

Originally, trucks were owned independently, each equipped with its own recipe and process for ice cream making. By the early 1960s, these trucks could be found roaming all over the streets of Toronto. 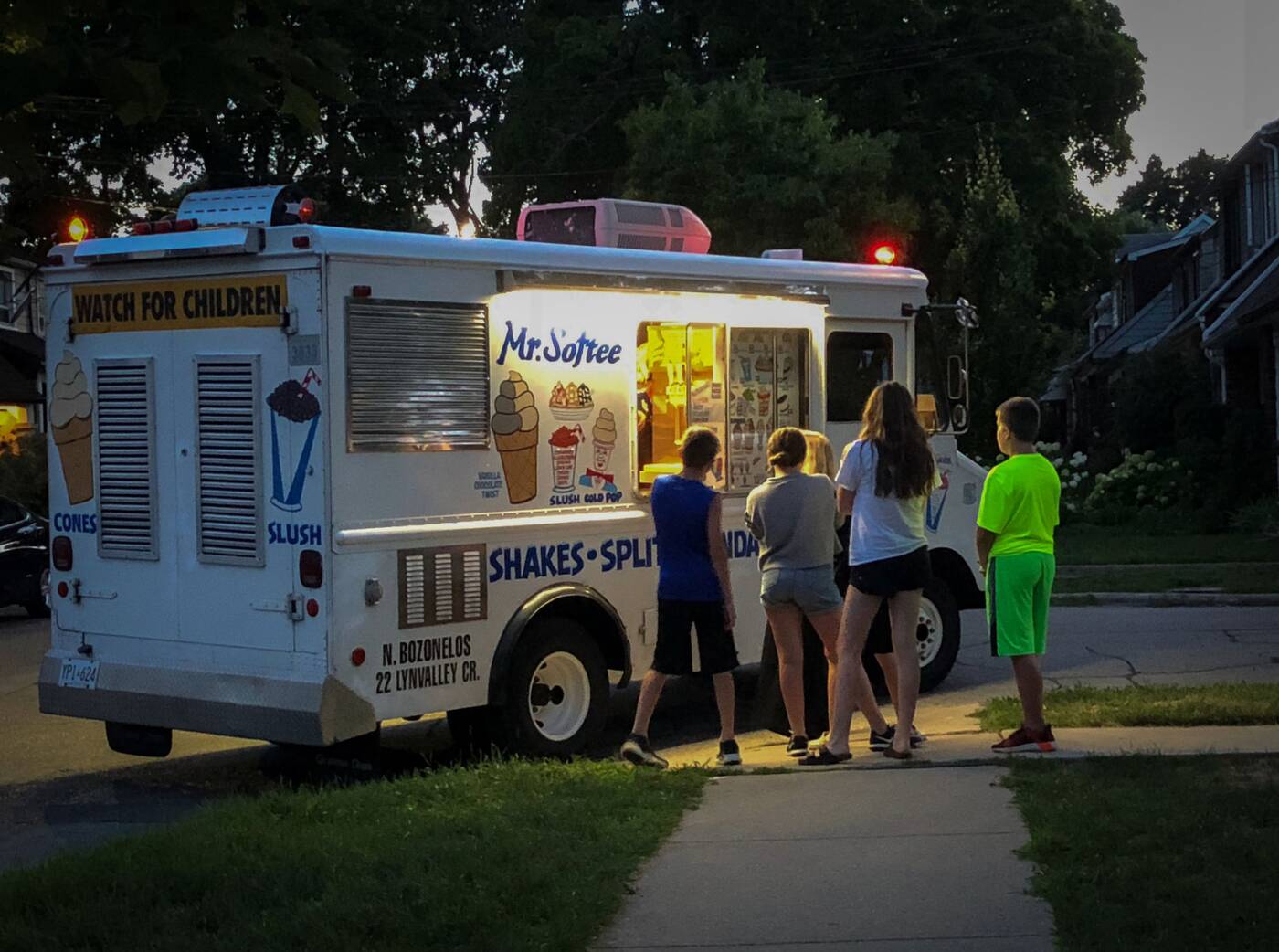 However, there is an unsavoury side to this sweet tale. Due to an increase in auto accidents involving small children and ice cream trucks in the 1960s, some neighbouring municipalities enforced a ban on the mobile vendors.

In the 1980s, Toronto had multiple occurrences of ice cream trucks being used as fronts for selling drugs.

And what about the origin of the ice cream truck's familiar jingle, summoning children like a modern Pied Piper?

The song is a version of "Turkey in the Straw," though some historians argue that the actual tune has disturbingly racist links thanks to American adaptations of the original.

Today, ice cream trucks are less likely to be independently owned, though this set-up isn't quite extinct. Companies buy multiple trucks to create entire fleets and turf wars are common. 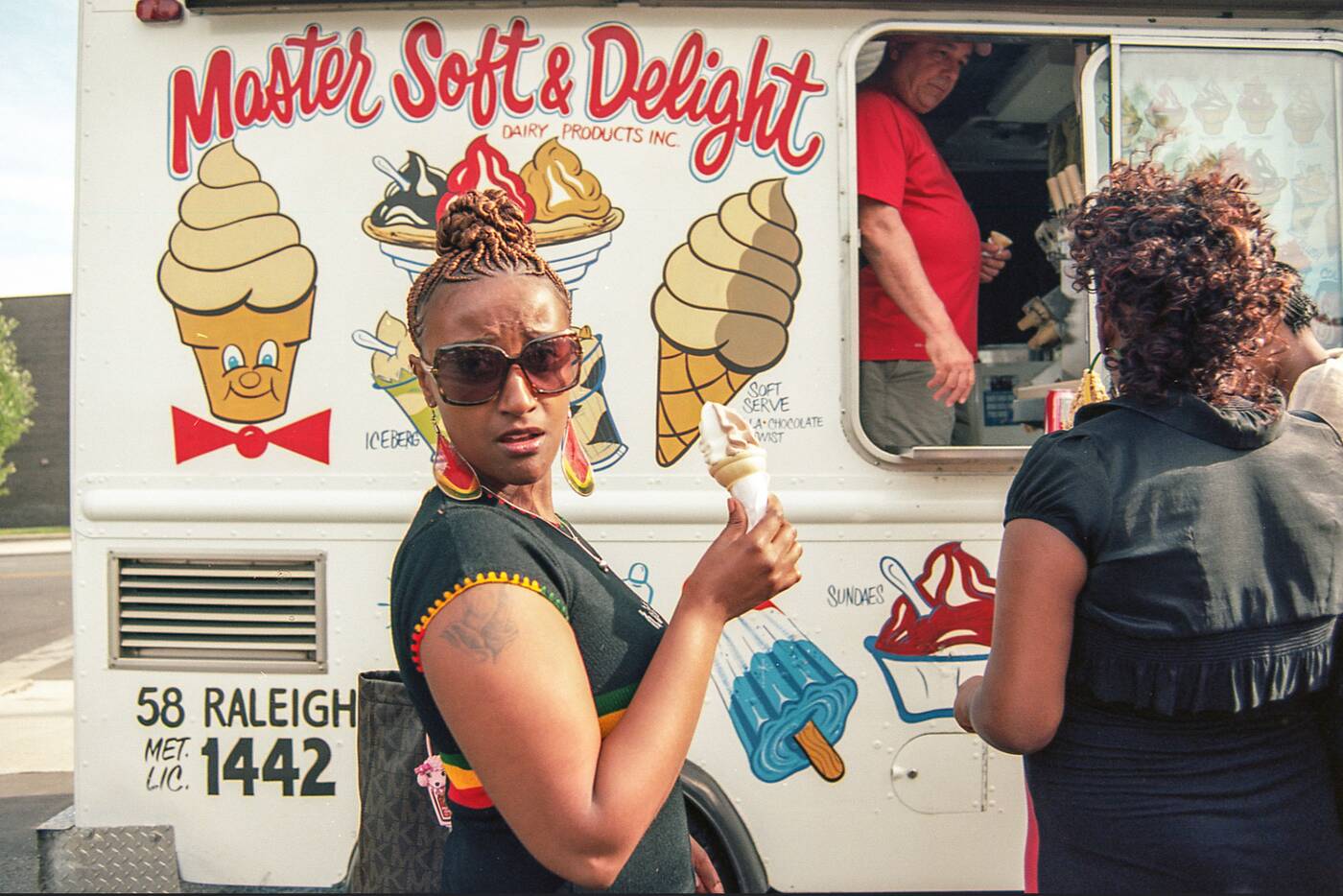 Cooling down at an ice cream truck in 2015. Photo by yedman.

Stiff competition, the expense of equipment, permits and strict regulations mean ice cream truck sightings are less common than they once were.

The story of Toronto's ice cream trucks is far from over, though. As Canadians, we're ranked 7th of the top ten ice cream consuming countries. 40% of Canadians enjoy ice cream at least once a week.

Wondering what to order? Try the vanilla ice cream. It is the most popular flavour.