Why some Toronto restaurants no longer accept cash

If you're ever in the mood for a Sam James cappuccino or a matcha-flavoured treat from Tsujiri, you usually have to scrounge around for change because both of these popular spots are cash-only.

Some local eateries, however, are taking the opposite stance. Instead of shunning plastic, mini-chain IQ Food Co. is embracing it by going cash-free at its two newest locations, in First Canadian Place and Equinox Yorkville, respectively.

Founder and CEO Alan Bekerman tells me this move not only frees up valuable counter space, but it's also more efficient for both his customers and employees.

"If our managers have a finite number of hours in their day to do their job, I'd rather them dedicate an hour to empowering their team and minding the store than sitting in a back room counting cash and going to the bank," says Bekerman.

Bekerman was inspired to go this route after flying Air Canada. While he was soaring 35,000 feet above the ground, he made a small on-board purchase and wanted to pay cash. But he wasn't allowed to. "At first I was irked by it. I'm like, 'what do you mean I can't pay with cash?' And then I was like, I totally get it," he recalls, noting how cashless transactions are more seamless.

So far, his customers have responded well to his company's policy. However, he notes, this isn't a cost-saving measure. "From an economic perspective, it's not a trade-up. We, as a company, incur higher processing fees by taking more credit than cash," he says. 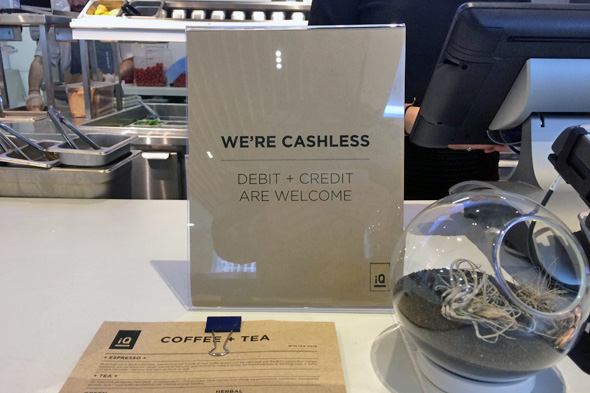 But IQ isn't the only one banning cash. Sorry Coffee Co., which is under the Kit and Ace umbrella, also unapologetically takes only cash-less forms of payment. One barista tells me it's a time saver for both customers and employees. It's also more hygienic.

In fact, Kit and Ace doesn't take paper money or coins at any of its retail locations. "We say we're omni-channel because we want to provide that same service on all the platforms," says Toronto store director Darryl Haas, noting how customers can get the same level of service regardless of where they are in the world.

"We are a very future-focused company," she continues, "and so we feel eventually everyone's going to be cash-less."

That's a sentiment Bekerman agrees with. "It [cash] doesn't really make much sense when you think about how easily accessible your money is by way of plastic."

What do you think? Is cash-free the better way to pay at restaurants?