Smoke's to open first burritorie next to Burrito Boyz

Smoke's is getting ready to open its first Burritorie at Duncan and Adelaide directly below its original poutine shop -- in the very same spot Burrito Boyz recently vacated for larger digs down the street.

Smoke's already dominates the late-night poutine market across Toronto. With outposts in the United States, and plans to expand into Europe, Australia and the Middle East -- along with the new-fangled Smoke's Weinerie -- it's not surprising that this Canadian chain is starting to offer food beyond the holy trinity of fries, cheese curds and gravy. 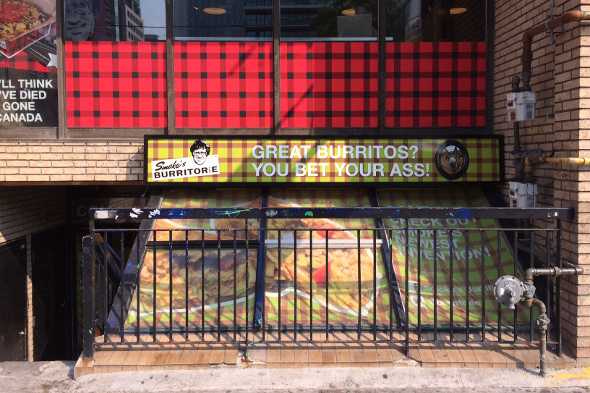 The new Smoke's Burritorie will be located on a stretch of Adelaide already filled with popular lunch hour and late night spots such as Burgers Priest and Burrito Boyz.

Burrito Boyz helped jumpstart Toronto's burrito craze back in 2004 and it now has 22 locations throughout Southern Ontario. Once Smoke's Burritorie opens up nearly next-door, it'll be intriguing to watch how both burrito-centric restaurants fare.

Where does your burrito allegiance lie? Let us know in the comments.