While Drake and Susur have managed to keep details of the restaurant mostly under wraps, they have both teased about their collaboration on Instagram. A week ago Susur took to Instagram to announce his new project. Two days ago he posted a photo with graphics from Drake's Hotline Bling in the background.

Drake, for his part, shared his excitement for the opening, congratulating the chef along with sons Kai and Levi as well as best friend Angelo Ferraro. 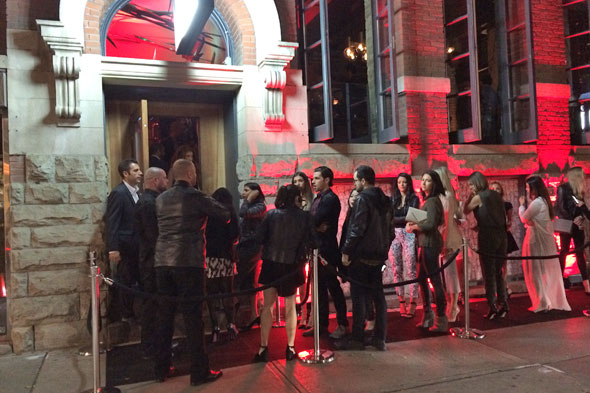 Beyond the teasers, the duo have been notably secretive about the launch and have managed to keep the details of the restaurant - including info about tonight's opening party - closely guarded.

Most celebs show up fashionably late to an event. #Drake arrives early to assume his DJ role & greet party goers at #FringsToronto.

What we do know has largely leaked out on social media tonight - Drake apparently showed up early to DJ and there's been a steady crowd outside trying to talk their way in. We have Ally Dean from Hello! Canada to thank for the news that Will Smith's offspring, Jayden Smith, has been grooving "like a boss" on the dancefloor.

Well, #JaydenSmith just bumped into me at #FringsToronto. And now he's dancing like a boss. It's all in a day's work.

Serena Williams may or may not also be making an appearance.

Rumours swirl the #Drake has requested a mic (!) and #SerenaWilliams is en route to #FringsToronto. Camera phone at the ready, friends.

We'll post more details about the collaboration, menu and other details as we get them.