The top 10 fusion poutine in Toronto

My recent survey of fusion poutine in Toronto has turned up some unique specimens that meld the Canadian experience with pretty much every other culture on the globe. As if poutine wasn't already a caloric atrocity on its own, here are all 10 of Toronto's most gluttonous poutine, ranked for taste and all-around shock value.

Jerk chicken shawarma poutine ($6.95), Chris Jerk
This was great - the only thing that could have made it better is if Chris Jerk subbed out the shredded cheese for proper curds. On the merits of the rich jerk-spiced gravy and the awesomeness of shaved jerk shawarma, this is one poutine I'm still raving about. 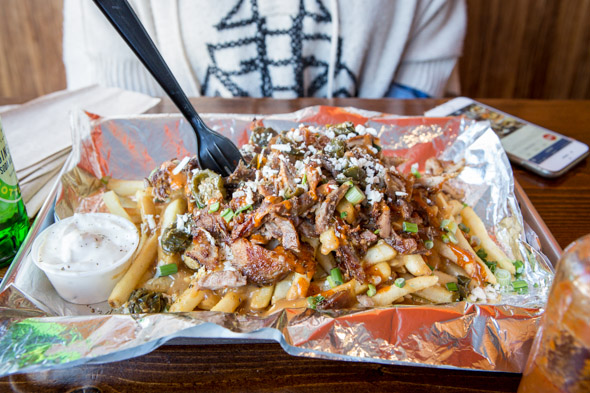 Gyro poutine ($12.50), The Original Gyro Grill
This monstrously sloppy mess featured a winning combination of gyro meat, fried spuds and gravy. If anything, this poutine could be dialled back a bit by ordering just one type of meat at a time. 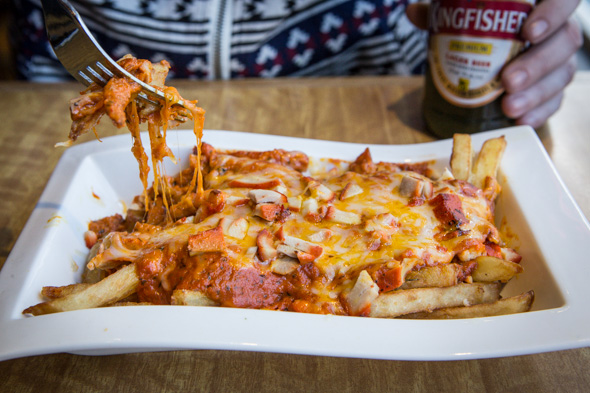 Butter chicken poutine ($9), Newab Fusion Grill and Indian Gastropub
Curry and fries isn't exactly groundbreaking, but it certainly is tasty. The rich, aromatic gravy does its job thoroughly melting the grated cheese over top of the fries so that it oozes and pulls into strings as the dish is eaten. Chopped bits of chicken are an excellent addition. 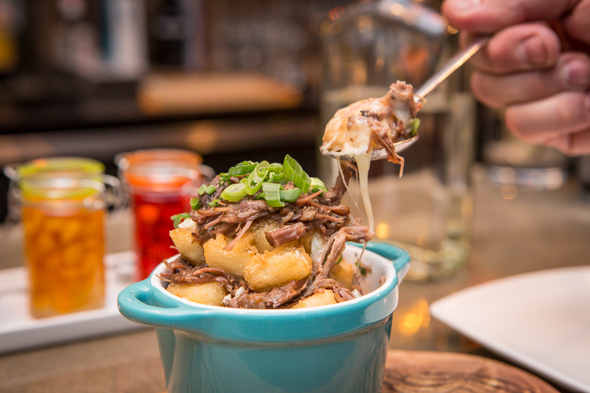 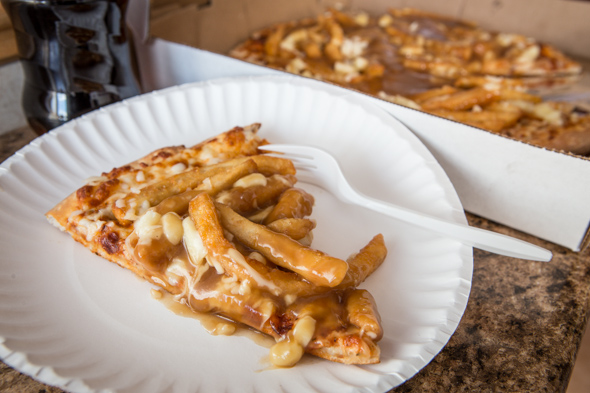 Poutine pizza (prices vary), Mr. Mike's
Mr. Mike's poutine pizza is exactly what it sounds like. And that is very good thing depending on how drunk you are. 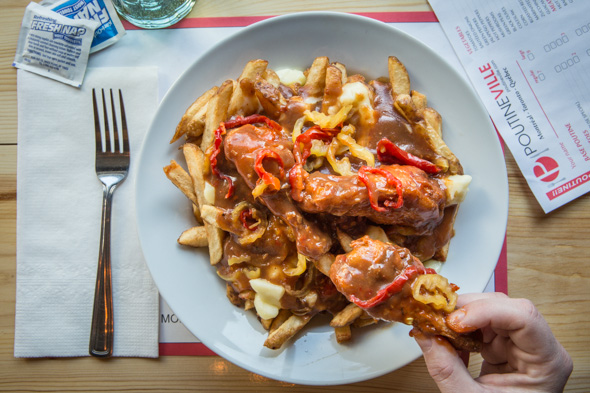 Chicken wing poutine ($13), Poutineville
Poutineville, being a Quebec import, naturally has this schtick down. The fries are on point, the curds are squeaky, and the gravy is ladled on so uniformly that it truly smothers the whole pile and melts into every nook. The spicy gravy is a nice little twist, but chicken wings on top detract from what is otherwise just really good, classic poutine. 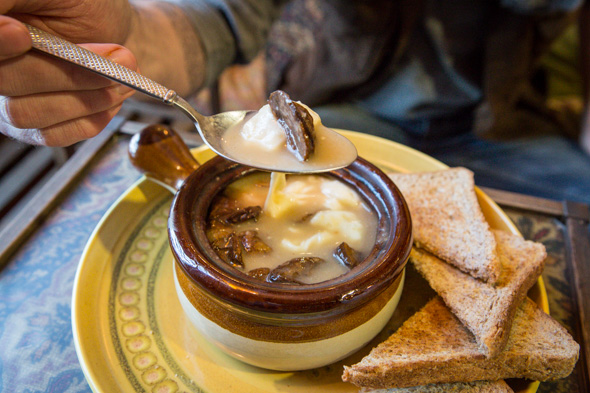 Poutine soup ($7.50), Bampot House of Tea & Board Games
In appearance, this dish least resembles poutine and yet, it's tasty and somehow manages to capture the iconic flavours. Potatoes covered in cheese and swimming in 'gravy' can't be a bad thing - even if you have to eat it with a spoon. 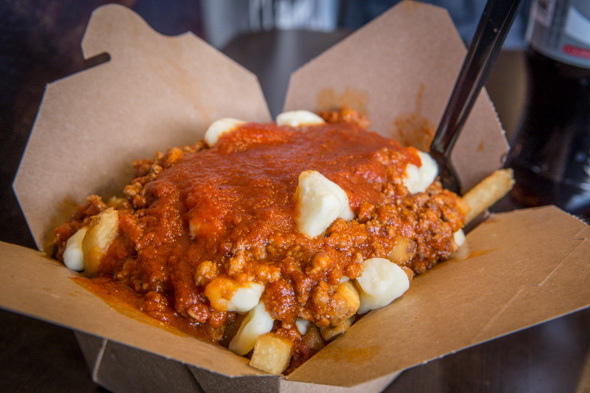 Italiano poutine ($6.75), San Francesco Foods
Substitute meaty tomato sauce instead of gravy, ladle it over a classic base of fries and curds, and voila. 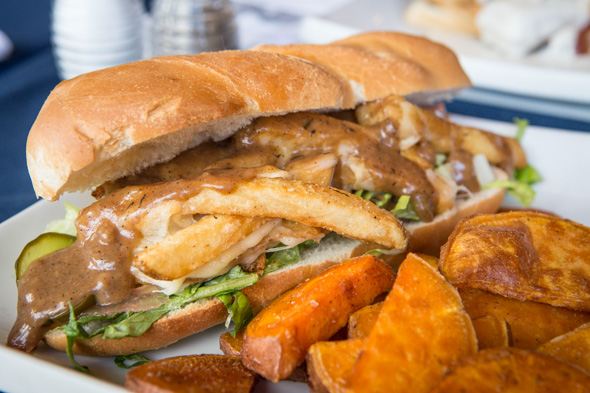 Acadian poutine po'boy ($9.95/6", or $11.95/8"), Billy Jack's
This was literally carbs on carbs with a side of carbs. The poutine itself is actually delicious, especially the Cajun spiced gravy, but it's perhaps better ordered au natural (as in, not on a bun) as an accompaniment to any of Billy Jack's many other delicious menu options. 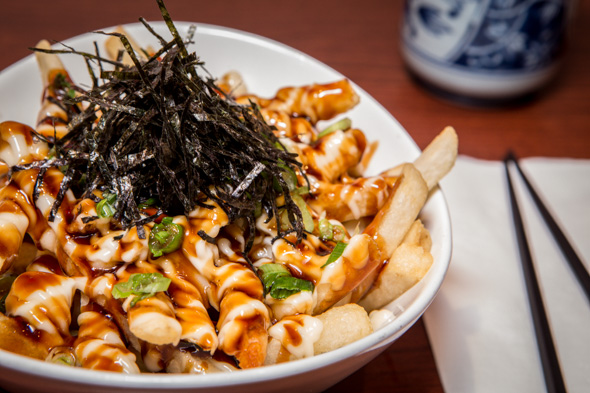 Japanese poutine ($3.95/small, or, $5.95/large), Ramen Raijin
The poutine served up by this Japanese pub veers from the tradition by dousing fries and cheese curds in a choice of tangy teriyaki mayo or a butter soy sauce. Unfortunately, this leaves the curds relying on the heat of the fries alone to melt ... which means, of course, they don't melt at all.

Know of any Toronto restaurants doing interesting takes on poutine? Let us know in the comments.