If you've ever felt sorry for yourself when your birthday falls on a weekday, then this guy, Mark Binks, might be your hero. The Toronto-based photographer celebrated his birthday this past Tuesday, and even though none of his oh-so responsible friends could skip work, he totally had a blast in a way that's worth sharing.

With the ambition of tackling our very own list of Toronto's best ice cream sandwiches, Mark updated us throughout the day on his progress via Instagram, eventually annihilating nine out of 12 spots on our list.

We checked in the next day to wish him happy birthday ourselves - and to see how it all went down.

Why did you do this?

I did it to raise awareness for an often tragically-overlooked, yet deliciously-versatile dessert treat, the ice cream sandwich. Also, my birthday fell on a Tuesday this year, and I knew most of my friends would be at work all day, so I needed something to do with myself.

Which was your favourite?

In all seriousness, it would be really difficult to pick a favourite. No one disappointed at all. There were definitely some surprises, though. The grilled cheese ice cream sandwich from Burger's Priest sounded a little suspect at first, but holy $#!& it was tasty. Perfect combination of savoury and sweet. I think I remember saying to the guy after I ate it, "I wish I never knew this existed now." They may be the death of me.

Do you agree with the list now that you've had a thorough sampling?

I definitely agree that they all deserve to be on the list. All were just great. As far as rankings go, I don't know if my palate is distinguished enough to place one over the other.

A real sleeper for me was the sandwich from Fika in Kensington. The lemon compote in vanilla bean ice cream on pistachio cookies was exactly what I needed mid-race. It was the perfect size for me at that point (it was the fifth place I'd been to in four hours), and the lemon acted like a palate cleanser after all the rich flavours I had eaten earlier. 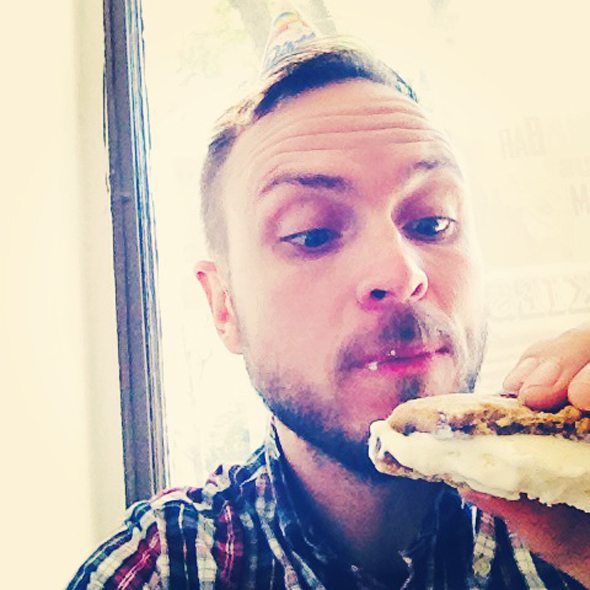 Did anyone give you free stuff 'cause was your birthday?

I didn't say anything about what I was doing until after I paid, but usually someone would see me sitting alone at a table, put on my birthday hat, and start taking a bunch of selfies. The girls at Moo Milk Bar were super sweet, and gave me a cookie with a sparkler in it!

Also, I actually got the grilled cheese ice cream sandwich from Burgers Priest for free as well. I had made the mistake of just ordering the regular sandwich (mistake is the wrong word - it was incredible as well), and when the guy behind the counter (the manager, I think) overheard me telling the girl at the register about my plan for the day, he insisted I had to try the grilled cheese ice cream sandwich (which is on the secret menu).

How did you feel after eating all nine sandwiches?

I'm blessed with a bit of an iron stomach so really, it wasn't as bad as I thought it would be. The next day, I wasn't feeling 100%, though, which I'm guessing was the epic sugar crash that comes after demolishing nothing but ice cream and cookies the day before.

If you could rank all your birthdays thus far, where does this fall on the scale of: regrettable bender to awesome bender?

Haha, I had a blast. It was the perfect combination of a lot of my favourite things: riding my bike around and exploring Toronto, taking photos, and of course eating ice cream! And the ice cream hangover was a lot less painful than the tequila hangover I would have typically.