How Canada Dry Ginger Ale was invented in Toronto

John James McLaughlin was 25 when he founded his soft drink empire. Born near Enniskillen, Ont., one of two business-minded sons of carriage maker Robert McLaughlin, "Jack" studied at the Ontario College of Pharmacy in Toronto and moved to Brooklyn to complete his qualifications.

While he studied, the moustachioed and kind-eyed McLaughlin worked the controls of a gleaming marble soda fountain in a New York City drug store, mixing fruit-flavoured syrups with carbonated water and ice for crowds of thirsty customers. Drinks with names like Humdinger, American Gentleman, Happy Hooligan, Gunther's Excelsior, Pugilists' Panacea, and the Japanese Thirst Killer were wildly popular.

The real money was in pop, not dispensaries, he thought. 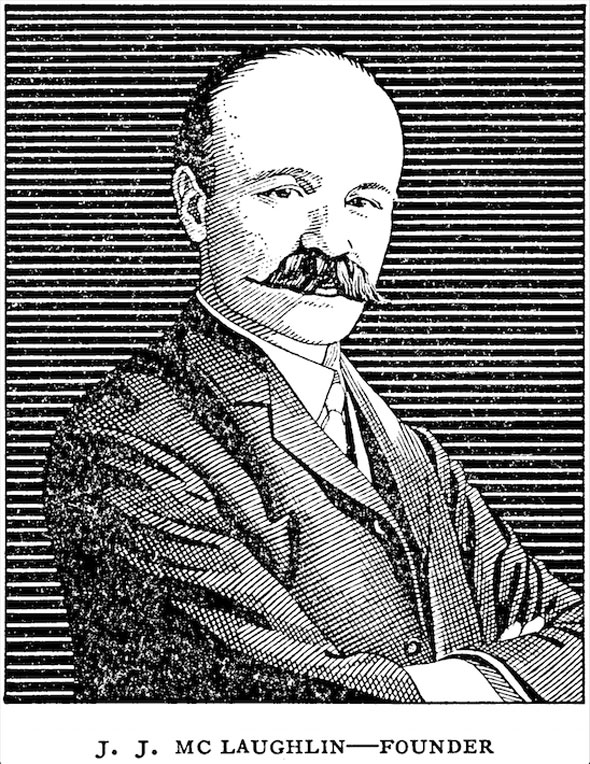 McLaughlin brought the soda concept home to Toronto and began distributing sparkling soda water and still mineral water from a store near Old City Hall in the early 1890s. His effervescent drinks came in seltzer bottles that could be endlessly re-filled and re-charged with carbon dioxide. A pull on the metal trigger released a burst of fizzing water that tasted like salted club soda.

The business did well, despite competition from at least twelve other rival soda companies, and moved to a larger premises on Berti Street near Queen and Church where it employed its first staff: "two men and a driver." It was here McLaughlin began mixing flavoured fruit syrups with sparkling water to make pop: "sarsaparilla, lemon sour, cream soda, ginger beer, cola," according to the Dictionary of Canadian Biography. 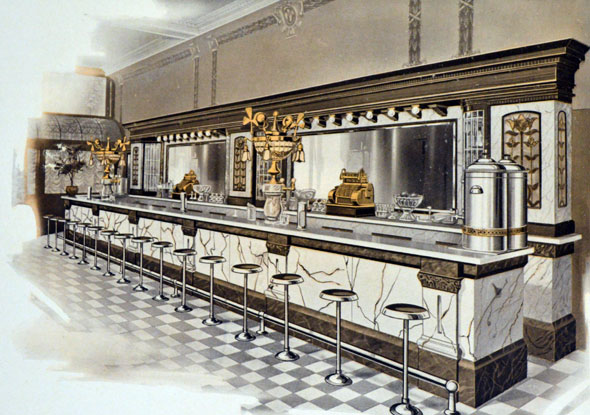 McLaughlin also marketed a bottle washing machine that automatically scrubbed, sterilized, and dried used soda bottles ready for re-filling. It sold well, according to newspaper reports, and was used in Manchester, England and other European locations.

Meanwhile, his brother, Samuel McLaughlin, was busily growing their father's business into what would eventually become General Motors of Canada.

The business expanded to another factory on Sherbourne Street, just south of Shuter, in 1893, combining the drinks and equipment manufacturing concerns under one roof. In 1895, McLaughlin employed 80 people and the company was known "from the Pacific to the Atlantic," according to a business supplement published by The Star.

Soon after the building opened, a boiler exploded in the basement after closing one evening, collapsing the brick facade into the street and wrecking the production line. The force was so powerful it smashed windows and scattered furniture in nearby homes, including the Moss Park mansion across the street.

The Globe and Mail reported that a packed streetcar and a passer-by narrowly avoided the cascade of bricks. All told, the blast caused about $10,000 worth of damage, none of which was covered by insurance. It's not entirely clear how McLaughlin was able to rebuild the factory but the accident didn't seem to present much of a setback. 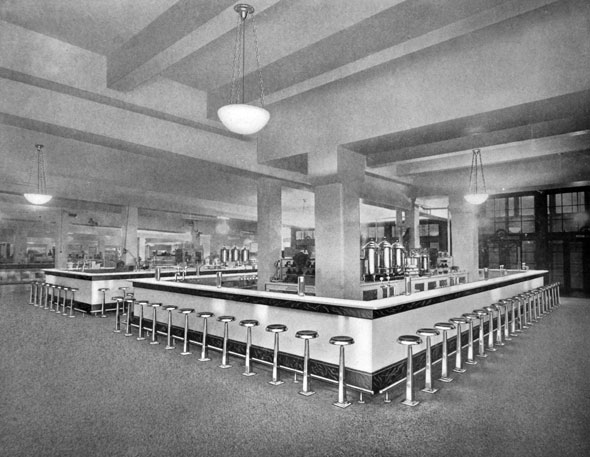 By 1905, a team of fruit handlers, surrounded by crates of oranges, lemons, cherries, berries, peaches, and plums stacked floor-to-ceiling, peeled, pitted, and performed "the multiple operations by which fruits are induced to part with their flavours" in the repaired building's basement.

On the main floor, the bottling department used McLaughlin's own machine to scald and scrub glass bottles ready for filling. A massive 1,600-gallon carbonated water machine - the largest of its kind in North America, built specially for the firm in London, England - mixed its sparkling liquid with the fruit syrups brought up from the floor below.

There was also space for offices, a soda fountain showroom, laboratory, machine shop, and stables for the horses that hauled the delivery wagons. The company's ice cream machines and marble soda fountains were installed at the Hudson's Bay Company in Edmonton, the Robert Simpson Company in Toronto, and the Orpheum Store in Montreal. 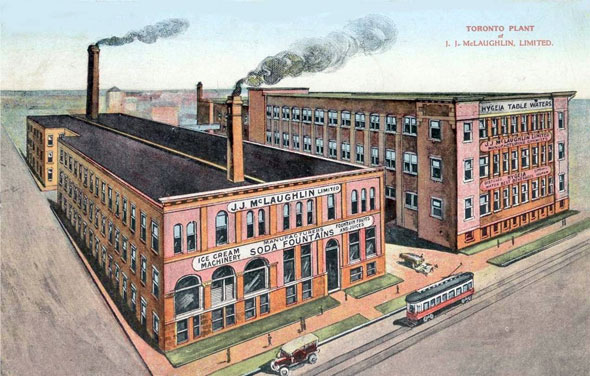 Some of J. J. McLaughlin's most popular drinks from around the turn of the century included Santoris pure sparkling water, Hygeia distilled table water from a spring in Arnprior, Ont., Hop-Tone "bitter-sweet tonic," and Tona-Cola, a coke drink that unashamedly borrowed from Coca-Cola. The Tona-Cola logo even used the same distinctive cursive script first used by the international drinks giant in 1885.

The drink was nicknamed "Ton O' Coal," a play on the way the name was pronounced, and like other sodas, it was sold through druggists, grocers, and fountains at 5-cents a glass. 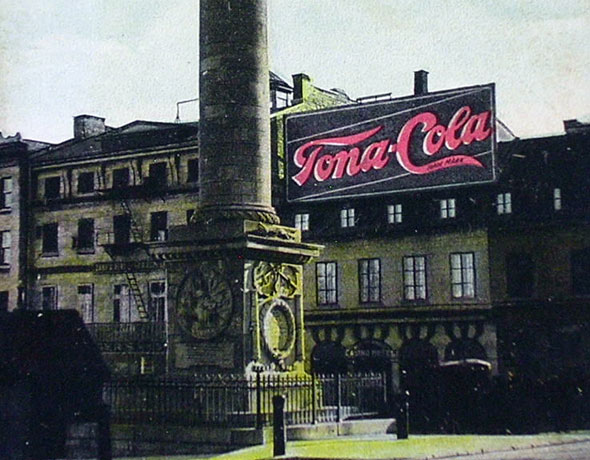 Many of the most popular soft drinks of the age were marketed as health tonics, claiming to cure everything from gland problems to nervousness and fatigue. Coca-Cola and Dr. Pepper, both of which emerged around the same time as McLaughlin's company, made similar health claims.

Ironically, despite his company's health promises, McLaughlin was frequently unwell. He spent time in Florida - he was in the US when the factory explosion occurred - in the hope the heat and bright sunshine would cure his malaise. 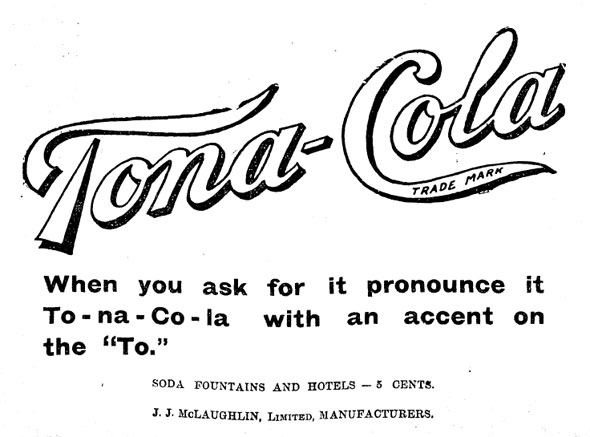 The company had long produced the dark and spicy "McLaughlin's Belfast Style Ginger Ale" - similar to an old-style ginger beer - but the product was refined in 1904 and renamed "Canada Dry" Pale Ginger Ale. "It has a snap and a tingle; a smart spry taste," early ads claimed. It was known as "the champagne of ginger ales" for its light taste and was marketed with a beaver icon and a map of Canada.

So popular was Canada Dry that McLaughlin opened plants in Edmonton and Winnipeg to help with national distribution. The trade name was registered to the company in 1907 and there were several offers to buy the rights to the drink, all of them rejected.

The sweet drink was even appointed to the Royal Household of the Governor General of Canada, at which point the beaver was removed from the logo in favour of a crown and the map of Canada was place inside a shield, as it is today. 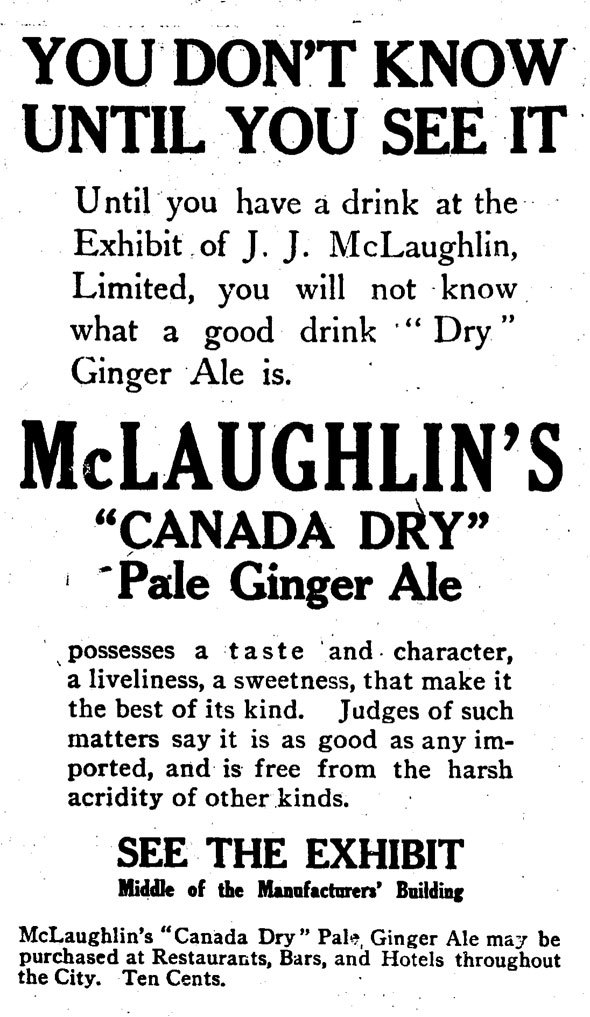 With Canada Dry continuing its explosive rise, McLaughlin died suddenly of a heart attack in 1914. The company stayed in the family, expanding to New York City in 1920, until it was sold in 1923 to P. D. Saylor and Associates, who renamed it Canada Dry Ginger Ale, Inc.

Today, Canada Dry is no longer associated with Toronto, or Canada. The brand is owned by the Dr Pepper Snapple Group, Inc. out of Plano, Texas, a faceless corporation that also produces 7 Up, A&W Root Beer, Clamato, Yoo-hoo, and countless others.

I wonder what Jack would have made of that. 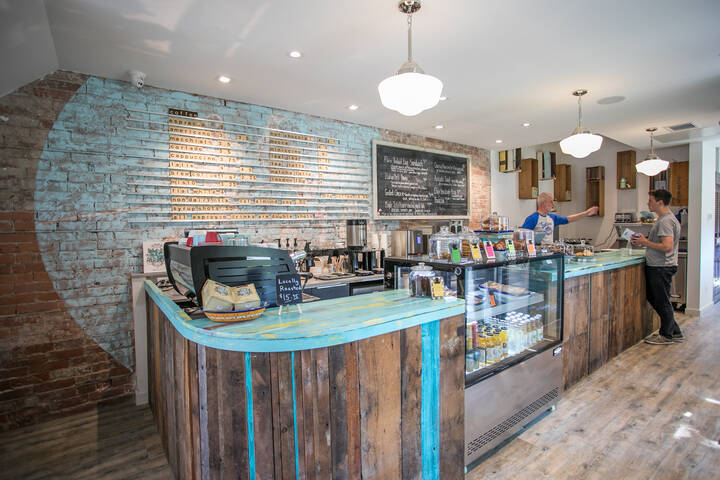 Toronto cafe permanently closes after only a year in business

Toronto brewpub has permanently closed but something exciting is coming

Toronto gelato joint is so popular it can't fully open yet