When people talk about the ingredients in beer, the conversation is usually about hop varieties, malted barley, or maybe even yeast strains. Water, though, is something we typically only bring up when discussing beers like Coors Light and Blue and even then we only do so to refer to the similarity of that beer to what comes out our sink taps.

But as Mill Street's talented brewmaster Joel Manning will tell you, the right water is actually extremely important to the production of great beer, and that's why for the latest addition to Mill Street's Seasonal Spring Mix six pack, he had to have just the right H20 trucked in on the 401.

Named after the route people traditionally use to carry their canoes around the Chaudiere Falls on the Ottawa River where Mill Street's Ottawa brewpub sits, Portage Ale was born at Mill Street's second location and, until now, was only available there.

This year though, they opted to bring the traditional cream ale to a larger audience and, for that, Mill Street required the soft water of the Ottawa River that's responsible for giving this beer its light texture, complexity, and smoothness.

The water, roughly 900 hectolitres (or 90000 litres) was literally trucked here from Ottawa and was used to make 10 batches of beer at Mill Street's brewing facilities.

Manning explains that it's actually a lack of mineral content that makes Ottawa water better suited to this refreshing style of beer. "Think of rainwater that has run over the Algonquin Shield and made its way into the Ottawa Valley system," he says "it has picked up very little mineral from the rock during this brief contact time."

Toronto water, on the other hand, has a much higher mineral content which can increase the perception of bitterness. That is, you can add similar bittering elements to a Toronto-made beer and an Ottawa-made beer, but Toronto's harder water means that the mineral holds the bitterness on your palate.

Or, put simply, soft water makes for soft and smooth beer. "Ottawa water is around 35 ppm hardness compared to 150 ppm hardness in Toronto water," Manning explains, making me giggle like a tween at the word hardness.

Not only is the beer a nod to Ottawa for its water content, but it's also a fitting tribute to Ottawa's brewing history. The traditional cream ale, fermented twice, once with ale yeast to produce a creamy, robust taste and then again through a secondary fermentation with lager yeast to develop a smooth and mellow character, is made in much the same way beer would have been made by breweries like Bradings Brewery, Union Brewery, and Capital Brewery, breweries that existed in the west end of Ottawa along the Ottawa River in the 19th and early 20th Centuries.

Of course, those brewers probably never imagined someone would be replicating their process with the same water 100+ years later, 450 kms away. 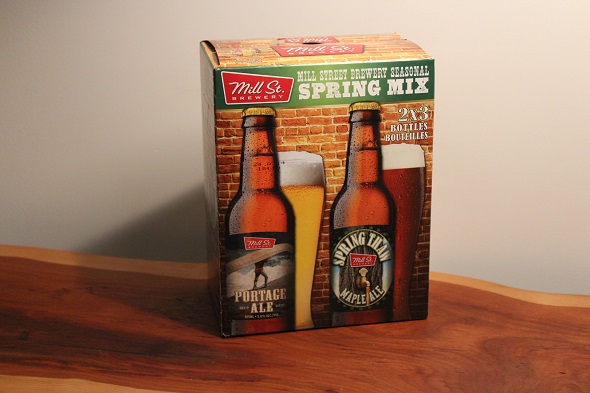 You can find Portage Ale in Mill Street's Seasonal Spring Mix Pack along with their returning Spring Thaw Maple Ale. The Spring Mix six pack will be available in early March at the brewery and at the LCBO for $13.45.

Ben Johnson also writes about beer over on Ben's Beer Blog. If you're cool, you'll follow him on twitter @Ben_T_Johnson.