On the flip side, there's some really great food-centric feeds too; Toronto chefs sharing their own gastronomical creations and praising their peers as they eat around town; home cooks utilizing local produce and products. There have even been instances when a snap of some daily special has motivated me to get up and get it while it lasts. Here's our list of 15 feeds that'll whet your appetite for what Toronto's cooking. 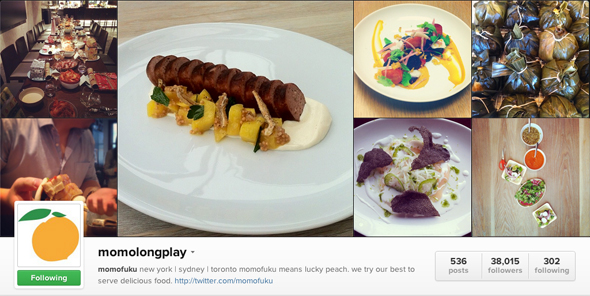 Momolongplay
Covering the happenings at all New York, Sydney and Toronto restaurants, this Instagram account documents the culinary creations, collaborations and events at Momofuku.

Scott Vivian
The owner of Beast Restaurant is known to show off his own gastronomical creations and menu features. He's also one of the founders of the Group of Seven Chefs and travels frequently making his photo feed a culinary tour of what's what.

Andtru_Misfits
As the owner of both La Carnita and The HOTB, Andrew Richmond's Instagram offers the best selects from both restaurants intermixed with street art and commissions from international talent. 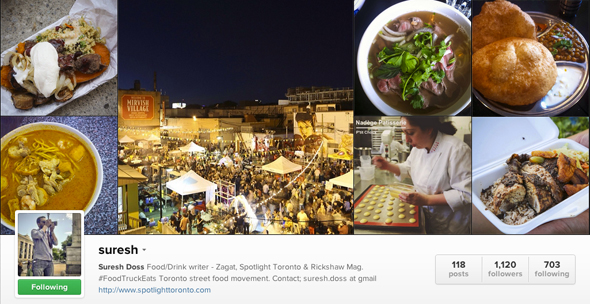 Suresh
Suresh Doss is the food and drink writer for Zagat Toronto. His photos are stunning, his captions super long, but more impressively his instagram has recently featured behind the scenes videos in kitchens and bars across town.

foodpr0n
Indie blogger, foodpr0n documents her own home cooking along with adventures eating out at restaurants and festivals across the city.

OCTA
An excellent source for roadtrip inspiration, this non-profit resource is devoted to promoting culinary tourism in Ontario covering Toronto and beyond.

Rob Gentile
See what's cooking at Buca as chef Rob Gentile showcases what's on the menu and teases at what's to come from the still expanding empire of Italian restaurants.

Freshcanteen
This delivery service previews weekly menus on Instagram and then sends the fresh ingredients and recipes direct to your door. Best of luck replicating these photo-worthy meals at home. 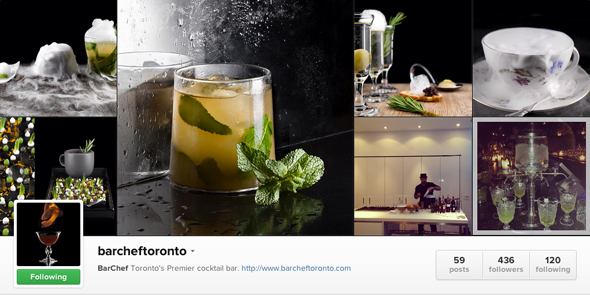 barcheftoronto
Marvel at how well this cocktail bar knows its way around a camera... not to mention dry ice.

foodie411
As the producer of Death Row Meals pop-ups, Joel Solish is hooked up with some of the city's top chefs. His adventures eating out are fun to follow but he's also introduced be to plenty of local products available at independent retailers.

tastetoronto
Brad Wishen harnesses the power of Toronto diners everywhere, amalgamating food photos of drool-worthy dishes from restaurants all around the GTA.

bakerbotsbaking
Scrumptious baked goods and food-focused travels from the owners of this tiny bakeshop near Ossington station.

foodtrucksto
Follow our sister site, and keep up to date with food trucks as they roam around the city and see what's new on their ever-changing mobile menus.

ClaudioAprile1
The chef and owner of the Origin Restaurants posts stunning photos of his own culinary creations plus sneak peaks of Masterchef Canada filming.

Want to see where I'm profiling next? Want to see what I eat on my days off? Follow me, Liora Ipsum - I'm not above shameless self promotion.

We're sure to have missed a few smartphone wielding cooks and eaters. Help complete the list in the comments.