The Weston Farmers' Market offers a range of produce and baked goods to residents of the Weston and Lawrence area every Saturday from 8am to 2pm. The market is located in a Green P Parking lot at 14 John Street, just off Weston. After passing several stark commercial blocks filled with fast food joints and convenience stores to get there, the market feels like a haven of fresh fruits and veggies, handmade treats, and neighbourly warmth.

The number of produce vendors was a bit limited during my recent rainy-day visit--only about a half-dozen or so--but I was told from regulars that the market picks up significantly from August until the end of the season (October 26th). A couple large stands sell grocery store-variety produce (including evidently non-local fare, like bananas, mangoes and US-grown fruit), but there are also several smaller Ontario farms represented. If you're looking for organic products, however, you won't have much luck at this market.

What really makes the Weston Farmers' Market stand out is the strong representation of bakeries and restaurants from the area and other parts of the city. These stands provide a taste of local flavours and offer a tempting array of sweet and savoury treats.

Here are some noteworthy vendors at the Weston Farmers' Market. 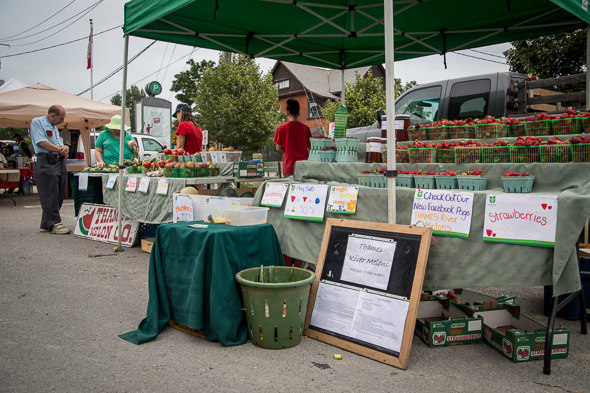 Thames River Melons
Despite the name, this Innerkip, Ontario farm sells not only melons, but berries, veggies, and honey as well. When I stopped by, the vibrant display of produce included garlic (picked the night before), garlic scapes, tender asparagus, and rhubarb. I couldn't resist grabbing a pint of their sweet and juicy strawberries for $4. While the produce isn't organic, I was told they try to spray as little as possible. 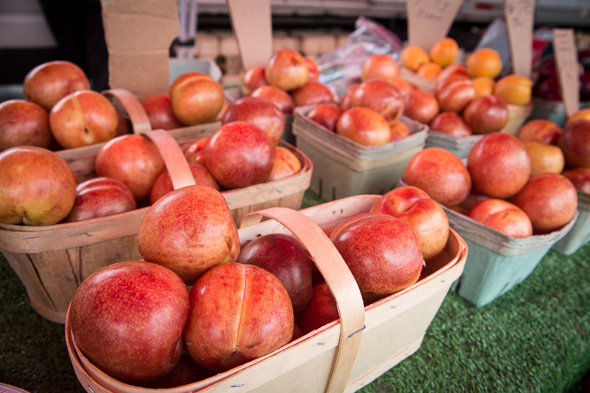 Lincoln Line Orchards
Hailing from Smithville, Ontario, this family farm has been around for over 40 years, growing several varieties of apples, pears and plums, and has been coming to the Weston Farmers' Market for about 14 years. The Jonagold apple I sampled ($9 for a basket of 9-12) was crisp and juicy, hinting at great flavours soon to come during prime apple-picking season. The market stand also sells cider ($4/2L), applesauce ($4/0.5L), and apple butter ($6/0.5L). 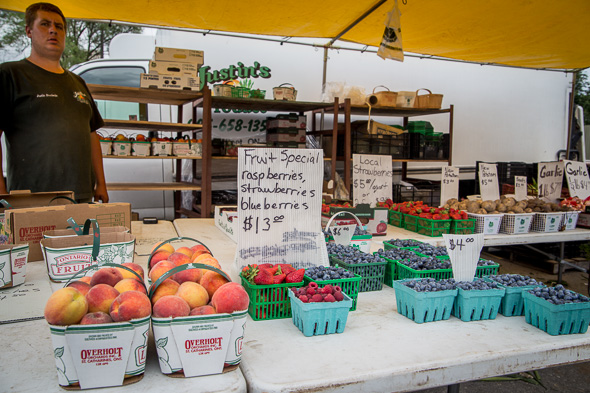 Justin's Produce
Justin sells fruits and veggies from his farm and neighbouring farms in Wainfleet, Ontario. He told me his vibrant red strawberries wouldn't be around for much longer, but he also had plump shelling peas, garlic, and potatoes available that day, and will offer a wide range of fruits and veggies throughout the season. 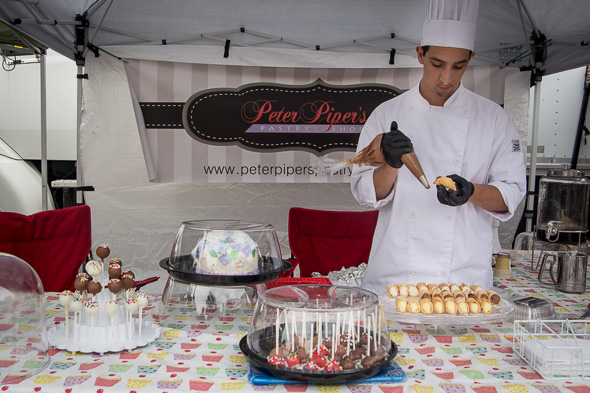 Peter Piper's Pastry Shoppe
Weston area resident Peter Maida launched his own pastry business in 2012 after studying Culinary Arts at Humber. His neighbourhood pride was evident during our brief chat, as he eagerly talked about other local businesses, in addition to his baked treats. At the market, you can pick up his biscotti ($5/6), cake pops (50 cents each), and cannoli ($1), which he was freshly filling on site. My blueberry almond biscotti was perfectly crisp and subtly sweet, just the way I like it. 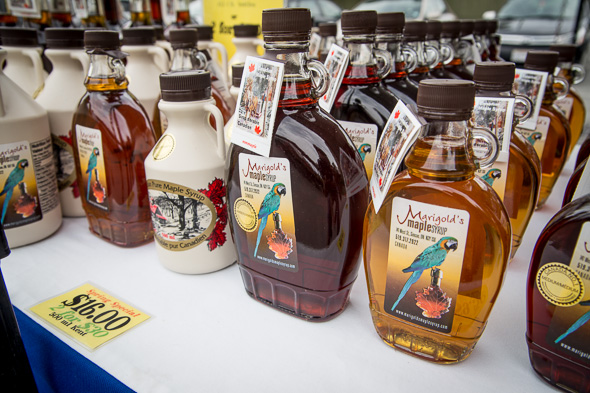 Marigold's Maple Syrup
Farmer Brian Hamilton sells light and amber varieties of maple syrup from his Simcoe farm at the market ($16/0.5L or $9.50/250mL), as well as a range of maple candies. My sample of light syrup had a pure maple flavour, and the maple toffees (25 cents each) made for a sweet pick-me-up later in the day. Hamilton explained that while he's not certified organic, he practices organic farming and his syrup is all-natural. 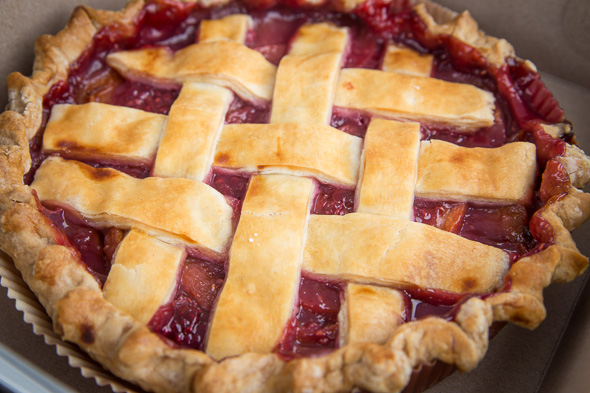 The Canadian Pie Company
It's impossible to walk by The Canadian Pie Company's market stand and not stop to admire the display of beautiful pies, with their golden flaky crusts and range of sweet and savoury fillings. The stand sells fruit pies for $16, as well as meat pies and quiches ($6 and $4, respectively). This Toronto-based bakery makes its goods without preservatives or hydrogenated oils, using locally sourced ingredients. 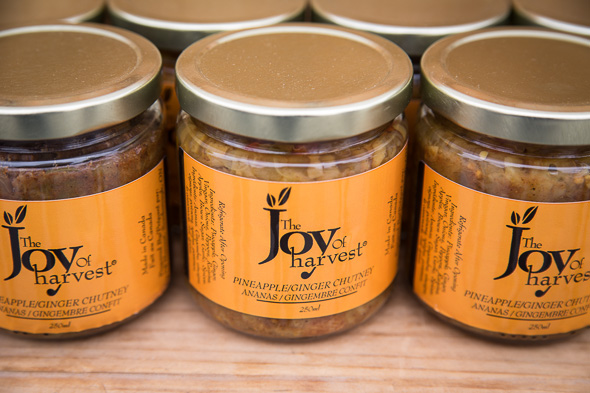 The Joy of Harvest
This Scarborough-based company has been selling jams, chutneys, hot sauces, jerk sauces, and BBQ sauces at the Weston Farmers' Market for about 10 years. The fruit jams and jellies include exotic flavours like guava (the owner's favourite), as well as traditional varieties like strawberry, raspberry and mixed berry ($6/250mL). After sampling the spicy red pepper jelly, I'm confident the hot sauces live up to their name. 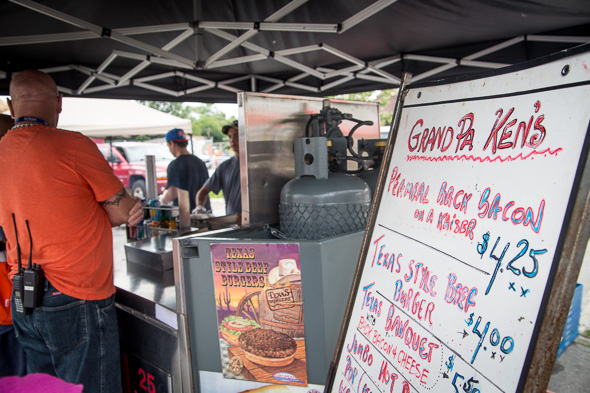 Grandpa Ken's
By 9:30am, there was already line forming at Grandpa Ken's grill, and with the succulent smell of bacon filling the market air, it was easy to understand why. One local resident told me he comes to the market every week only for the "world famous" back bacon on a Kaiser ($4.25). This Etobicoke-based company also grills up burgers and dogs, and makes appearances at other markets, concerts, and events across the city. 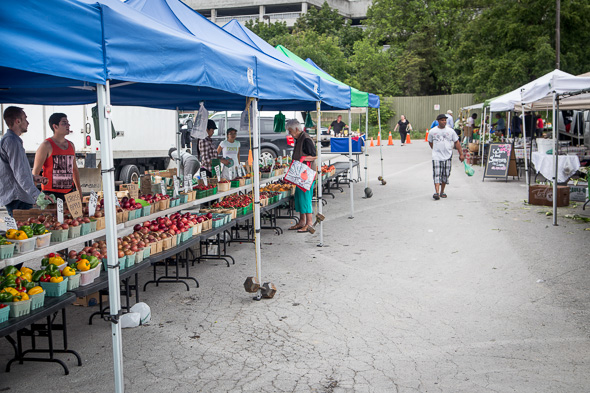