The SickKids Farmers' Market comes to life every Tuesday morning until the end of October on the driveway of SickKids Hospital at 555 University Avenue. From 8am to 2pm, about 20 vendors sell an array of produce, meats, cheeses, baked goods, and other delights in the cool shade of the lush, tree-lined hospital entrance.

For hospital staff, patients, hurried University Avenue pedestrians, and nearby office workers (including yours truly), the SickKids Farmers' Market is great for picking up a tasty snack or some fresh dinner ingredients. During my recent lunchtime visit, I couldn't help but notice the predominance of professionals in scrubs or business casual attire, grabbing some berries to enjoy later in the afternoon or taking a break to indulge in a freshly baked treat. Fortunately for me and my fellow market-goers, the market continues through the winter, every other Tuesday, from inside the hospital.

Here are some of my favourite vendors from at the SickKids Farmers' Market.

The Food Smythe
While I indulged in a couple samples, Dave Smythe explained that he strives to showcase Ontario's artisan cheeses that may not get the exposure they deserve in Toronto. Based in Prince Edward County, Smythe has been selling cheeses at various farmers' markets for five summers now. Some fine cheeses for sale during my visit included Primeridge Pure, Fifth Town, Glengarry, and Gunn's Hill. 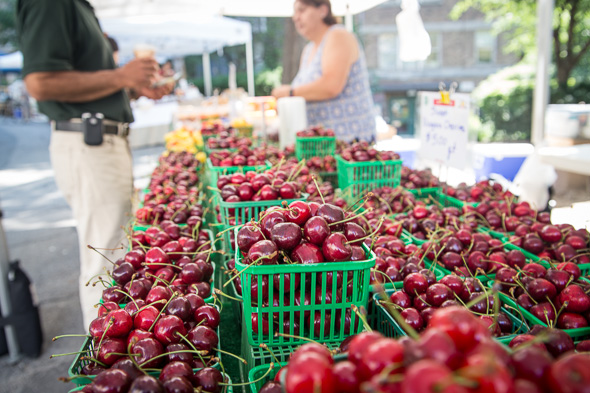 Loffredo Fruit Farms
Numerous University Avenue pedestrians couldn't resist stopping to grab some of Matteo and Angela Russo's delectable fruits, like juicy peaches and golden plums ($5 and $4/quart, respectively). The Russos have been farming for over 30 years, and grow cherries, peaches, plums, apricots, apples, and pears on their St. Catharines farm. The Russos also sell homemade buttermilk fruit muffins for a dollar, as well as pies and loaves, and by noon, only a few baked treats were left. 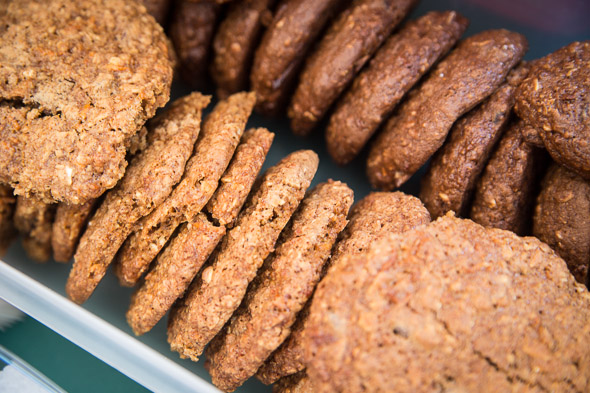 Round Plains Plantation
I love sweet potatoes, but farmers Bob and Juli Proraki love sweet potatoes, and exclusively grow this crop on their Waterford, Ontario farm. Round Plains sells several intriguing varieties of sweet potato, like Bonita, Beauregard & Covington, Satsumaimo, and the deep purple Murasaki ($5/small basket, $8/large basket). The organically grown spuds are also featured in the many dips and baked treats for sale, including latkes, muffins, brownies, waffles, and cinnamon buns (with several vegan and gluten-free options available). I was one of several hungry office workers lining up for a moist sweet potato cookie as an afternoon treat--far more appealing than a trip to the vending machine ($1 each). 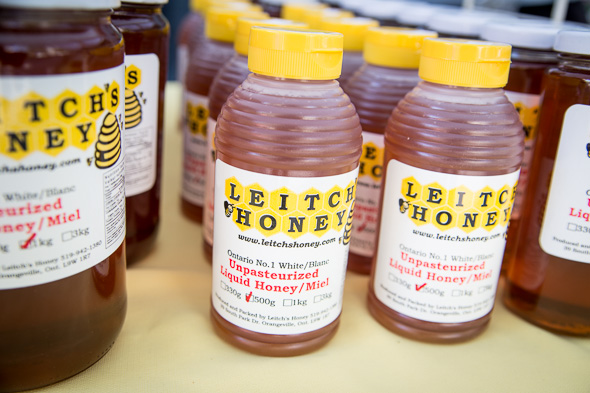 Leitch's Honey
For Randy Leitch, it's simple: "honey's the perfect food, just the way it is." He has been keeping bees for 39 years and produces almost any type of honey and honey product you can imagine. In addition to your standard unpasteurized liquid honey ($10/kg), Randy also sells comb honey, buckwheat honey, bee pollen, honey butter, honey mustard sauce, and beeswax candles. My mouth watered a bit when imagining the taste of his cinnamon creamed honey melting on hot toast, but I was also curious to try the maple and fruit-flavoured varieties ($6.50/500g). 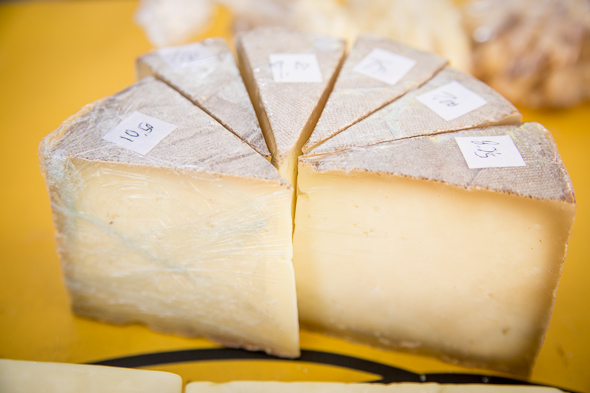 Monforte Dairy
The infocard available at Monforte's stand asks, "what trumps the sheer sensual deliciousness of a well-crafted cheese?" While sampling the Bliss triple cream Brie, it's hard to think of many credible contenders ($8-$12 for a small wheel). Oh sweet Brie-sus, this cheese is pure heaven (pardon the terrible pun). Made with cow's cream and sheep's milk, it's rich and buttery in taste, and incredibly creamy in texture. Monforte's range of artisanal cheeses are made mostly from sheep's milk, as well as cow's, goat's and water buffalo's milk. The cheeses are also antibiotic-free and made seasonally based on the animals' natural milking cycles.

Footstep Organics
I couldn't pass by Footstep Organics' stand without pausing to admire the dark wicker baskets filled with a vibrant rainbow of veggies. With the support of FarmStart, Paul Stewart and Shira Katzberg grow more than 50 types of vegetables on their two acre plot in Brampton, including deep purple and golden beets, multicoloured cherry tomatoes, and carrots in orange, purple and yellow shades (all generally priced at $3/bunch or $4/basket). 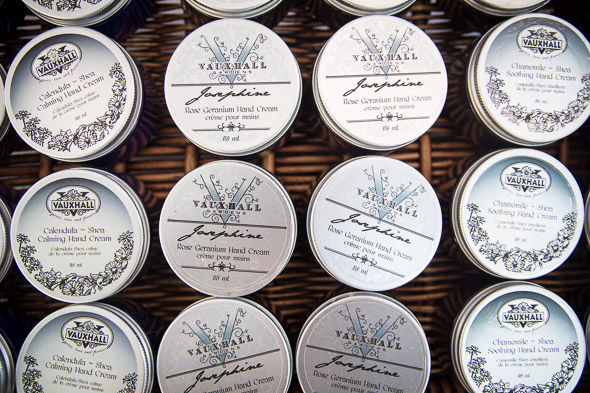 Vauxhall Gardens
In between serving customers, Adele Hinshelwood told me she has been growing botanicals for over 25 years, and has always been interested in the intrinsic power of plants. She grows and extracts botanicals on her Grimsby farm to produce soaps, creams, hair products and infused oils that are perfect for pampering. I was particularly tempted by the Calendula Revitalizing Foot Butter ($10/118mL) to help keep my feet in sandal-ready shape this summer, and the Rose and Rose Geranium Facial Serum ($20/50mL) to show my urban-dwelling, sun-soaked, and sleep-deprived visage a little TLC. 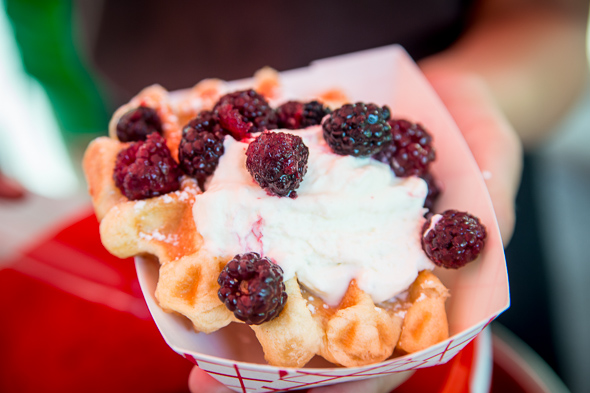 Waffle Bar
Hungry lunchtime shoppers were easily drawn in by the sweet aromas emanating from Jan Vandenbroeck's waffle stand. Waffle Bar sells Liege-style waffles in packs of six ($15), or served fresh with fruit and cream to satisfy your sweet tooth ($5). As good as those options looked (and smelled), Jan's bacon and egg waffle is the showstopper ($8). Made with bacon bits and green onion inside the dough, the waffle is then topped with a fried egg, cheese, and a drizzle of sweet maple syrup. The McGriddle ain't got nothing on this. 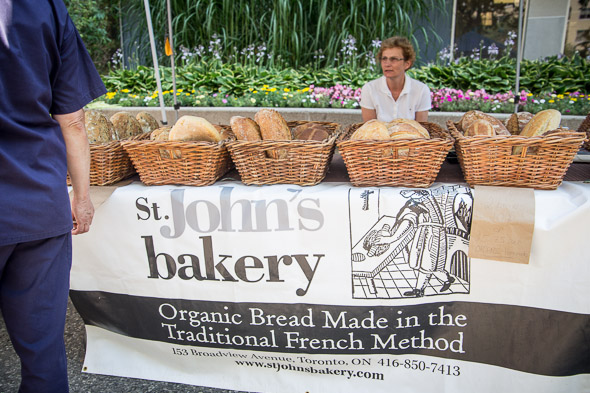 St. John's Bakery
This Toronto bakery, located near Broadview and Queen, makes traditional French-style breads that are sold in its retail location as well as at various farmers' markets, cafes, and grocery stores in the city. The St. John's volunteer working at the market described how their breads are mostly sourdoughs and made with organic flour. The baked goods for sale include baguettes ($3.50), multigrain, rye, and white loaves ($5.75), and specialty flavours like olive bread ($6.75). For a sweet treat, St. John's also sells cookies, banana bread, and scones. Be sure to come early, though--by mid-day, only a handful of loaves remained. 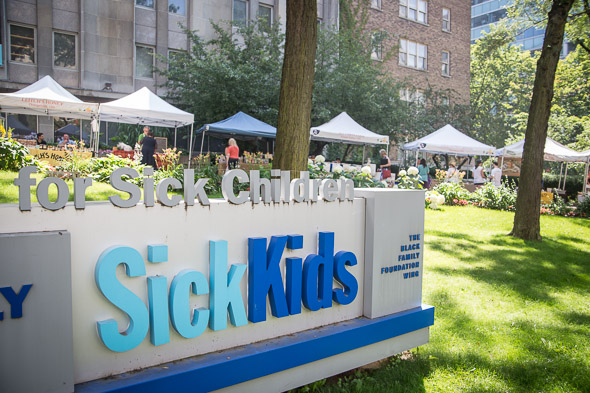