The Nathan Phillips Square Farmers' Market is located predominantly on the North and East side of the square. This market begins annually in June and lasts until mid October, running every Wednesday, between 8am-3pm. A popular market for office workers, condo dwellers, and tourists coming to see bands play at the stage, especially during Fresh Wednesdays where food vendors are slated to share the market's venue on the square.

Some of the farms affiliated with the Ontario Farm Fresh Marketing Association (OFFMA), have been selling at the Nathan Phillips Square Farmers' Market since its inception in 1990.

Here are some of the vendors to look out for.

The Pop Stand
Kari Marshall is a local city vendor who sources fresh ingredients, from other local farmers' markets in the GTA, to make Popsicles. Delivering creative flavours such as, Kentucky Bourbon -Apple Cider and Ginger-Thyme-Basil, these are icy treats for hot summer days at the market! 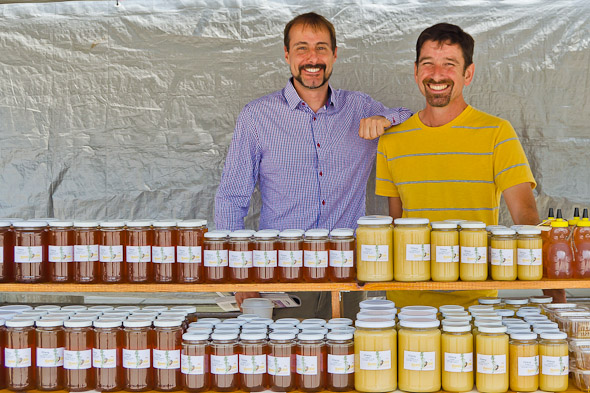 Elfsong Apiaries
A glass observation home, encased hundreds of bees on a honeycomb, attracted a dozen school kids to the honey habitat. Mark Wilson has been selling his 4-5 variety of honey (it varies year-to-year), clover honey being one of the more popular staples throughout the year. Alongside the honey table, seasonal flowers; peonies, sweet peas, and zinnias, can be found when they bloom.

Thames River Melons
Located in Innerkip, Ontario, Thames specializes in cantaloupe and watermelon, which usually comes out towards the end of July. Right now, however, strawberries, rhubarb, and asparagus, are abundant on their table. The organics they have are garlic and garlic scapes. Added value, to your purchases, is the free printed recipes incorporating their seasonal produce. 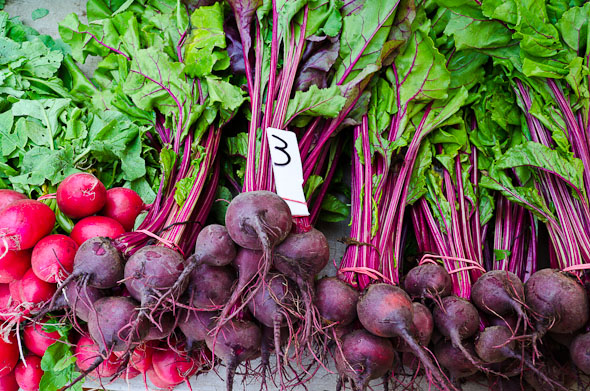 Daniel's Farm
This tiny family farm from Holland Marsh states, "No Pesticides and No Herbicides" on any of their, kale, Swiss chard, lettuces, green onions, and beets. They take pride in their small crops, which they grow for themselves. What they don't use is shared at various farmers' markets across Ontario.

Domenic's Meats & Bakery
Smoked dry-cured meats, sausages, including smoked bone treats for dogs, and baked goods are sold out of their impressive silver trailer they use to get from one market to another across Ontario. From Lakefield, Ontario this family business boasts their popular rye breads to be a draw in the baked goods section. 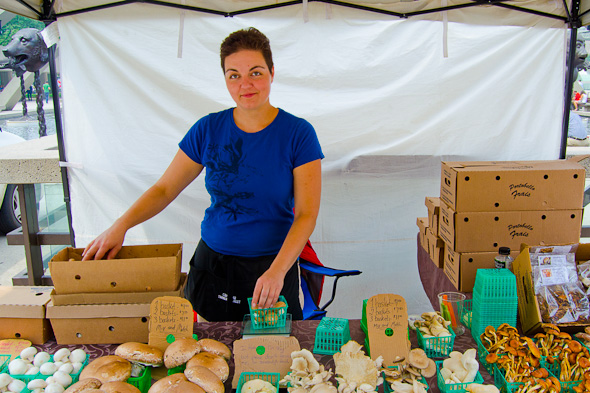 Warner Farms
From Beamsville, Ontario's near St. Catherines region, this farm offers up a wide array of fruit, such as, apples, peaches, pears, plums, apricots, cherries, nectarines, berries, and grapes. Dried apple, apple cider and apple cider vinegar are also made with their own apples. 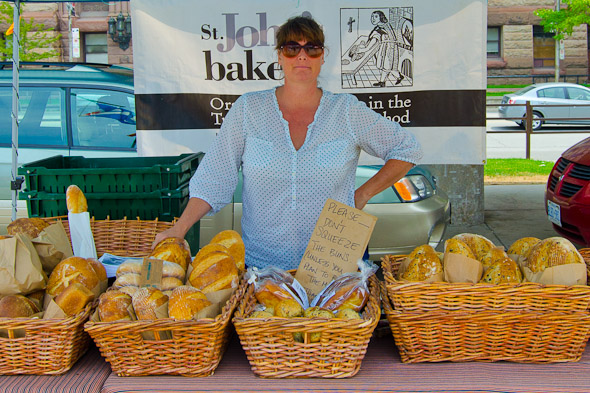 St. John's Bakery
A non-profit social enterprise, operated by St. John's The Compassionate Mission on Broadview Avenue, offers handcrafted breads at the market. They use organic ingredients for all their baked goods, such as, olive, cilantro, and Celtic-multigrain breads.

Hillsview Greenhouses
Fresh peppers, tomatoes, and peas are amongst their wide selection of produce from their farm in Lucknow, Ontario. "Homegrown Chemical Free" is proudly advertised with their organic vegetables and herbs. 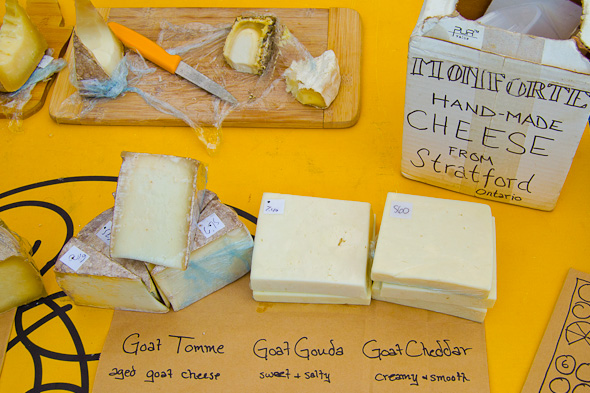 Monforte Dairy
Owner Ruth Klahsen, a veteran chef based from Stratford, Ontario, produces an array of artisanal cheeses made with sheep, water buffalo, goat and cow dairy. Their processes are fresh-pressed using the most natural dairy ingredients. Most of their delicious cheeses can be sampled before purchasing.

Jack's Produce Farm
Over 30 varieties of fresh fruit and vegetables can be found from this farmer from Niagara-on-the-Lake. Strawberries are usually the big draw in June but they are known to have some of the best Ontario peaches later in the summer. 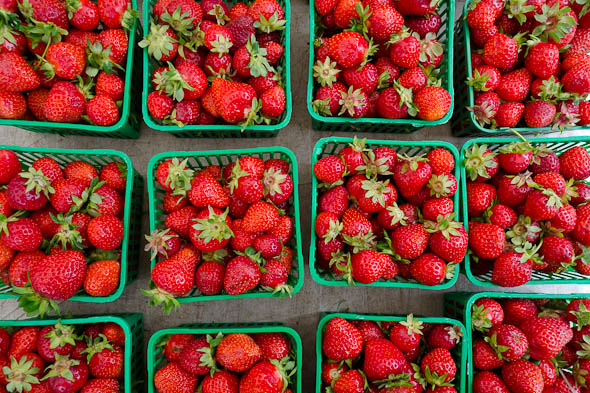 Willowtree Farm
This Port Perry, Ontario farm practices environmental, sustainable, low-spray techniques for all their produce. Abundant strawberries and asparagus can be found amongst the fresh fruits and vegetables at their tables.

Bentford Orchards
Clay Eborall, offers up tasty strawberries, raspberries, and peppers among other produce from the orchard located around the Niagara region. Customers are gravitating towards strawberries as they are in season for June. 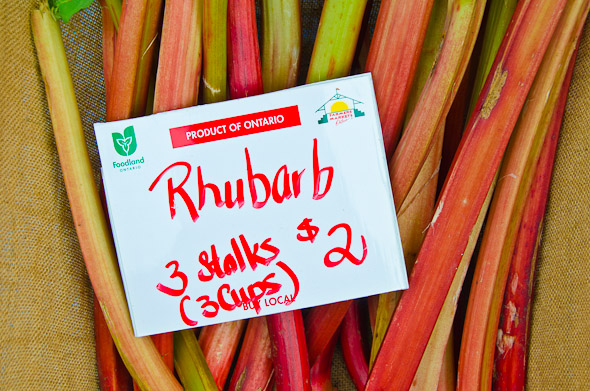 Andrew's Scenic Acres
Based in Halton Hills, on a100-acre farm, nestled on the Niagara Escarpment, this farm promotes group tours and "pick-your-own" berries. Amongst berries, asparagus, rhubarb, and strawberries, fresh baked pies and tarts, from Baxter Kitchens, are also available at $5.50 - $11.00. 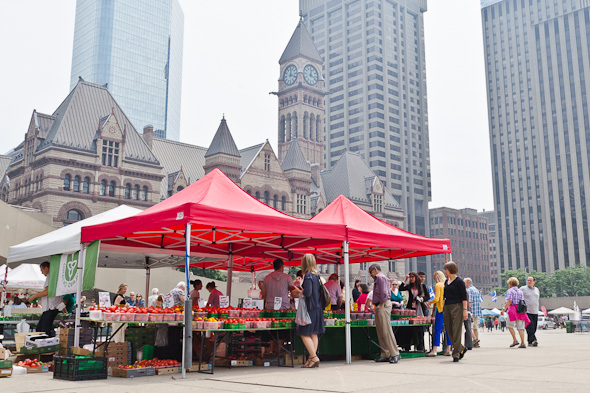