After attending school together in Waterloo, the two founders spent a year together Down Under before relocating to Toronto where they spotted an unfulfilled niche in the Hogtown food scene for the traditional Aussie dining practice of having a pie in one hand, and a pint in the other. 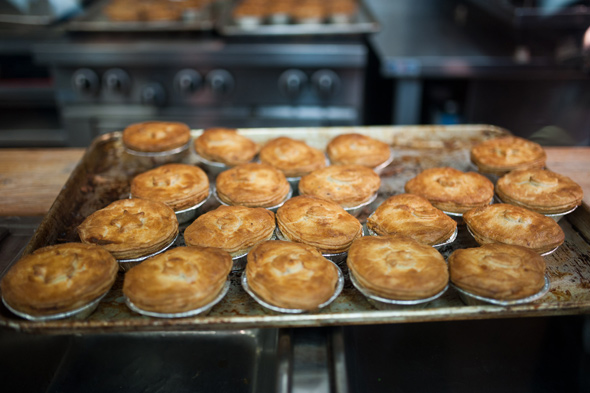 Utilising Sanagan's locally sourced meat, they began working on mastering the style they remembered from Oz. Collaborating with their friend Monica on perfecting the crust, they ran through over 100 different recipes before finally settling on a 100% butter puff pastry.

'We were just three girls with a rolling pin', recalls Erynn. Finally launching in October of 2012, they took a test run of 500 pies to TUM, and sold out incredibly quickly. Repeating the feat again persuaded the pair to push their passion project forward, and the deal with Sanagan's soon followed.

The debut line-up features four different recipes. The Traditional Aussie pie is minced beef with a savoury tomato and vegemite gravy, whilst the Steak'n'Bacon is braised in Amsterdam's Nut Brown Ale. Also available are Butter Chicken and a Creamy Zucchini (roasted zucchini, in a garlic cheese sauce), all retailing for $6. 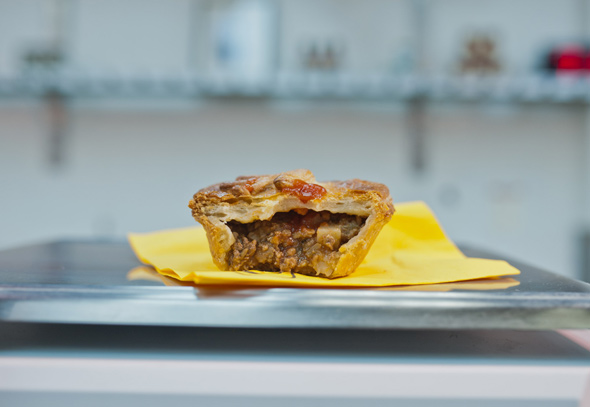 If you want to meet them, or live west of Downtown, they'll also be hosting launch events when their pies go on sale at Hot Oven Bakery's locations at both Kingsway (Friday 6th to Sunday 8th September for the Taste of The Kingsway Festival) and Roncesvalles (for the Polish Festival on September 14th and 15th), where you'll also be able to sample the pies with their delicious home-made ketchup.