In search of perfection at the Toronto Wing Festival

One celebrity host, four media-industry judges, 10 restaurants, 600 tickets, three winners and 20,000 wings served. Such was the outcome of the Toronto Wing Festival held at 99 Sudbury.

Our host for the evening, celebrity TV chef, Bob Blumer of the Surreal Gourmet, Glutton For Punishment and World's Weirdest Restaurants, may not have cooked wings on his show before but he admits, he is "a closet wing fanatic," at least when it comes to a wing fest. Wasting no time, I dove straight in. 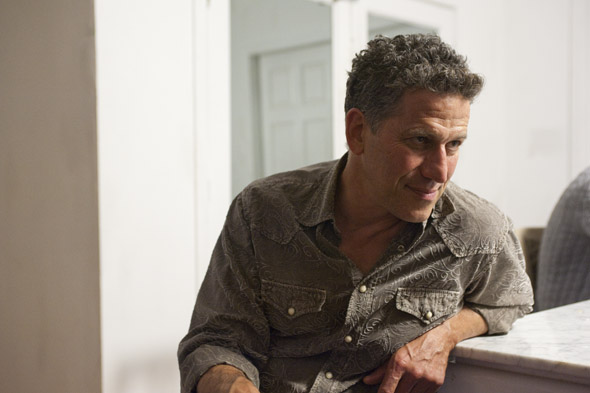 Real Sports Bar had real sports wings. I understand why they won last year's people's choice award, and why they won it again this time around. Imagine a coconut-breaded shrimp, but with the batter coating a chicken drumstick instead, and then doused in flavours like Thai Sweet Chili, or Go For Gold (golden barbecue sauce and jalapeno). If you buy them at the bar ($14.99) they are a bit pricier than what you would usually pay, but they are a fairly unique experience nonetheless. 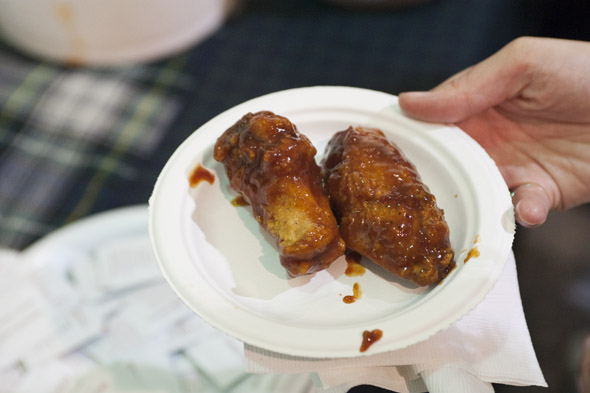 While Real Sports had surprisingly no line, their neighbors Right Wing had a steady flow of traffic, which wasn't the end of the world. There's something about waiting in line that is probably good for digestion. Available were a standard Medium BBQ and an anything but standard Exorcist wing flavour. I don't know how many millions of Scoville units were in the sauce, but I was warned, and given a swag bag just for trying them. Luckily I have had my oral cavities scorched by insanely spicey wings before, so my caution paid off. I took a bite, and waited for the rollercoaster ride to begin. A slow peak lead to a 10-minute ordeal of mouth burning, sweats, while I literally hotfooted on the spot to keep myself sane. 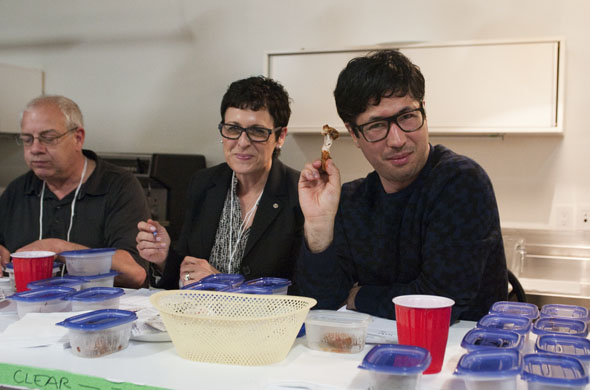 Which is close to the position that I found judge and Canadian media personality, Nobu Adilman of the Food Network's hit show Food Jammers. "This is actually my first time judging wings, but I have judged chowder before," he tells me in all seriousness, eyes slightly tearing up from the insanely hot chili of the Exorcist. "I'm an avid eater of wings, but I found it very challenging to keep my hands clean and judge them properly on the score card." I empathized deeply, as I was having similar issues with my own note taking. 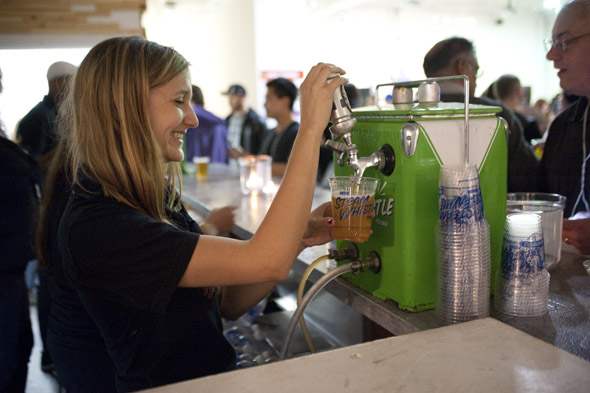 Without crackers to cleanse his palate with, Adilman was forced to resort to...gasp.... beer! "It felt like I was traveling around the world. Some times I thought I was in Asia, other times I was in the Southern US, or eastern Canada. I felt like some chefs were inspired by architecture or design. Like one of the wings actually looked like a 1970s chesterfield, it had that weird plaid texture on it. The one with plantain chips (from the Tilted Kilt) was quite wild, and one even looked like vomit, but I got excited because I wanted to vomit with it, it was like good vomit. It was super hot and super tasty." 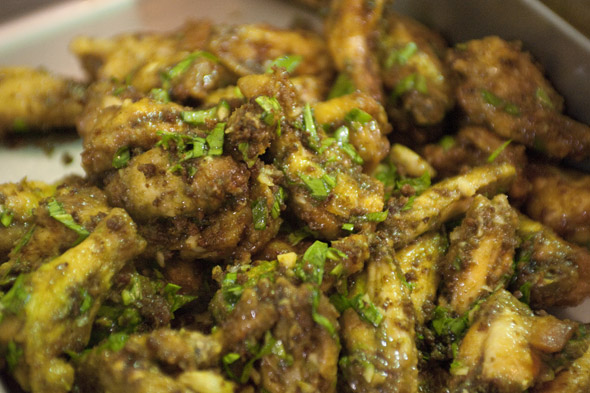 Perhaps they came from Hey, Meatball's Rod Bowers, who's wings took home the best 'exotic' category for their take on a Korean sauce smothered in scallions, sweet red pepper paste, and Korean hot peppers. The other offerings were their unique Honey Garlic wings marinated in pickled Ontario garlic, wild ramps (a breed of leek), scallions, bacon, and maple syrup instead of honey, for a real Canadian flavour. 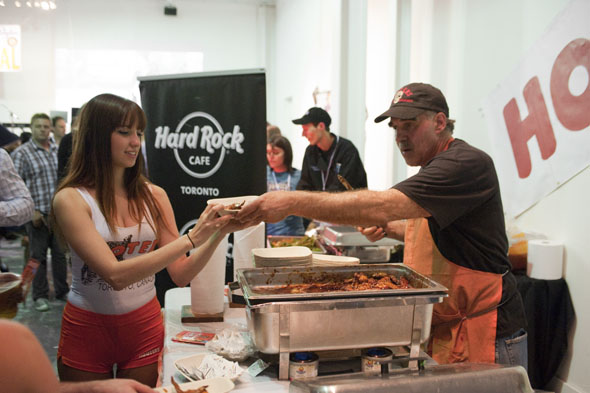 They definitely didn't come from Hooters, who although took home the best in the classic wings category for their Daytona flavour, were skimpy in size (ironic considering it's Hooters, right?) had a rubbery consistency (well that rings true at least) and were over all mild in flavour with a low sauce saturation in the meat. 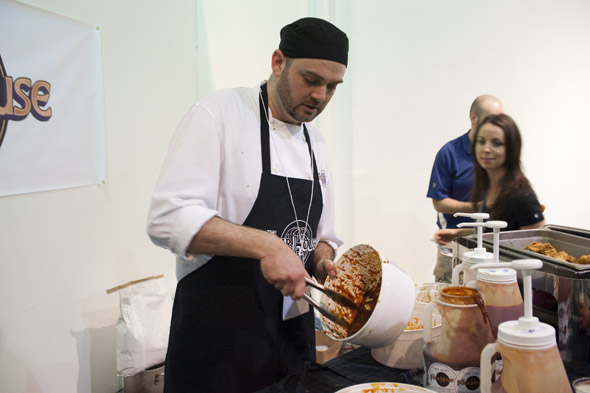 The Pour House servers, Av & Dav's longstanding Irish institution, were dunking their heavy battered Kinsale County wings in either a tangy Raspberry Chipotle sauce bucket that tasted a bit like a raspberry salad dressing, as well as Chili Lime option. Special mentions also must be given to Whistler's Grille, who boldly went with the underdog dry spice rub, a preparation that tends to give way to a homier flavour, but healthier too, as they were baked in the oven and delicately flavoured. 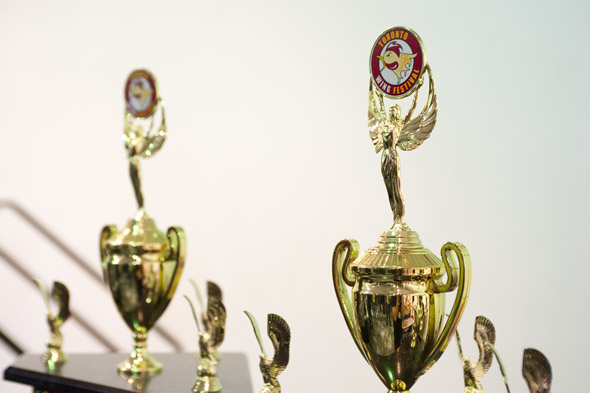 The event is only in it's toddler years but some of the big chains were stepping up their games with swag bags from Hard Rock CafĂŠ, who's wings were actually exceptionally tangy, and were a winner in the classic section in the year before. 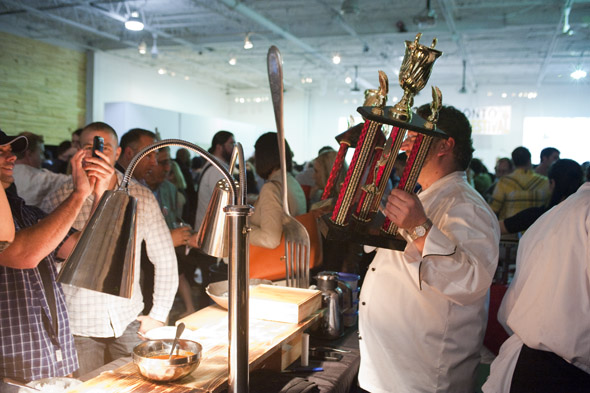 The Toronto Wing Festival will be returning next year, in steroidal proportions, upgrading from a few hundred-person event, to one of a few thousand.