Toronto chefs duke it out for the title of noodle king

Almost 700 hungry noodle lovers packed the Glass Factory on Saturday as 11 restaurants came together for SLURP! Noodlefest, Part 2. Joined by a cafe and four local brewers and distillers, the sold-out event gathered some of the best names in the industry to celebrate the staple dish in all its starchy glory. 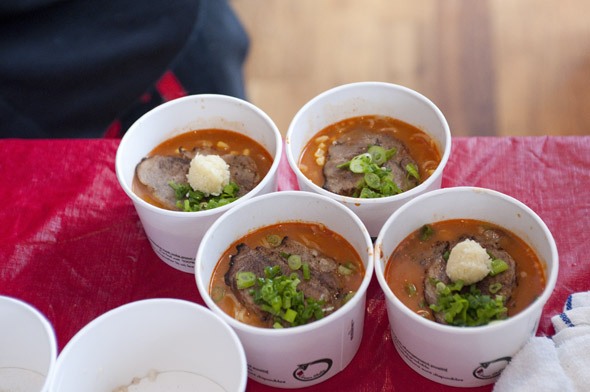 The concept remained unchanged from its predecessor - each vendor brings a noodle dish ($5), and along with some sides ( 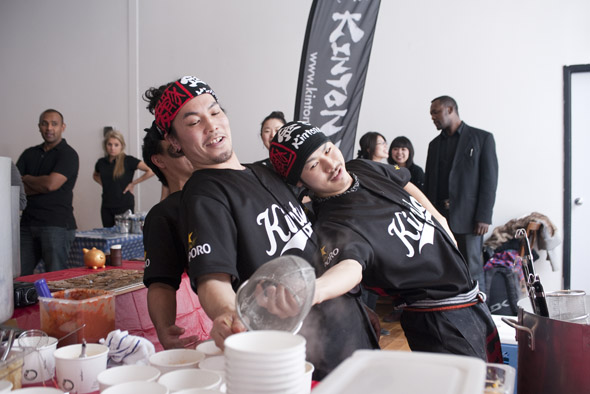 Drawn by Kinton Ramen's reputation for long lines and excellent noodles, many attendees made a beeline for their stall first thing, and Kinton was happy to deliver on both fronts. Their staff was entertaining to watch as they recreated their signature Spicy Garlic Ramen, shouting loudly in Japanese and bending backwards to drop noodles into paper bowls as a chef seared pork slices with blow torches up front. 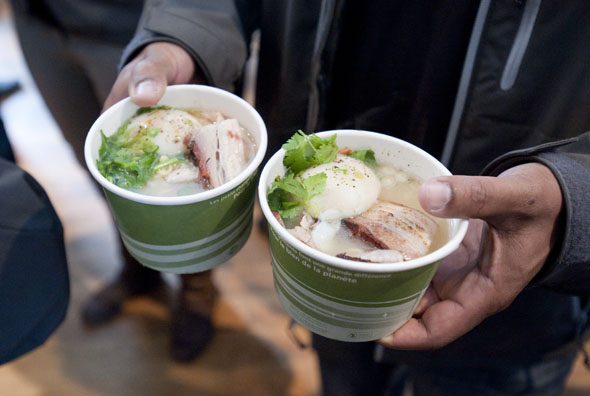 Unlike Kinton, many of the other vendors veered from their regular menu and created special dishes especially for this event. A clear crowd favourite emerged for Nota Bene's Wood-fire Bacon & Egg Ramen bowl with optional Pork-Truffle foam. The creamy soup base, springy noodles, perfectly done slice of thick bacon and souveed egg was well worth the almost 20-minute wait. Nota Bene also crafted a Hawaiian Pineapple-scented Kombucha, and Lemongrass, Ginger & Kaffir Lime Leaf Iced Tea, both well thought out complements to noodles-and-broth. 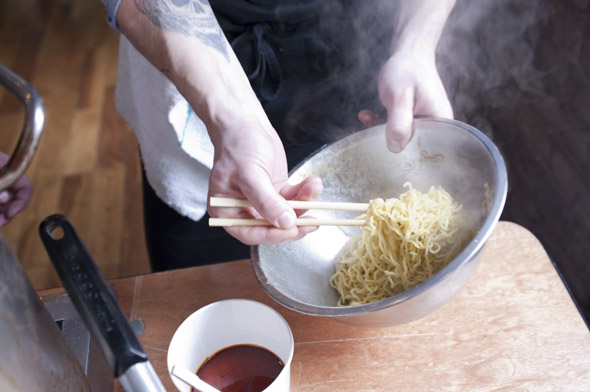 Apart from ramen, there were many other types of noodles featured. Samuel J. Moore elevated the familiar chicken noodle soup with a delicious fried chicken skin topping, and Lamesa cheerfully explained Filipino culture as they served out Chicken & Shrimp Sotanghon. 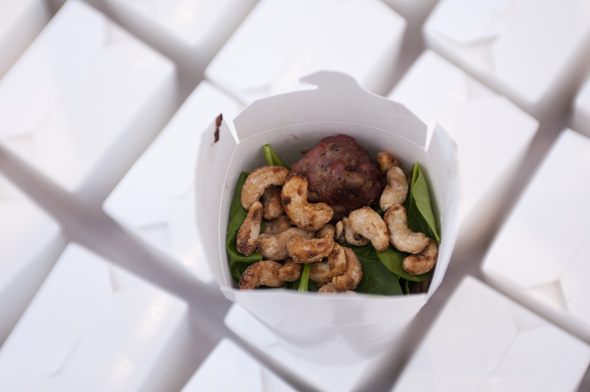 Momofuku Toronto's Spicy Noodle with Schezhuan Pork Sausage Meatballs was chilled, a nice change-up, and their pork bun with hoisin sauce was filling, and so juicy that it made my hands oily. FeasTO's panfried "What the Pho?" dumplings were definitely inspired, a deconstructed bowl of pho wrapped in paper-thin dough with a cheeky name. 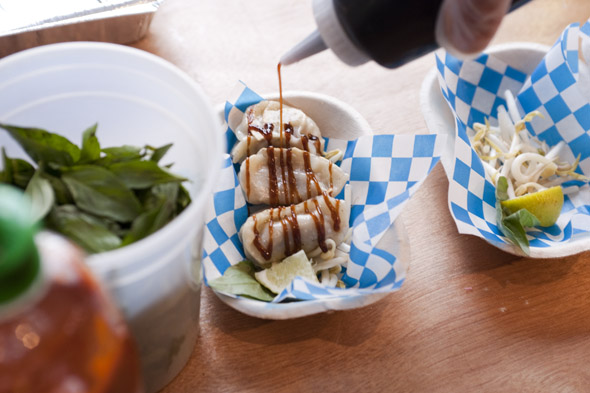 Although Pizzeria Libretto and The Drake both chose to use guanciale (pork cheek) and rapini in their Italian-styled noodles, their flavour profile was surprisingly different. Pizzeria Libretto used fatty cuts of guanciale, curing it so that its texture was almost like calamari, and starchier noodles made only from water and flour with a light pork bone and chicken broth.

The Drake's was more complex, starting with an earthy porcini broth, sous-vide guanciale, and topped with crunchy kale chips, shaved pecorino toscano cheese and balsamic pickled egg that was sat in a balsamic and red wine reduction. The burst of flavour from the egg gave the noodles a surprisingly delightful kick. 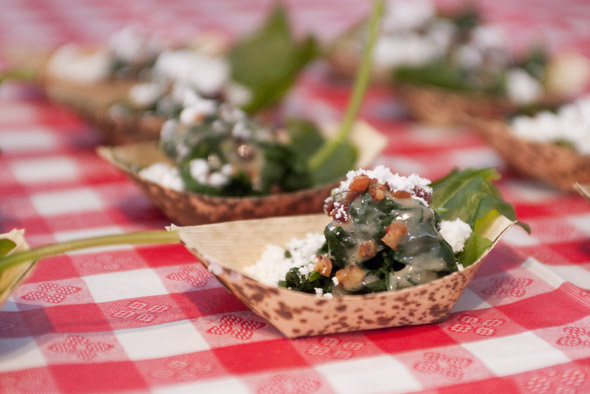 Another lovely surprise was the Spinach Gomaae from Yours Truly, a traditional Japanese snack, but garnished with bacon and bacon powder. The powder was made in house by letting tapioca maltodextrin absorb oil from the cooked bacon, and utterly tasty. Their noodle dish was also a standout, topped with pork shoulder and belly, sous-vide and chopped into cubes, and accompanied by bamboo shoots and a tart, garlic and chive ponzu. 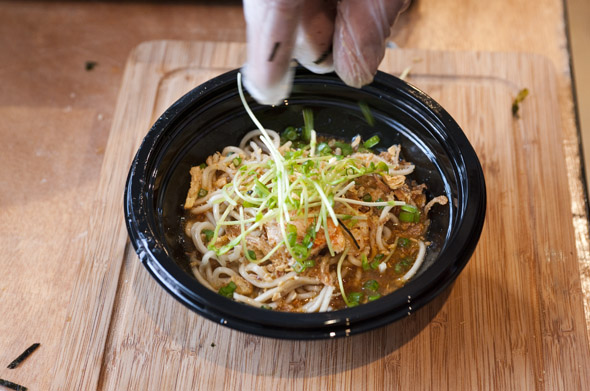 Seul Food Co. also used bacon in their fried noodles, but mixed it with kimchee. Bacon-flavoured kimchee sounded like an oxymoron, but the bacon grounded the usually light vegetable with a rich, smoky flavour that surpassed my initial reservations. The Gabardine used kimchee in their noodle dish too, providing a Mexican twist by marinating it in chili and lime. The meat in their noodles was also the most varied, combining beef tongue, tripe and pork hock. 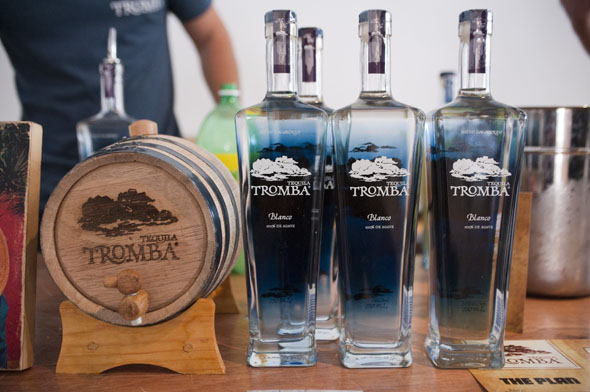 Drinks rounded out the event, with caffeine fixes provided by Grind House, tequila from Tromba, wines from Chateau de Champs, spirits from Dillon's and the debut of a pilsner called Prison Break from Double Trouble. 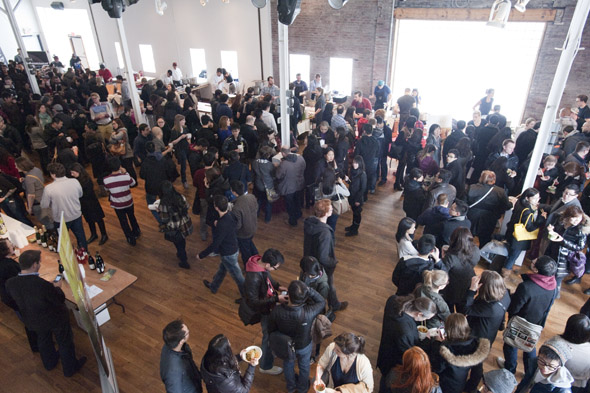 Although event organizers Frank Kocis and Suresh Doss say they won't be doing another Noodlefest anytime soon ("We don't want noodles to become derivative"), there are other events in the works ("Maybe tapas, but you didn't hear it here"). In any case, Part 2 was a success and Noodlefest concluded with a satisfying slurp.