How to make a cocktail: The Sogni d'Oro

As the restaurant scene in Toronto evolves into something worthy of international acclaim, it seems that the rate of restaurant openings increases all the time. After Vancouver izakaya Guu opened its doors in 2009, there seemed to be a surge of Vancouver Japanese restaurants from the west coast following suit (Hapa and Kingyo, to name a few). Toronto was also sought after by New York's Michelin-starred chefs: David Chang, and his former boss Daniel Boulud both opened restaurants in top hotels in the city during 2012.

With diners eagerly lining up in anticipation of their next new delicious conquest (or the opportunity to document it on Instagram), it's no surprise that the city has become quite the investment opportunity for restaurant chains and owners. 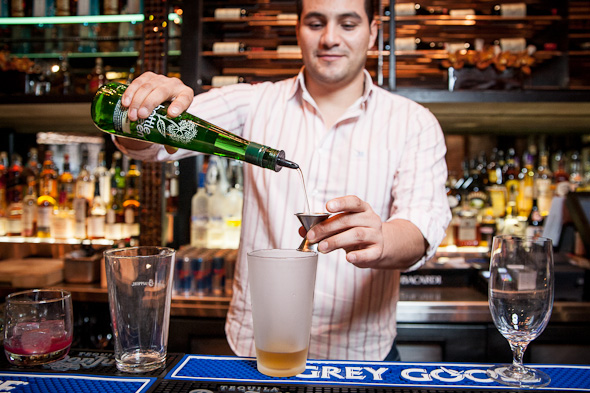 Montreal has also found its way to the city, though perhaps not with the cuisine most here would associate it with. Whilst Buonanotte enjoys a reverential status in its hometown as a go-to spot for fine Italian fare, compared to seemingly household names like Pied au Cochon, Joe Beef,Touque!, or the smoked meat mecca of Schwartz's, it seems an unlikely port.

Still, with Toronto now considered fertile ground for dining ventures, one can forgive Max Lecas and his co-owners for making the foray into Hogtown in the hope of replicating the sustained success of the original.

On my first visit to Buonanotte, it's apparent money was no object when opening, from the extensive Italian wine cellar to the high decorative ceilings. Bartender Manny Contreras is excited to show me the cocktail list, with inventions geared towards the Club District crowd. 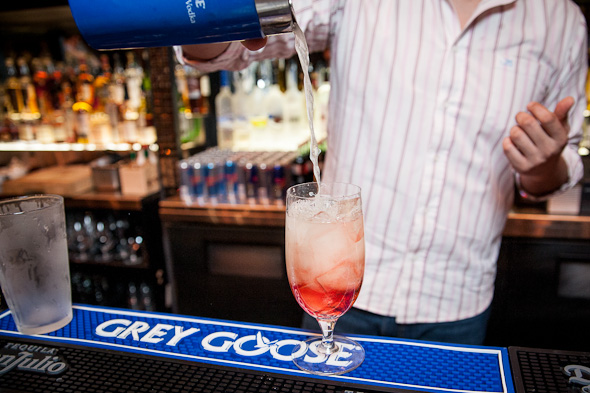 I scratch my head at some of the suggestions, an Old Fashioned with Fernet Branca and mandarin or a Grey Goose martini with edible flowers (both of which have their time and place). Today's cocktail, however, is the Sogni d'Oro ('sweet dreams' in Italian). After reading the ingredient list, I can see why: chamomile and orange infused Bombay gin, aloe vera juice, elderflower cordial and Campari.

Manny starts by filling all the ingredients except the campari into a Boston glass with ice before shaking. He then strains the mixture into an ice-filled pilsner glass. The Campari is floated over the top, along with 3 segments of orange, and finally the drink is garnished with a slice of grapefruit. The end result is a pleasingly bittersweet and refreshing drink that seems to be a good pick-me-up for those feeling the affects of a long night out. 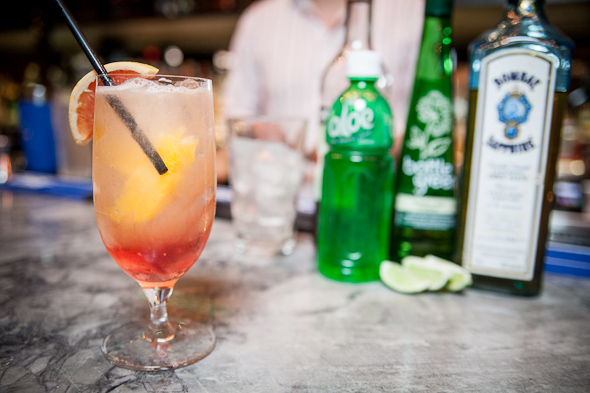 Orange blossom water and Chamomile infused Gin
Steep dried chamomile flowers in boiling water and sugar (equal parts)
Orange blossom water can be bought any most health food stores or make it yourself!
Add 2-4 bar spoons of both to a bottle of gin, keep at room temperature for 2 days and 4 in the fridge before drinking.