There are more ways to get your coffee fix than with the usual menu of lattes, espressos and cappucinos, and sometimes you want a bit of luxury with your caffeination. Black Canary on Sherbourne by King has one answer to this question, with a drink that marries coffee to what's probably one of childhood's spreadable joys.

CONCEPT
Black Canary co-owner Luthie Lampa was handed down the idea of nutella-laced coffees by the owner of Bisogno Espresso Bar, the cafe that formerly occupied the premises. The concept is simple - a dollop of Nutella dissolved in a shot of espresso and offered with either a little milk (the Nutellacino) or a lot (the Nutella latte.)

They also offer a Nutella hot chocolate for anyone who either doesn't like coffee or has become jaded with mere chocolate. 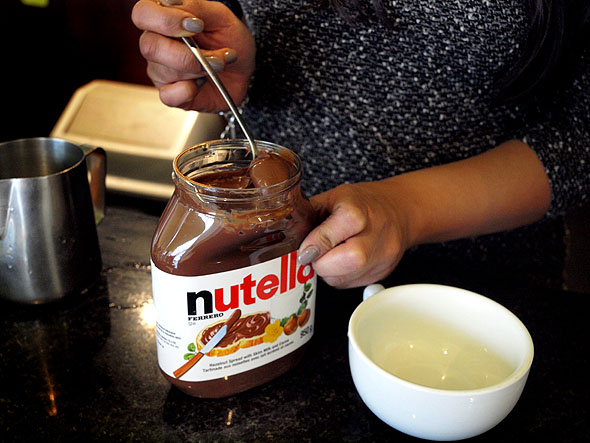 EXECUTION
Lampa explains that she can't make the Nutella latte with just any coffee bean - a light roast will be overpowered by the nutty sweetness of the Nutella and end up with a fruitier finish, so she prefers their Rufino Sure Shot dark roast.

The process is pretty basic - a cup is warmed up with hot water before a big spoonful of Nutella is added, then it's over to the espresso machine to pull a shot. A half a minute or so of gentle stirring mixes most, but not all, of the nutella into the hot espresso, after which customers are offered - and even encouraged - to revisit their younger selves and lick the spoon.

"Some people get shy with licking the spoon," Lampa tells me.

Steamed milk is poured on top and given the customary flourish of foam art, and the Nutella latte is done. 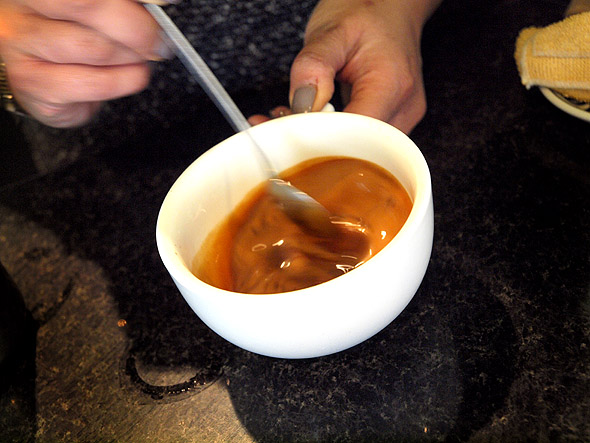 VALUE
Nutella was originally developed by the Ferrero chocolate company of Piedmont as a way of making a chocolate product when quality cocoa was scarce in postwar Italy. Hazelnuts were abundant in the region, and poor locals had used them for years to to make a little chocolate go a long way. So Black Canary's luxurious coffee drink has its origins in scarcity and poverty.

(North American Nutella is also produced at a factory in Brantford, Ontario, so you're buying local with every jar.) 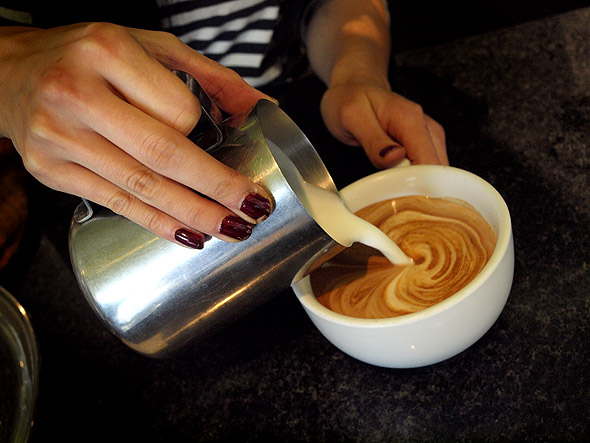 The amazing thing about Black Canary's Nutella latte is that Nutella isn't the up front taste. What you get instead is a sweet, nutty (no surprise there) latte that needs no sugar, and which ends with a smooth, pleasant chocolatey finish. It's cheap luxury, but only a real sweet tooth could probably make their way through the large size.