In search of the perfect noodle soup at SlurpTO

At SlurpTO Noodlefest, a handful of Toronto's rising top chefs came out to prepare their own personal takes on the ultimate in Asian winter comfort food, the noodle soup.

But what really set the 10 or so booths from Toronto's rising culinary community apart were the street food inspired accompaniments, which were composed of dishes were priced between four and six bucks. Having spent time teaching English in Taiwan, I've acquired a deep respect and passion for bizarre bits of easy-access food that can give you so much joy in convenient little packages.

Here are some of my highlights. 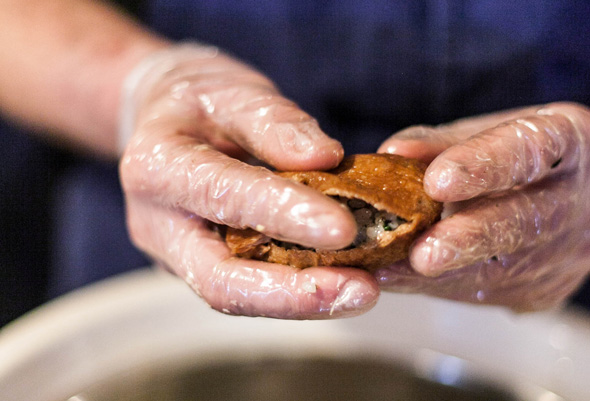 A-OK Foods (930 Queen St. W), the sister establishment to Ossington's Yours Truly offered a sweet tofu wrapped rice Inari, which were my go-to snack when I lived in Taipei. You could buy them three for a dollar at any 7-11 or Family Mart, staples in Asia. Fish has an unfortunate gag reflex on my body, but I had a nibble and was surprisingly impressed. The salted cod was incredibly subtle and the rice had a slightly eggy taste with a peppery finish. Although not a slurpable, their Salt Cod Inari Pockets were one of the hits of the show.

A-OK's Szechuan chicken and cold buckwheat soba noodles proved more of an acquired taste for the Western palate. Those not familiar with the tingly Szechuan 'ma la' peppercorns might have been in for a shocker. They to set your taste buds on fire, numb your tongue, and cause everything, including water, to taste sour until the pepper has run its course. 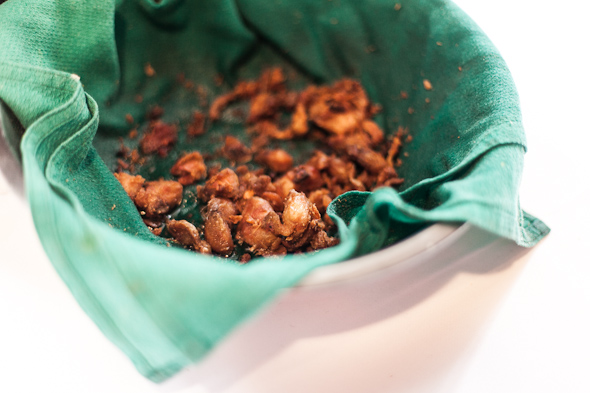 At Leslieville's Skin + Bones Wine Bar (980 Queen St. E) booth, we feasted on an unlikely Taiwanese snack that I was used to seeing awkwardly translated into English as 'chicken butts' but what Chef Matthew Sullivan preferred to call by its more noble name, chicken tails. Basically deep fried, to the point of rendering the chicken fat, slathered in a green onions and oyster sauce mixture, they burst in our mouths like chewy chicken soup pillows. Forget about bacon or guanciale, this is the new decadence. Also notably decadent was the square of cold pressed egg yolk, that accompanied their warm soba noodles. If you didn't know any better, you'd think it was processed cheese. 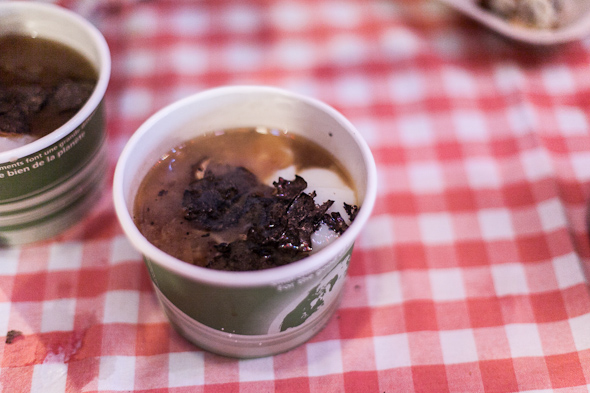 Which leads us Splendido and The County General's combined table where they were serving up mini pork belly Big macs with good old Kraft singles slices. I've never been much of a fan of the Mickey Dee's staple, but after one of these guys, Big Macs have been ruined forever. It was like eating the most incredibly moist and supple pat of butter, lost in a creamy Thousand Island tsunami.

Splendido's (88 Harbord St.) opulent style of dining could never allow room on the menu for ramen, but if they did, they might taste a little like the creamy porcini-brothed, whole truffles shaved into bowls of joy garlicky joy that were presenting with slow cooked eggs that poach literally in their shells. 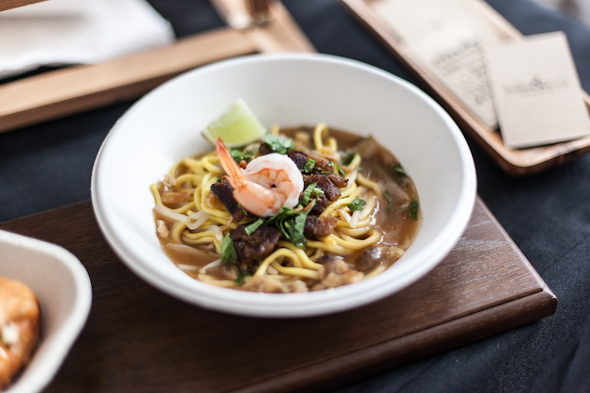 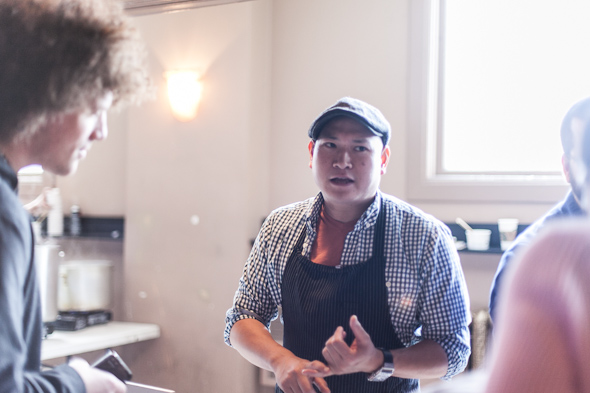 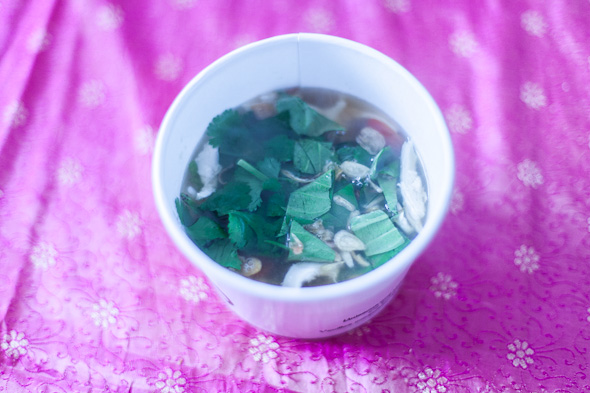 Matching in sweetness was the St. Catherine's food truck, El Gastronomo Vagabundo's Thai Tom Yum soup with a duck broth and cherry tomatoes, perfectly balanced in the elements of spicy, salty and sour, and one of the liveliest broths of the show. 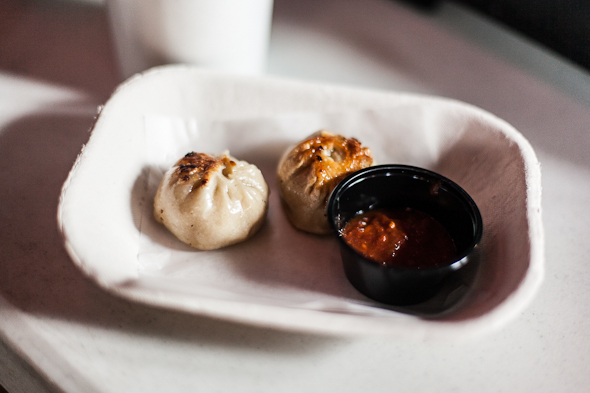 Hawthorne Food & Drink (60 Richmond St. E.) served a slow cooked duck confit pho but what really had my eyes popping were their pork and chickpea momos created by visiting Tibetan-Indian chef Tashi, who had cooked for the Dalai Lama on multiple occasions. The chickpeas had been slow cooked to the point where it matched the pork's chewiness in a textural sweet spot and were served with a spicy tomato chutney. 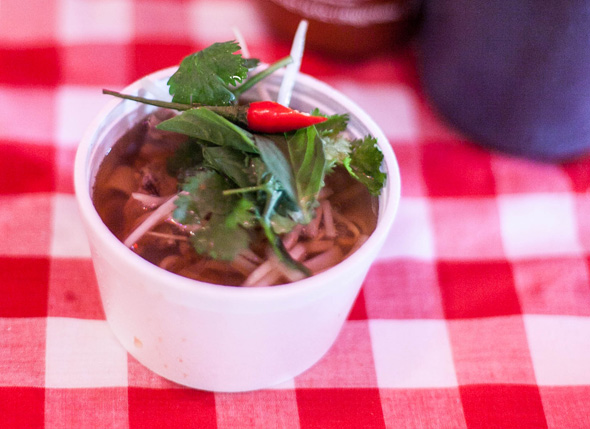 Their neighbors just up the street, Richmond Station (1 Richmond St. W.), run by Chef Carl Heinrich winner of Canada's Top Chef Season 2 delighted crowds with his mother-in-law's Vietnamese jungle pho recipe. What better way to honour his family than serving it with on the spot snipped up bird eye chilies and tender beef flank. The freshly cut oils diffused immediately into the guinea hen broth -- I think I might bring my own pair of scissors next time I hit up my local pho joint. 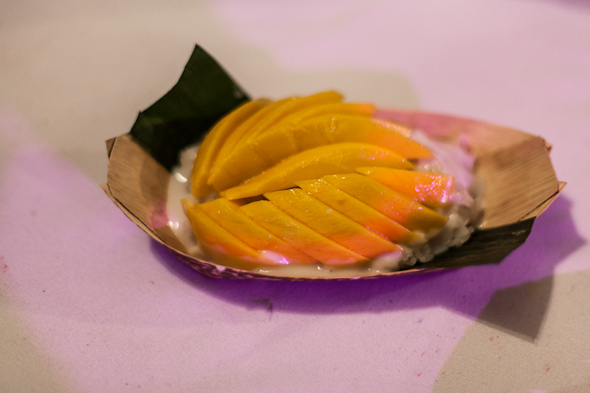 After all this, was there room for dessert? While Sabai Sabai were sold clear out of their famous veal medallion Tom Yum soup, however there was still plenty of mango coconut sticky rice available. A staple in Thai street food, the slightly savoury coconut milk creates a delicate contrast with the sweet rice and mango, leaving taste buds lusting for more.

By the end of the day, everywhere I looked, chefs were swapping dishes, and I can only imagine the level of scrutiny they were experiencing as the young masters decoded each other's recipes. Apparently over 100 restaurants applied and many that were approved were left on curator Suresh Doss's (of foody haven Spotlight Toronto) waiting list, so in case you missed out on the sold out event, there's always the possibility of a sequel.