How to make a cocktail: The Bennet-Bellows Sour

This week's travels take us to classically styled French Bistro La Societe at Bloor and Avenue, where we have not one but two cocktails to discuss!

The Bennet-Bellows Sour
The origins of the style of cocktail known as a 'sour' are said to be traced back to the British navy: soldiers were given lime juice to prevent scurvy, which they would then add to their daily ration of gin or rum to make it more palatable. Fast forward a few hundred years, and a sour is generally regarded as a mixture of liquor, citrus (commonly lemon) and sugar, with many bartenders opting to add egg whites. Drunk as an aperitif, a good sour should be fresh and bright, to awaken the palate for the meal to come.

Having a balance between alcohol and fruit juice is key, as they should enhance the flavour of one another. The Bennet-Bellows sour is a perfect example. An egg white, Makers Mark bourbon, cardamom-vanilla syrup, and fresh-squeezed lemon juice are dry shaken before ice is added for a second shake and strained into a chilled coupe glass. As a final touch, a float of Averna (an Italian liqueur, usually drunk as a digestivo) is added. 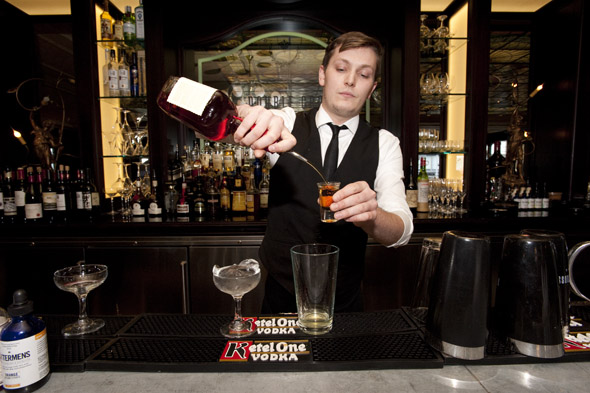 1 Egg white
2oz Maker's Mark Bourbon
Â¼ of a lemon
Â¾oz Cardamom-Vanilla Syrup
Dry shake all ingredients for 20 seconds. Re-shake again with ice. Fine strain into cocktail glass. Float Averna by drizzling over the back of a bar spoon. 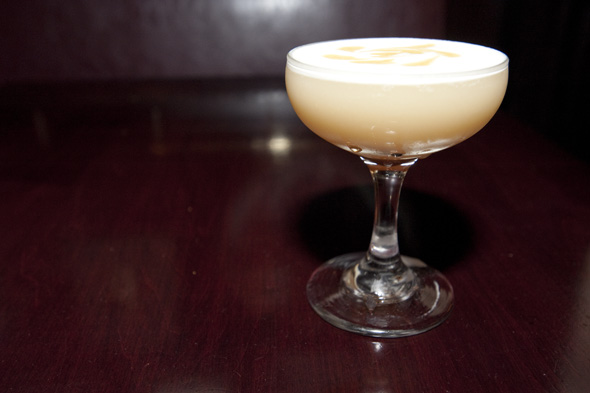 Name this cocktail for a chance to enjoy one on the house at La Societe.

The green bottle, tucked mysteriously away on a back shelf, will be a familiar sight to many bar patrons the world over, but few are as familiar with the complex and distinctive flavours of Chartreuse. Its popularity in cocktail making has risen of late Toronto with the return to popularity of the Last Word (a prohibition-era mixture of gin, maraschino liqueur, green Chartreuse, and lime juice), but it remains a great challenge for any bartender learning their craft to successfully balance the intense herbal flavours in a mixed drink. 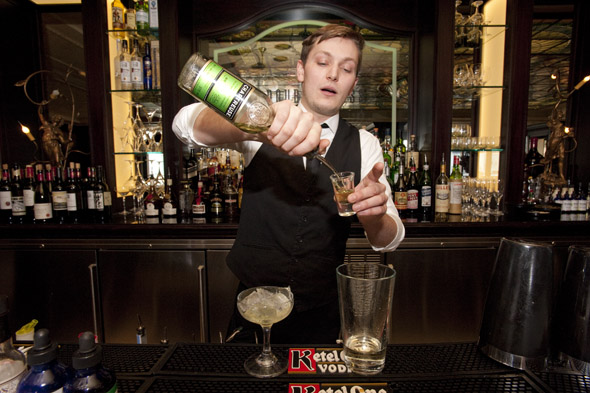 James LeBerg was asked to make a cocktail containing Chartreuse on the fly by famed Master Sommelier John Szabo. James loved the drink he came up with (a herbal take on the classic Corpse Reviver No. 2), and it'll be featured on the new cocktail list launching soon at La Societe.

He starts by filling a coupe glass with ice and a touch of Herbsaint Absinthe. While the glass chills, he adds Victoria gin, Lillet Blanc, green chartreuse and a quarter lemon (squeezed) to a Boston shaker before ice is added, and everything is stirred. The ice is tossed out of the coupe to make room for the drink to be strained into (though the flavour of the absinthe remains), and finally the drink is garnished with a lemon twist. The result is a beautifully balanced cocktail.

Unfortunately, he can't think of a name for it, and is inviting readers to suggest something. Leave your idea in the comments section. The winner, picked by James, will have his or her suggestion immortalized in print on the new cocktail menu at La Societe, and also get to enjoy one on the house as a thank-you. 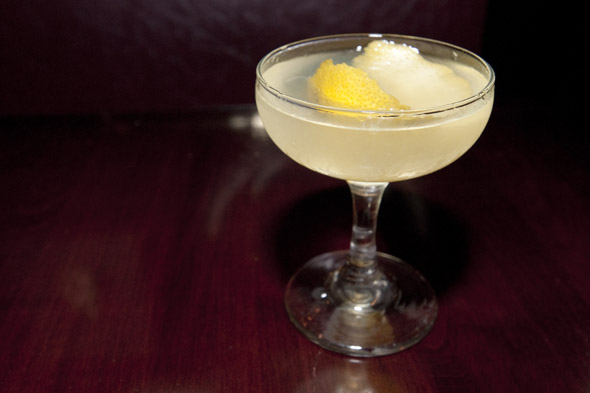 Stir, and strain into glass (toss out the ice first!). Garnish with lemon twist.