The idea of a new brewery that's advertising home-brewed beers at its launch doesn't really seem all that inviting. Typically, new breweries will present the credentials of their award-winning, well-schooled brewmaster--the impeccable standards of the region in which he or she studied the craft, and the breweries in which he or she has been employed previously.

So it was not without some trepidation that I attended a tasting session last week for newly-launched Liberty Village Brewing Company, which trumpeted the beers of brewmaster Eric Emery--a man whose sole official beer brewing credit was "3rd place finisher in the IPA category of the 2011 Toronto Beer Week Homebrewing contest."

But then, after I met the company's founders--Cassandra Campbell, Steve Combes, Kosta Viglatzis, and Emery himself--some of their clear enthusiasm for their company couldn't help but rub off on me.

Plus, I must admit, there is some beer-nerd appeal to the idea of a savant whose homebrew is so good that others would want to launch a brewery around it--which may well be the case. I spoke to Emery about his introduction to homebrewing in Toronto and he confessed that, having moved here from BC and finding the craft beer scene lacking, he had a panic attack and thought, "Oh my god. What am I going to do?" And so he started brewing beer. When he wanted a new style of beer he couldn't find here, he'd make one. 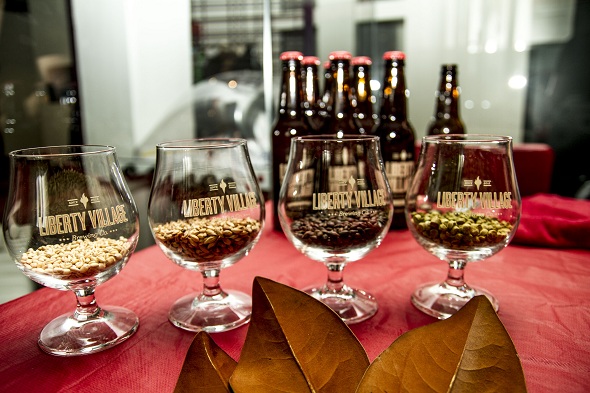 But the cynic in me was still willing to brush that off as deft marketing--it's certainly an interesting narrative for the company's origins. How, I wondered, did the beer actually taste?

As it turns out, pretty damn good.

The first beer we tried at the tasting session, held Tuesday night in the Liberty Market Building, was their "Penitent Pale Ale"--a beer which assured me that yes, Liberty Village Brewing Company was indeed the real deal. In fact, for my money, this beer would rank as highly as any other pale ale currently on the market in Ontario. It had citrusy, grapefruit notes and was assertive and hop-forward. Basically, it was a great example of the exact style of beer that's currently doing extremely well in beer bars and LCBOs across the city and the province. But at 6%, it would also be a little easier drinking than some of the higher alcohol offerings currently on the market.

In addition to the more superficial appeal of their event--flashy glassware, thoughtful food pairings, a space donated by Lifetime Developments, and a collection of Liberty Village's young, good-looking, professional demographic--after one drink, it was clear LVBC had done their beer homework.

And it's also clear they plan on doing some more homework before they make any big moves. Their tasting event Tuesday was all part of a larger plan to gauge public interest before they officially launch their company. This public tasting was the first of a handful of planned outings at which they'll actively solicit public input on their brews, with an eye to narrowing the field to one or two to brew on a larger scale once they decide on a place to contract brew their products. Eventually, once they've introduced their product to Liberty Village's restaurants and bars, they're aiming for broader expansion, an LCBO release and, ultimately, an actual space in Liberty Village where they can brew their beer, offer tastings, and let people walk out with a case of their product. 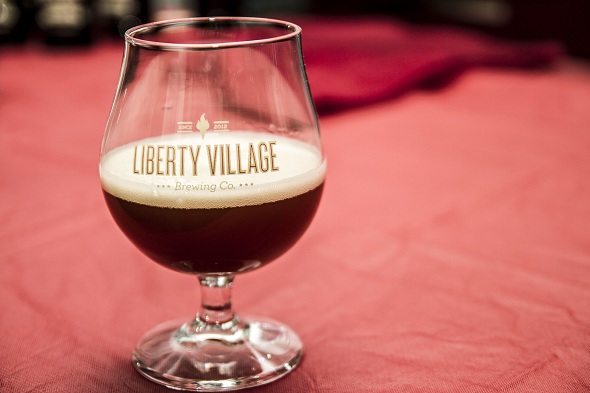 In addition to their pale ale, on Tuesday they presented a dry-hopped IPA with slightly more bitterness and piney notes; a fantastic robust porter with nutty, chocolatey characteristics; and, the surprise of the evening, an imperial amber ale. In my opinion, any of these beers would fare well if they were kegged and sold tomorrow (which is saying a great deal for a brewery's first public outing), but the imperial amber ale was clearly the hit of the party. This subtly spicy, malty anomaly with caramel biscuit notes and a slightly bitter finish had the distinction of being unlike much else that's currently on the Ontario market, but also proved to have enough mainstream appeal to please the frat-boy sect--some of whom were certainly in attendance Tuesday and one of whom I actually overheard say, "I usually drink lagers, but I would drink this amber. Fully."

If you want to participate in future tastings, you can get on LVBC's mailing list and help them shape the beers they'll eventually present to the public. While it seems a dubious feat to attempt to launch a brewery with beer brewed on home stovetops and cooled in bathtubs, if what I sampled Tuesday is indicative of the product to come, here's hoping they pull it off.