The backdrop in the Senses Restaurant dining room was fitting for the occasion. With bottles of Chinese oyster sauce racked up behind a large pane of glass and a playful arrangement of chopsticks and takeout boxes spread across the table, the GwaiLo Pop-Up gestured to the flavour for the evening before we had even tasted the food. 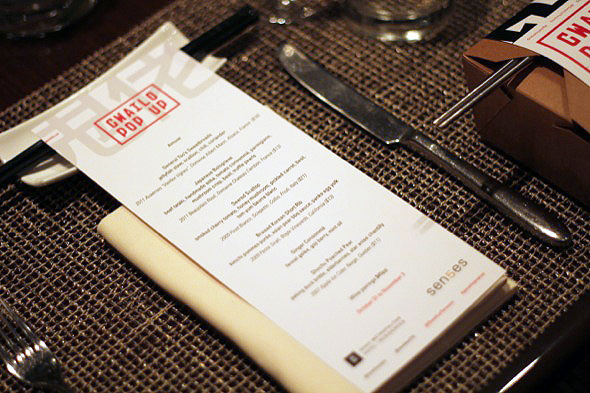 The new collaboration between acclaimed Toronto chef Nick Liu (Niagara Street Cafe) and cocktail maven Christina Kuypers (Splendido), takes temporary residence at Senses Restaurant in the SoHo Metropolitan Hotel from November 1- November 24, 2012 (Thursdays-Sundays). Reservations are are mandatory and can only be made online by visiting their website. 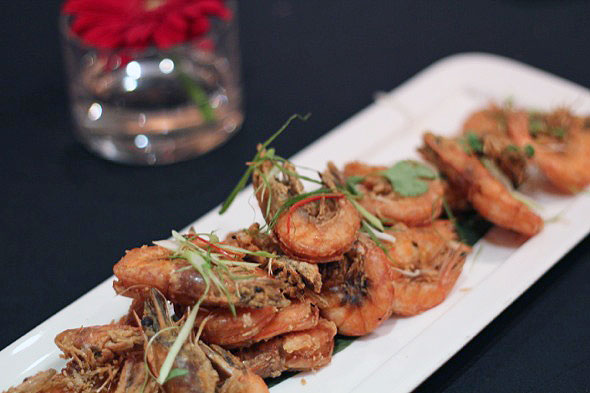 Set to change each week, Chef Liu crafts the menu based on inspiration from his travels abroad and the influence of his Asian heritage. The name GwaiLo itself — a disparaging term for foreigners (literally: "foreign devil") popularized in Southern China during the Opium Wars — is a humorous reference to both Liu and Kuypers' mixed backgrounds. 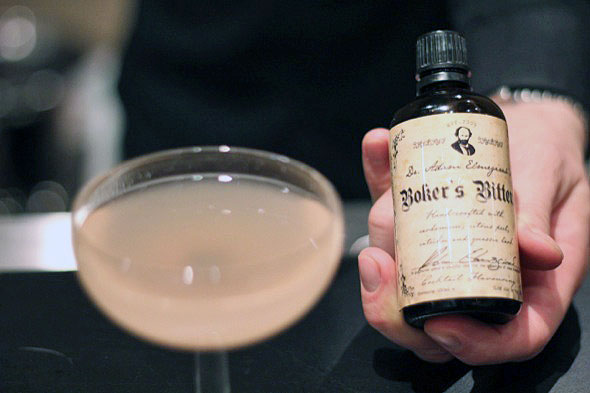 Of course, a night of feasting would not be complete without the presence of a few good cocktails. Kuypers flaunted her creative flair as she schmoozed the room and explained the various drinks that will be featured on the menu throughout the duration of the pop-up (are you tired of that term yet?). The Gov. Dawson ($13) is a fresh, peppery mixture of Hendrick's gin, green chartreuse, ginger, jalapeno and cucumber. For a unique play on a Sidecar, the Scooter ($12) is a delightfully palatable brandy beverage made with pisco, maraschino, guava, lemon juice, Boker's Bitters, lemon and cherry.

As an inventive addendum to the temporary restaurant, Kuypers will be hosting a free Sunday School up until December 9, focused on cocktail seminars for service industry professionals, as well as general fans of alcohol. 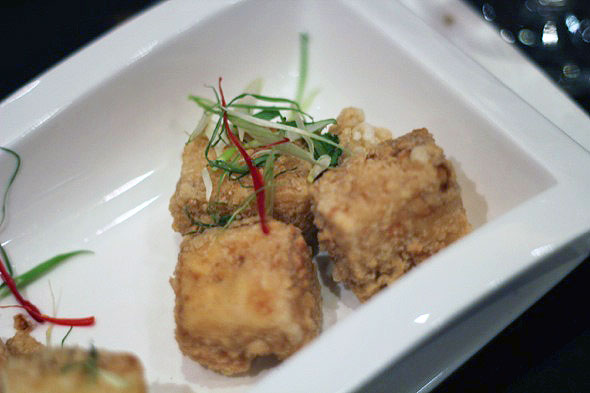 It's a good thing that they pulled us down to the main dining area, or I would have destroyed my appetite on the appetizers alone. The crispy fried tofu was smooth as silk on the inside with a salty, chip-like crust. We also indulged in deep-fried shrimp, whose heads I wish would replace popcorn at the movie theatre.

The conventional GwaiLo Pop-Up experience (if I can call it that) would technically begin now. Each diner receives an artfully prepared amuse bouche, followed by a four course series of small plates, a palate cleanser and then dessert, all for $75. Full wine pairings are also available for an additional $45 per person. 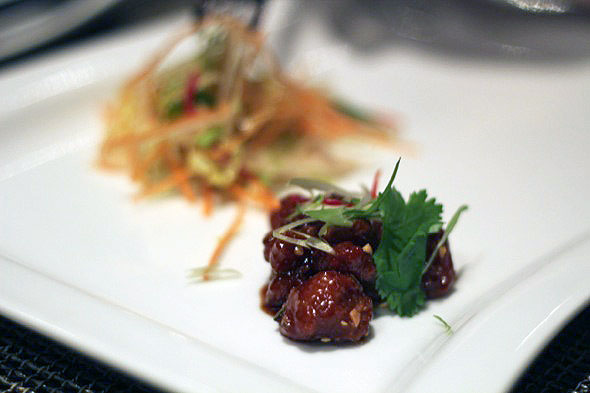 The night's amuse was a fried kimchi lettuce wrap — a crisp and fresh little bite of love. The first course — General Tso's Sweetbreads — jumped out at me from the page of the menu and seemed to be a logical start to a fusion meal. The sauce was sweet and clung perfectly to the battered exterior of the sweetbreads, which were buttery on the inside. Unfortunately, the accompanied jellyfish slaw left a little to be desired and could have benefited from a bit more acidity. 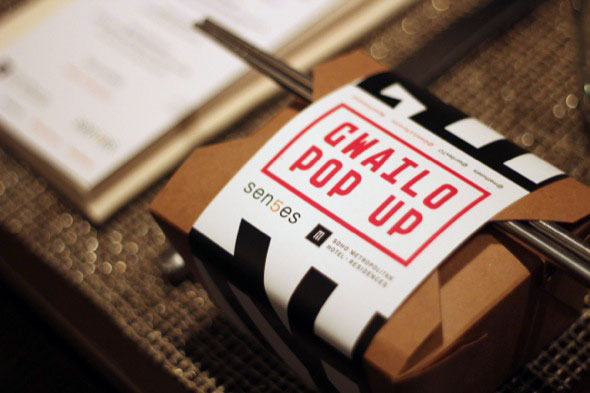 Our next course was also a mix of the exceptional and the slightly underwhelming: Japanese Bolognese, composed of pristinely cooked beef tataki, handmade soba noodles that missed the mark texturally, a tomato consommÃ©, parmigiano-reggiano, mushroom crisp, basil, and truffle pearls. Despite the battle between the beef and buckwheat noodles, the light, airy, mushroom crisp and delicate truffle pearls made this dish something I'd still order again in a heartbeat. 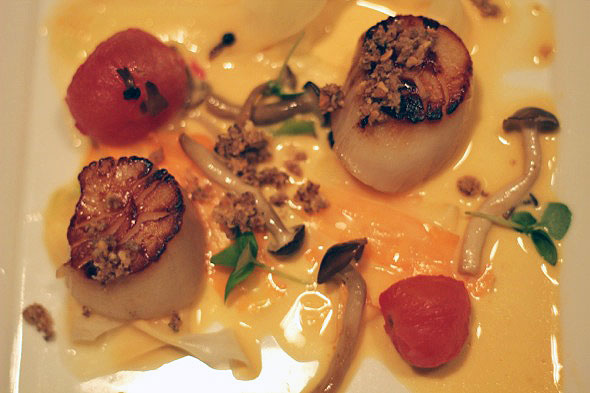 With our tastebuds, stomachs and livers nicely warmed up, we moved on to a dish of seared scallops. Perhaps the most picturesque of the evening — though none of the night's offerings lacked in elegant presentation — the soft scallops were scattered about the plate with an arrangement of seriously smokey, hand-picked cherry tomatoes direct from Liu's garden, honey mushrooms, pickled carrot, basil and a sauce of tom yum beurre blanc. The scallops and mushrooms stood out amongst the blander flavours of the carrots and the sauce. 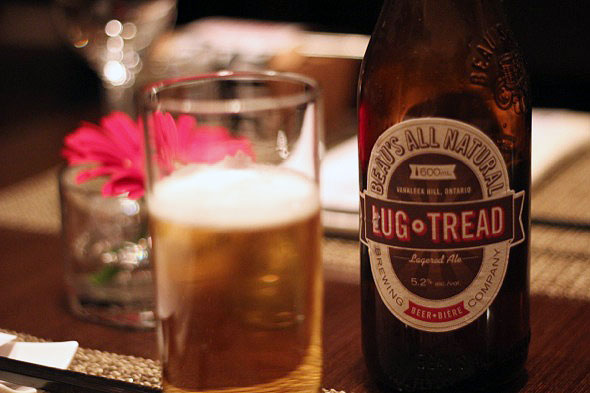 With the final main course approaching I was comfortable in the warmly styled dining room, but had yet to be completely knocked out by a dish. To say that I'm not much of a dessert fiend would be an understatement, so I was hoping that Liu's braised Korean short rib would floor me. 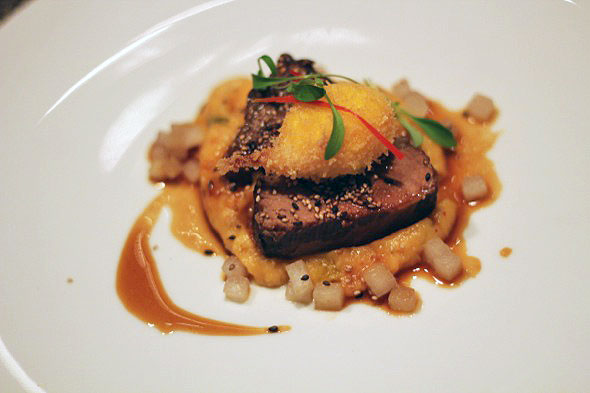 It did. Resting atop a velvety bed of kimchi pommes purÃ©e and drizzled with a sweet asian pear BBQ sauce sat a short rib so soft that you could effortlessly cut it with a fork. Crunchy, tart bits of what I assumed to be kimchi daikon served as an excellent contrast to the succulent meat. But the real one-two punch was delivered by a deep fried panko egg yolk — this is the stuff of dreams. One slice through the centre of that expertly cooked, gooey yellow yolk and the damn thing just spread its love all over an already incredible mix of flavours. For the sake of all future patrons at the GwaiLo Pop-Up, I hope this dish stays on the menu. 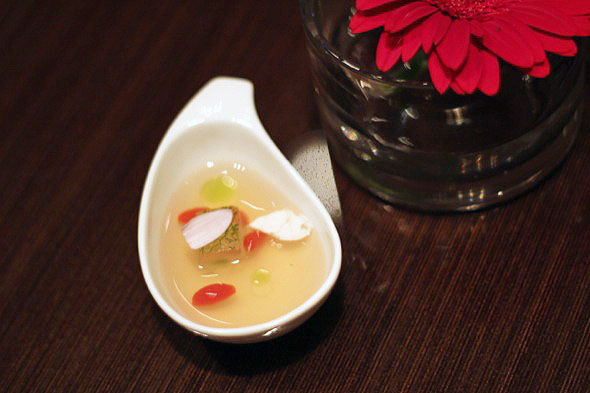 Whatever was to follow that freakishly good finale seemed insignificant at this point, but our palates were thoroughly cleansed with the powerful, herbed punch of a ginger consommÃ© with fennel gelÃ©e, goji berry and mint oil. 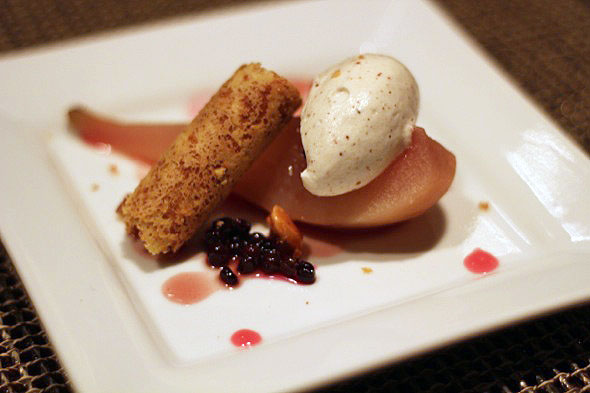 The dessert course was a pretty assembly — sochu poached pear with peking duck brittle, elderberries and star anise chantilly. I'm not a big fan of licorice so I found the chantilly overpowering, but the pear was nicely cooked, and the fact that Liu successfully incorporated duck into a dessert made this meat lover beam. 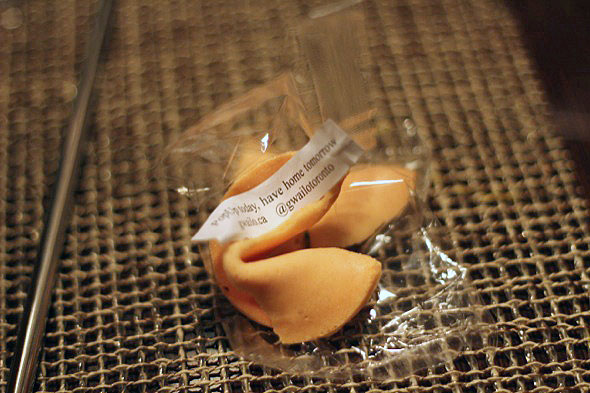 Chef Liu says that "the concept of GwaiLo Pop-Up was designed to bring our food and dining philosophy to a larger audience while we work to establish a permanent home for our restaurant." For those of us that are intrigued enough to attend, it offers us a fun and flavourful glimpse into the minds and palates of a great hometown chef and an inspiring liquor-expert.