The Feasting Room wants you to get to know an animal

Often when we think about ethical eating, it lies somewhere in the spectrum of vegetarianism. We think about all the things we should be eating, like quinoa and almond milk. Rarely, do we think "conscious" and visualize eating a deer. The Feasting Room changes our preconceptions of eating, and does so in such an elegant way, you will wonder why we don't use more parts of an animal.

On the night we went to the Feasting Room, situated right in the Orbit Room and happily quiet at 7pm, we were ready to enjoy one of the last seven weeks of this pop-up restaurant. This is a six course extravaganza that cannot be rushed, and hence your reservation will not be later than 8pm. A couple who tried to come in for bar snacks were politely ushered to another restaurant.

As we were interested in exploring red meat, we decided to try "venison week." Mathieu Dutan, General Manager and self-proclaimed "wine dude" talked us through the process. Our menu was wrapped in brown paper, like a hunk of meat at a butcher's shop. It contained a picture of a deer. Each course was numbered with the part of the animal we were going to eat. I struggled to hold back from asking for crayons.

Before the six courses began, we had two snacks. Noah Goldberg, the chef and owner, butchers the meat himself on the premises to waste as little of the animal as possible. We began with dehydrated venison jerky, which gave our teeth a bit of a workout. The soy sauce and hoisin it was marinated in was suburb. We decided to splurge on the $35 per person wine tasting menu, in which every wine was brought out by Mathieu with each course. Either we got drunker, or the amazing wines got even better, course by course. 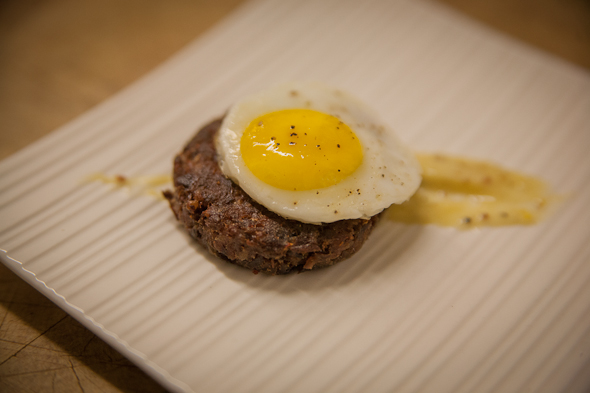 Snack two was venison scotch quail eggs with truffled aioli. When the very cultured Mathieu and Noah weren't looking, we may have licked the aioli from the plate. And this wasn't even our official eating time - this was the warm up. 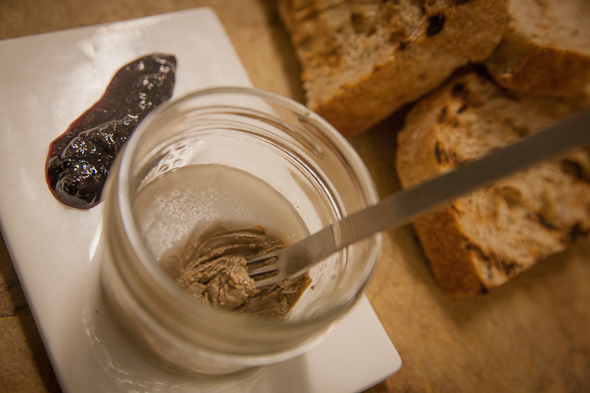 Course one, according to our diagram, would involve liver. We were presented with venison liver pate in a mason jar with a sprinkling of sea salt and homemade blueberry compote. We hesitantly placed the pate on big hunks of toasted bread. The second piece was a different story, the sweet and subtle venison pate being fought over with tiny pate forks. 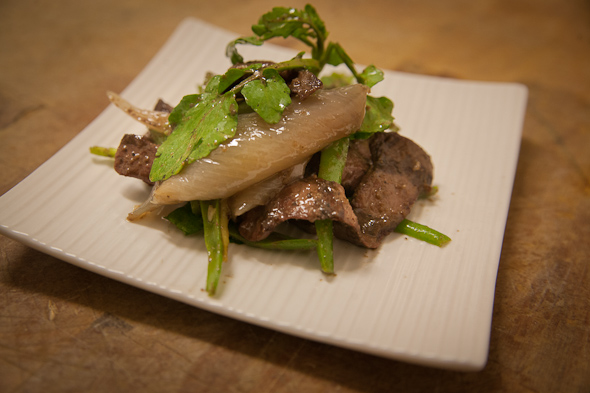 We were a little frightened about the second course, but life is about trying new things, and with Noah and Mathieu's international experiences, we were in good hands. Heart salad was presented with pickled walnut vinaigrette. The heart was so thinly sliced, I would dare anyone not to think it was the best steak salad of their lives.

The remaining parts were traditionally eaten from other animals, like the ribs, served with brussel sprouts and bacon infused cornbread. To anyone who complains of game meat always tasting "tough" this was an example of the opposite. So tender, so sweet, and we were only half-way through. I joked with Mathieu that we could take it; trying to man up in my stilettos. 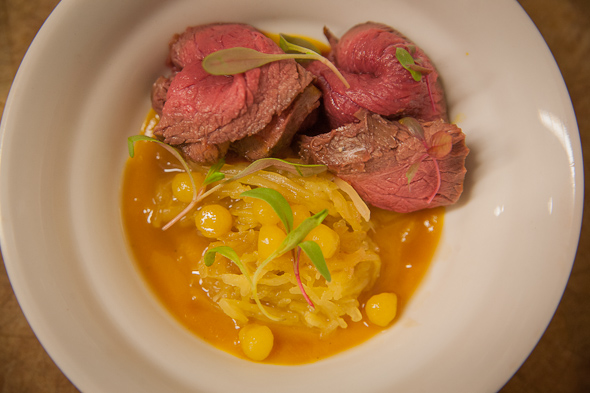 Fourth course: leg of venison with seasonal squash: spaghetti and butternut. Microgreens, juniper sauce and more incredible wine that we couldn't pronounce. When we bathed the two men in compliments they would humbly speak about the next course to come. Each portion was small and appropriately spaced. We had time to digest, to talk, and to enjoy. 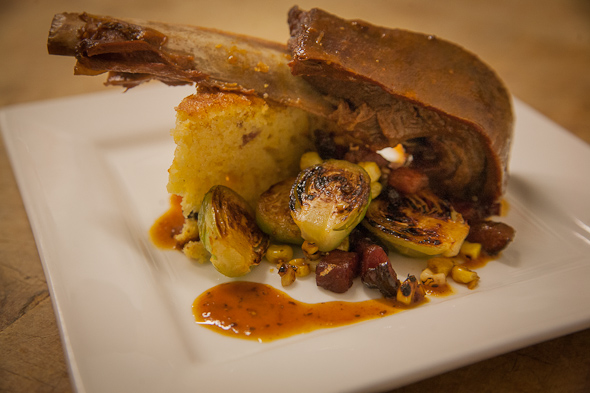 Fifth course was a puff pastry, venison pot pie with button mushrooms and red onions in a thick sauce. Without the bottom crust, it didn't feel too heavy, but it was easily the highlight of the night. Noah's cooking confidence shined in his food, showing his ability to transform any ingredient into someone's new favorite meal. 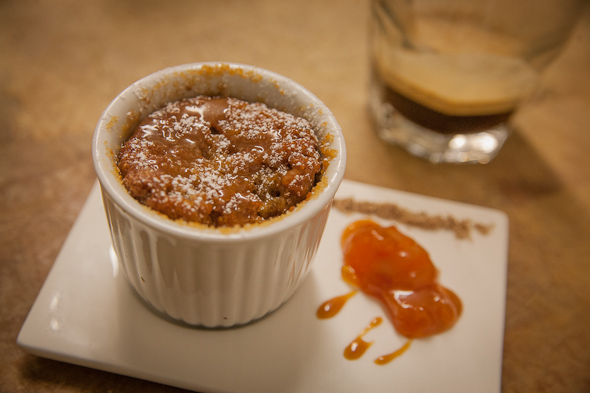 But a venison dessert - is it possible? Surprisingly, yes. Mincemeat and spice cake with a cheeky reference to the "meat" part. Like a beautiful warm Christmas cake, it was sopped up with a dessert wine that was slightly dry.

Easily, easily, one of the best meals of my entire life. There are seven weeks left, each week a different animal, and then afterwards the plan is for Noah and Mathieu to open their own place. This will be a popular restaurant, if anything is right in the world.