It won't have Hot Box's famous "Freakin' French Toast" or "Chronic Quesadillas," but the new Hot Box Lounge will be a spot for regulars to convene after the Cafe's closure.

Hot Box Cafe â one of Toronto's most beloved pot-positive spots â will shut down its 11-year operation this coming weekend. The BYOP cafe (Bring Your Own Pot; that is, "no dealing, fishing, mooching or asking") is losing its home to Jimmy's Coffee, which purchased the building at 191 Baldwin from its current owner.

"Actually, I heard about it from you guys," owner Abi Roach tells me as she prepares to close up the business. Despite their long relationship, Abi says her landlord didn't tell her about the sale. "It doesn't matter at this point, though," she says. "Essentially, we're just going to move; no point in fighting rich people."

Hot Box is going to move in back of Roach-O-Rama at 204 Augusta and operate pretty much as a vapour lounge. Though the space is currently being renovated to include bathrooms, Abi hopes it will be open by the end of next week.

"We're probably going to keep it as a lounge for a year or two," Abi says. "After that, we'll see what happens." She adds that the lounge will likely offer small snacks and munchies, but not full meals. Someone has also offered Abi a pool table, and she says that if she finds the space, she'll fit it in the lounge as well. 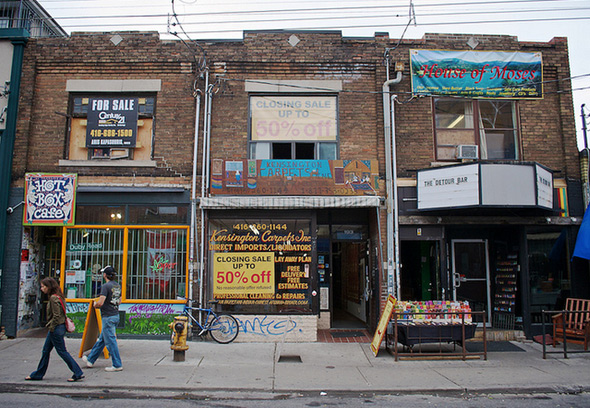 As for the Cafe, Hot Box is in full liquidation mode. Friday will be "All-You-Can-Eat" for $10 all day ("Stoners will have no problem with that," Abi quips), as the kitchen tries to make use of most of its remaining food. After a final "goodbye" party on Saturday and TBD for Sunday, Hot Box Cafe will host an equipment sale Monday, clearing out the rest of its kitchen. Then it's onto the Roach.

I ask Abi how regulars have responded to news of the closure/move. "There's more excitement than sadness," she says. "And we're excited, so that helps. It'll still be the same place in essence."