Where to get cask-conditioned ale in Toronto

"Cask-conditioned ale" is probably a phrase you've heard from time to time if you drink with any sort of regularity in Toronto's more beer-inclined bars, and its popularity continues to grow as the city's beer-drinking options diversify — but unless you're really into beer yourself, you probably aren't really sure what cask ale is all about.

Essentially, cask-conditioned ale is unfiltered and unpasteurized beer that is, as the name might imply, conditioned in the cask from which it will eventually be served. The method of brewing cask ale begins the same as any other beer, but breaks of in its own direction following primary fermentation, at which point the beer is siphoned into casks via a process called "racking."

Once the beer is in casks, it matures via secondary fermentation aided by the residual yeast that remains in the beer, allowing it to develop a subtle carbonation while the beer's ingredients foster more complex flavours and aromas. Perhaps the most interesting thing about cask-conditioned ale is that, because this yeast is still present in the cask when the beer is served, it continues to mature. It's literally still alive and changing up until the very moment it hits your lips. 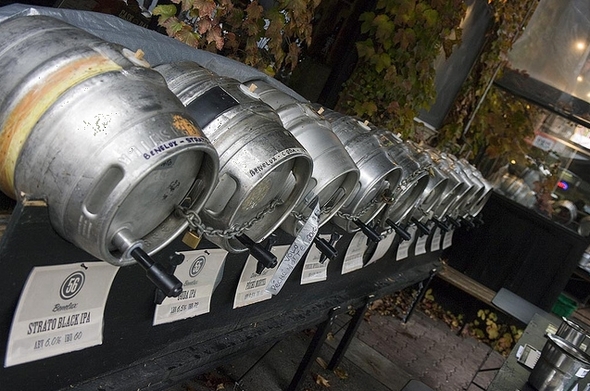 While this all may seem somewhat technical, it's actually a process that cask ale proponents argue allows beer to be enjoyed on a more basic level: unaided by pasteurization, the addition of carbonation or adjuncts, and kept out of extreme temperatures, cask-conditioned ale is, so the story goes, beer in its "natural state."

Aided by the recent mini-boom in local breweries here, cask-conditioned ale has seen a considerable rise in popularity in Toronto in recent years. Virtually all of Toronto's local brewers brew cask ale from time to time and so too do Toronto's better beer bars — from barVolo to The Only Cafe, Grapefruit Moon, Brydens and more — frequently feature cask ales on tap. Since 2009 Great Lakes Brewery's "CASKapalooza" has been a popular feature at Toronto's Festival of Beer, and, perhaps most responsible for the leading the charge in championing cask ale, the Morano family, those beer-enthused folks behind Volo and Keep6Imports, are set to host the eighth annual "Cask Days" event, a multi-day tribute to cask ales that last year featured beer from over 50 different microbrews across Canada.

Toronto beer fans' love of cask ale has even spawned CASK!, a group of people dedicated to "raising awareness of local cask conditioned ale in Toronto."

Regardless of whether or not you buy into the idea that this is a more "pure" form of beer, there are certainly some irrefutable merits to cask ale. Most notably, if you're drinking cask ale, it's a near guarantee that the product you're drinking is local and that it is fresh. Given the short lifespan of cask ale, you'll never drink any that has sat on a shelf for a long time or that has traveled too far from the place it was made.

From being brewed by local brewers with natural ingredients, aged in an often unique choice of casks (bourbon barrels, wine barrels), and delivered via hand pump or, more often, poured using gravity, cask ale is simply more thought-provoking than your average pint. And since you're often drinking it at an event that's championing cask ale, you can frequently talk directly to the person who made it, which is a lot more than can be said for your average glass of Stella Artois, for example.

To find local bars that have recently tapped cask offerings, you needn't look any further than the twitter hashtag #OnCask, an increasingly popular way for local bars, brewers, and drinkers to share what's currently on cask in Toronto. You can also check out the handy map put of establishments serving cask-conditioned ale put together by the Ontario Cask Ale Trail.

Second image by Stephen Gardiner from the blogTO flickr pool.