The Annex's Farmers' Market at Bloor and Borden

The Bloor/Borden farmers' market, located in the parking lot at Bloor and Lippincott is going full force every Wednesday from 3pm-7pm. Running since 2008, this market opened June 3rd and will continue every week until October 28th. Part of MyMarket, this farmers' market, though small, boasts only vendors who have produced all the goods they are selling themselves. 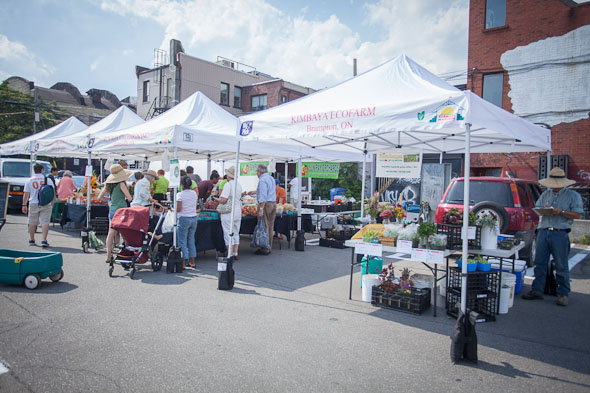 There are only five markets that have been certified, and the process is a tad controversial as it means the markets involved have much less variation in products offered. Bloor/Borden hosts about a dozen farmers every week, give or take a couple, offering plenty of seasonal produce, honey, fresh-cut flowers, jams, and pies. The market boasts local musicians and a children's activity tent for those who need more than a bunch of giant beets to keep them entertained.

Here are some of my favourite vendors at this market. 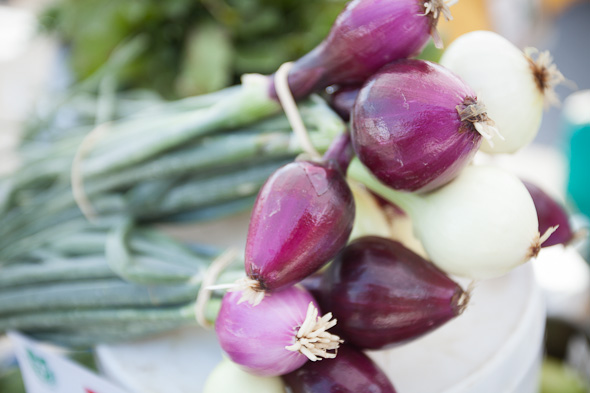 Collins Farm Produce
A true family business, Collins Farm Produce has five generations of Collinses behind it. They have relocated their farm multiple times and only began growing at their new location in Hamilton in 2006. They occupy the most space at the market compared to the other vendors, selling all colours of beets, many varieties of kale, and plenty of herbs. Plus, they offer tasty samples of their wares.

Common Ground Co-operative (CGC) / Lemon and All-Spice Cookery
One of the other things that sets MyMarket farmers' markets apart is their commitment to community development. The CGC is a non-profit organization that helps adults with developmental disabilities by offering them operational services as well as educational training. Their stall at the market boasts a variety of baked goods. 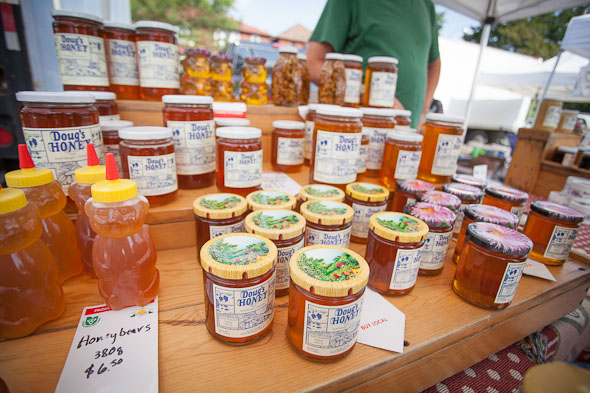 Doug's Honey
Doug Eiche's honey is unique, as the hives are located near flowers and specially chosen trees. With several different varieties of honey, and several different honey-based products, there is something for everyone. Doug suggested pairing honey with things that may seem unusual, like cheese and oranges, but of course a drizzle of the good stuff (perhaps wildflower) is always perfect to sweeten a cup of tea.

Godelie Family Farm
This farm attracts customers with its bushels of yellow and green zucchini that come in all shapes and sizes as well as piles of freshly picked corn. The farm, located in Otterville, was originally used for growing tobacco, but has been put to better use by the Godelie family who've been farming there since 1979. 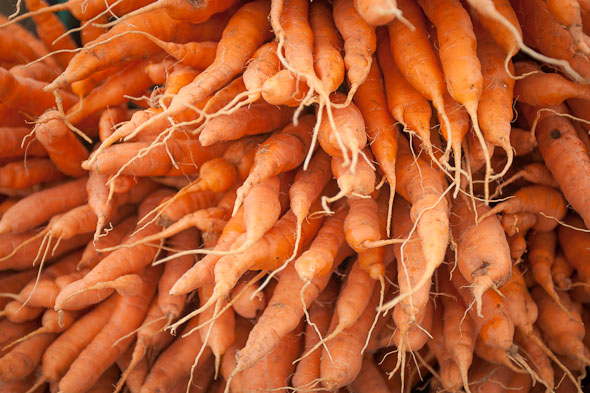 VanHart Greenhouses - All Organic
Around since 1975, VanHart Greenhouses is one of the largest lettuce producers in Ontario. The farm is now completely organic and their biggest sellers are their tomatoes (twenty-four varieties) and edible flowers. Most of their vegetables are grown in a 10,000 square foot greenhouse that was designed to keep plants happy and productive.

Primeridge Pure
"Pure, natural artisan cheese" is how Primeridge Pure describes their products. In operation in Markdale (just North of Toronto) since 2008, this dairy farm only became fully operational last summer, but has since produced five different artisan cheeses, all with evocative names, such as "artemesia mist," a ricotta-style cheese that is silken and sweet. 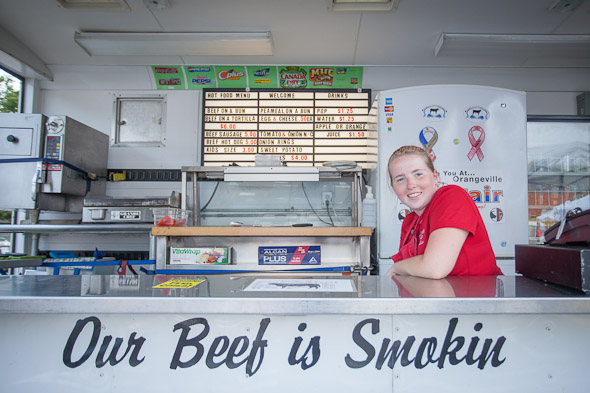 Wooler Dale Farm
This small, sustainable farm in Frankford is known for its salad greens and beets. The van der Heyden family has been running their farm for twenty-seven years and their produce is certified organic. Bonus: they have freshly brewed iced tea for sale. 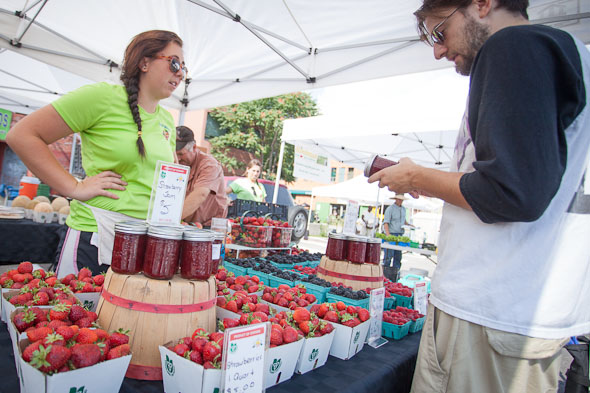 Sun-Ray Orchards
This family farm has been around since 1942 and their five kids help out at the stall selling their fruits, jams, and pies. They have even won an award for their raspberries (which they harvest for up to 10 months of the year)! Expect plenty of tasty choices - they even have some early peaches.

Fiddlehead Farm
This Prince Edward County farm is 128 acres, but the actual market farming is only done on three. Fiddlehead Farms is a very small operation supplying only through Community-Supported Agriculture (CSA) boxes and farmers' markets. Expect many different herbs on offer as well as salad greens and seasonal favourites like peas. 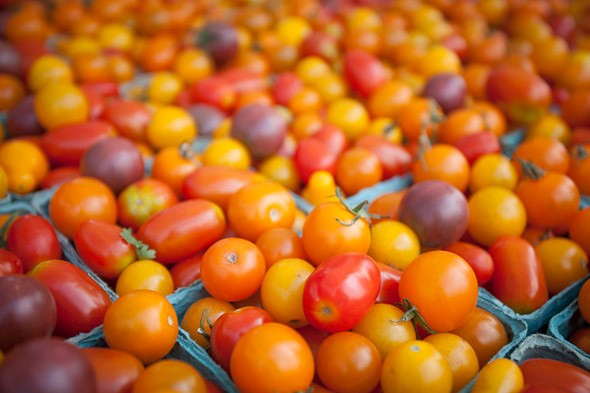 Kimbaya Eco-Farm
Having just received MyMarket certification, Kimbaya Eco-Farm in Brampton is new to the Bloor/Borden scene. They specialize in organically grown vegetables and are sure to be a bigger presence soon. They were having some trouble with their zucchini, but proffered plenty of salad greens and beautiful flower bouquets.

O.K. Farms
Operated by a teacher and a geneticist since 1985, O.K. Farms is a combination orchard and market garden. Both red and golden raspberries as well as potatoes and peas, this farm can't choose when it comes down to fruits or vegetables. 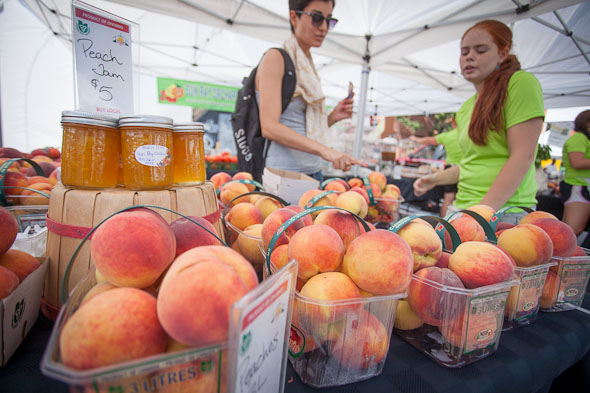 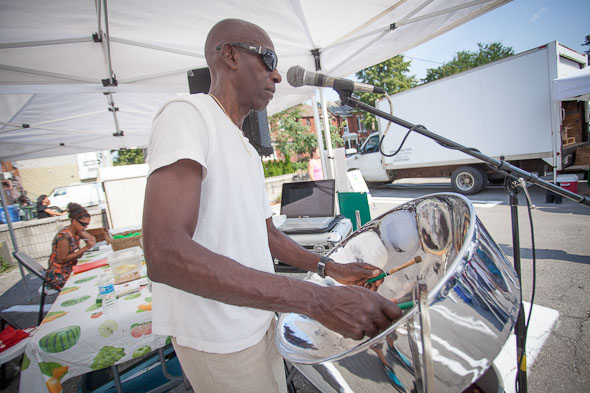 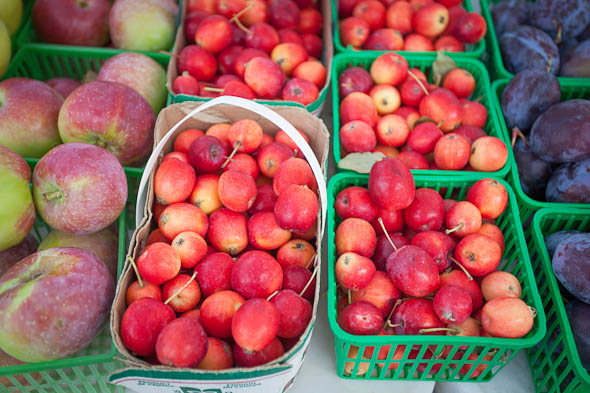 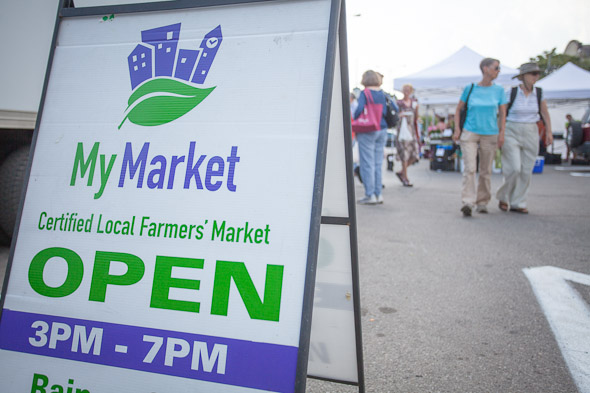 Discover more Farmers' Markets in Toronto via our Pinterest board.