Metro Hall Farmers' Market brings the taste of the country to King St.

On a warm Thursday afternoon, the working crowd has ventured from their dull, grey three-by-three square foot cubicles and left the cafeteria food behind to enjoy the Indulge Your Senses: Sights, Sounds and Flavours series at David Pecaut Square (55 John St., at King and John). The series highlights musical performances, flavours of local restaurateurs and everyone's favourite - a farmers' market with a wide array of fresh vegetables and produce and sweet treats. You can attend Indulge Your Senses from 8am until 2:30pm every Thursday from June to October.

Here are some of the vendors to seek out at the market: 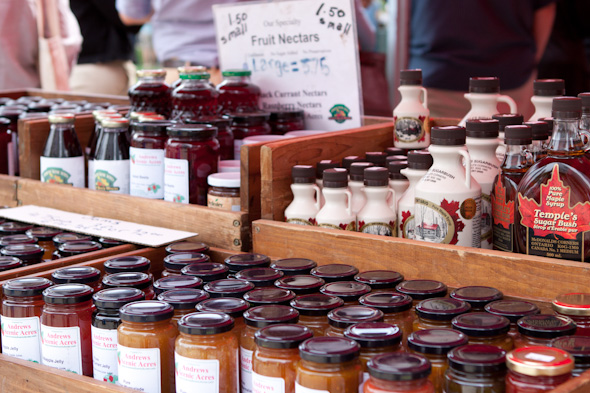 Andrews' Scenic Acres
Andrews Scenic Acres sells mouth-watering baskets of blueberries, strawberries, raspberries and plums, and are known for their array of homemade jams and delicious pies, largely Apple Crumble, Strawberry Rhubarb, and the faithful classic, Apple. But it's their butter tarts that keep me coming back each year. You can choose between Maple and Raisin, but if you have enough change in your pocket and are already planning a trip to the gym this evening, grab both. Yes, both.

Redline Coffee and Espresso Bar
A new day always begins with a positive note if you're holding a cup of java. I saved myself for the dark Ethiopian roast that Redline is serving at the market. The wait felt like it was on the long side, but the result is delicious. In 2010, Julie Van Der Lugt opened Redline Coffee and Espresso Bar at Queen and Parliament in Corktown, and that's where you'll find them the rest of the week. 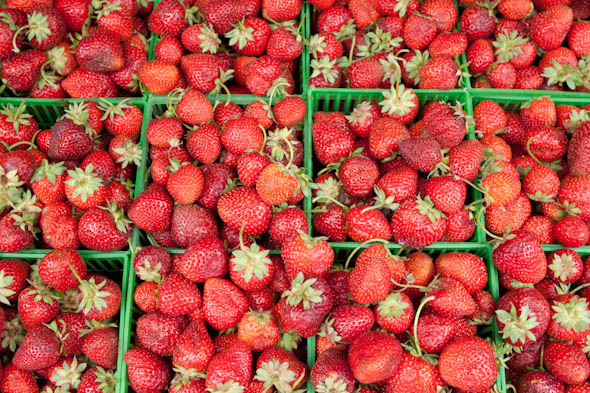 Willowtree Farm
Even before I see what these farmers have brought to share with the city, I am already smitten by the tag line on their truck, "If you ate today, thank a farmer." Willowtree produces and sells some of the freshest fruits and farm fresh vegetables in Durham Region, grown locally and offered direct to the consumer. They support a mixture of sustainable and organic farming practices, with a focus on chemical-free. They are also known for natural beef, fresh home baking, delicious preserves, and their regularly host weekends for visitors to pick their own berries, including strawberries and raspberries. 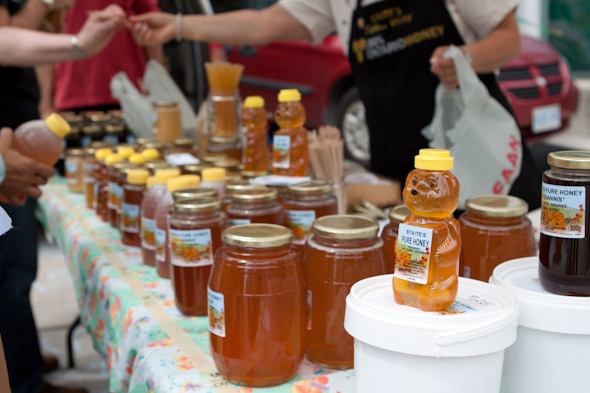 Staite's Honey
Hailing from a little town called Zephyr in Mount Albert, Ontario, Staite's is where many in our fine city go for 100% pure natural unpasteurized Canadian honey. And much like their Market counterparts, they are a family owned and operated business. Staite's also harvests Bee Pollen, which is known to be an energy booster and have a large concentration of B vitamins - it's even been used to help children fight off allergies. Who knew? 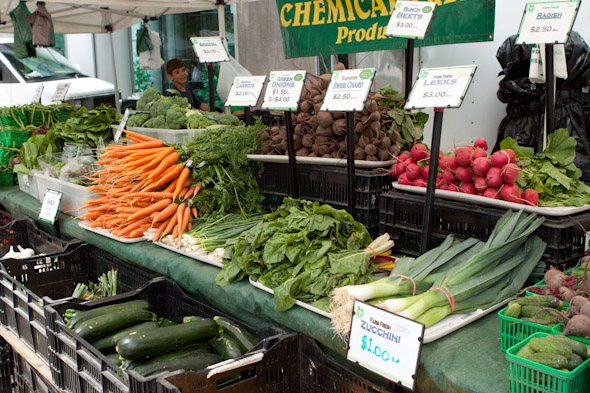 Monforte Dairy Company
Thank goodness I'm not lactose intolerant and was able to enjoy the deliciousness that is Monforte Dairy Company's cheese. Monforte is the brainchild of Monforte owner and lead cheese maker, Ruth Klahsen, who is best known as Chef at two of Stratford, Ontario's best restaurants, Rundles and Old Prune. Ruth says that life is about relationships and her relationship with people is through cheese - no one has ever said that to me before, but I have to say, it really gives the company a personal touch knowing that Ruth grew up locally and has created a successful career out of her passion for cheese.

The food court
Some of our city's neighbourhood restaurants have set-up an out-in-the-air food court to sell some of their menu favourites. The line-ups are all 30-people or more strong, which makes sense, since the work crowd can ditch the brown bag for something much more yummy for $4.50 - $9.00. Some of the local favourites include: Veda Healthy Indian Take-Out, Crepe-de-Licious, Burrito Boyz. 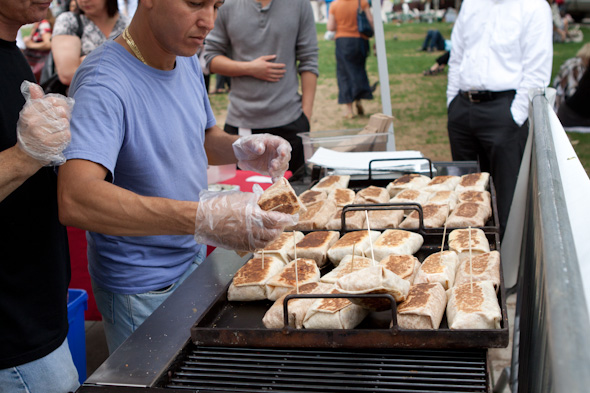 You'll also find independent Market vendors such as Grandpa Ken's Peameal Back Bacon on a Kaiser (which, by the way, had more than 60 people in line!), Jan's Catering Services and More Than Pies Baking Company Limited. 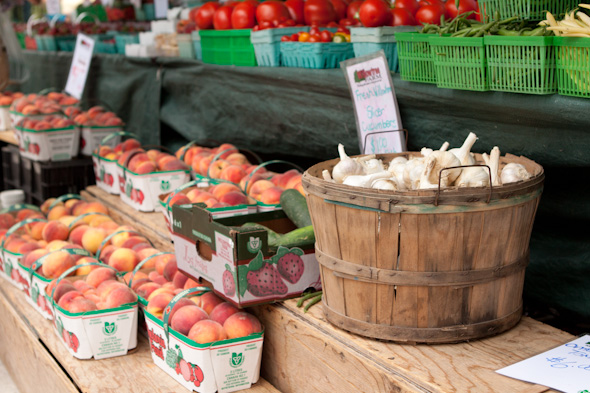 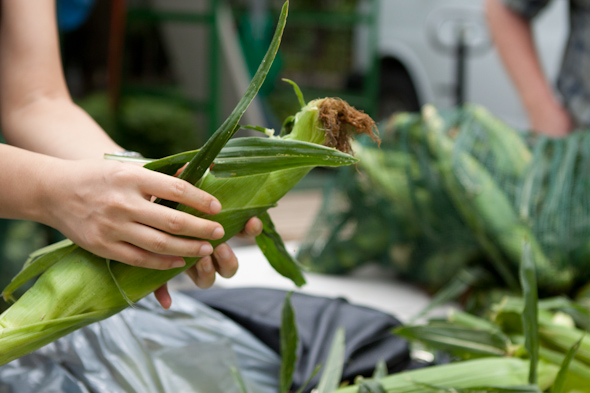 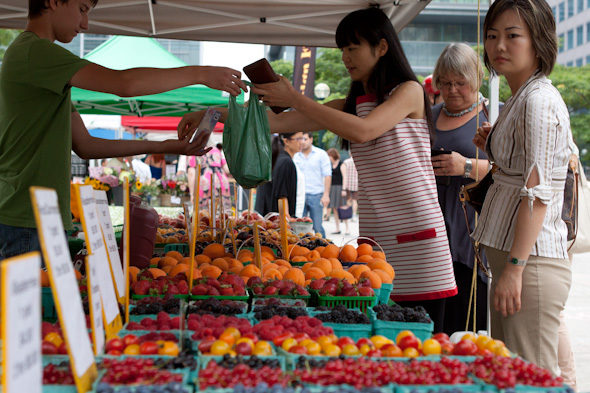 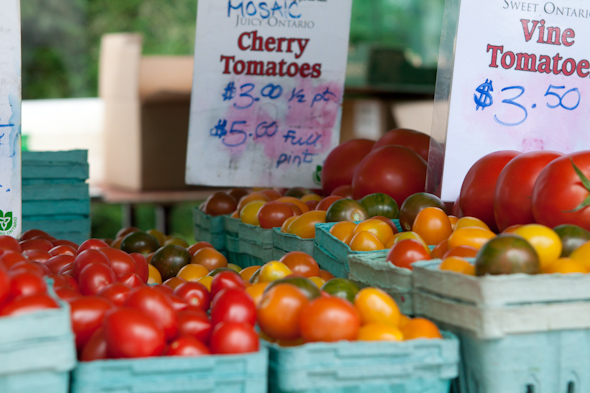