Have you ever wondered how the staff at Queen's Park decides which beers they'll serve at their official functions every year?

But on Tuesday night, I found out.

Seven years ago, then Speaker of The House, The Honourable Steve Peters, began the tradition of "The Speaker's Tasting and Selection," an event where Ontario Craft Brewers bring their products to the Ontario Legislature so that members of provincial parliament and their staff can vote on their favourites in a handful of categories and so that local beer media can pretend to be interested in the process in order to drink vast quantities of fantastic craft beer.

This year the event was hosted by the new speaker, The Honourable Dave Levac, who opted to carry on the popular tradition despite not being a drinker himself (he stuck to craft root beer) and featured local foods from something called The Alliance of Ontario Food Processors as well as cheese from the Three Blind Mice Cheese Company.

The ballot for the evening was divided into six categories and the winners in each category won the privilege of being served in the Legislative Dining Room and at official Queen's Park functions until next year's event.

The winners for each category, yesterday morning, are as follows: 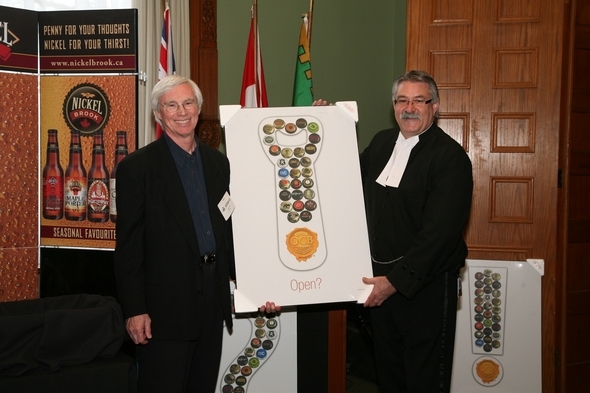 The rules stated that brewers could only bring their all-year offerings to the event, though luckily a few brewers opted to sneak in some seasonals and one-offs for the more discerning beer drinkers in the crowd. Of note in this unofficial category was the much-awaited (in beer nerd circles) Spring Oddity from Muskoka Brewery.

Mike Laba from Muskoka told me that the beer was created by having their brewers combine a seemingly random collection of ingredients that includes, among other things, juniper berries and sweet orange peel. The result is a spicy and strong (8% ABV) herbal-tasting beer that defies definition and certainly didn't taste like anything else at the event (which is saying a lot considering the variety available). Look for it for a limited time only at the LCBO in 750 ml bottles this summer.

As for the real winners on Tuesday, it seems clear to me it was the smattering of enthusiastic beer media on hand. Ontario's Brewers had a good time, posed for awkward photos with the Speaker (see above) and enjoyed each other's wares, but ultimately they were their to sell their products.

Political staffers, while also clearly enjoying the free beer, largely seemed to keep to themselves--and their Blackberries. Some seemed to still be on the clock ("Sir, there's a brewer from your riding you should meet.").

The beer media, on the other hand, were free to elbow their way to all their favourite brewers' tables, drink without discretion, fill their pockets with stickers and key chains, and then stumble home with a six pack under one arm.

We'll see if I get invited back next year.

Photos courtesy of The Office of The Speaker and Boost PR