Lobster coming to a Toronto food truck near you

On Monday night Toronto showed some more love for street eats at The Next Food Truck event. Hosted by Steamwhistle Brewery and organized by Suresh Doss of Food Truck Eats, this latest event had everyone wondering who would be the next vendor to go mobile.

The event combined food and art, both with a street vendor theme. Doss, like the rest of us is tired of trucks selling "grilled cheese, cupcakes and hot dogs", and wanted this event to bring to light other gastronomical possibilities. Participants included pop-up extraordinaire Fidel Gastro, new TUM favourite Rock Lobster Food Co., Ryerson institution Salad King, and some up and comers like the Ninja Piggies, who once fantasized of bringing street food to the masses while evading the law by selling their sandwiches out of an unmarked moving van...dressed in ninja costumes. I'd buy one. 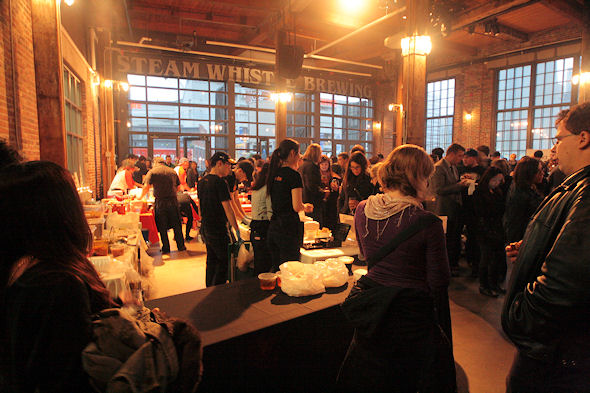 I had a chance to talk truck politics with Doss, and to hear his thoughts on the ideal situation for Toronto vendors on wheels. Back in 2002, a moratorium was placed on Designated Vending Area permits. Any food trucks already in operation before this time were safe (think the ice cream and poutine guys curbside at Nathan Phillips Square), but they did not, and still don't, have any freedom to change location. So there they sit. They do have the freedom to change their menus, but I wouldn't hold my breath.

Doss doesn't think having Toronto trucks curbside is the best way to go anyway, citing examples of failure in New York and Boston. In his opinion, the best way to avoid all of the red tape is to park trucks on private property. And this is what Doss would like to see more of - food trucks establishing more than just temporary relationships with private commercial zones. 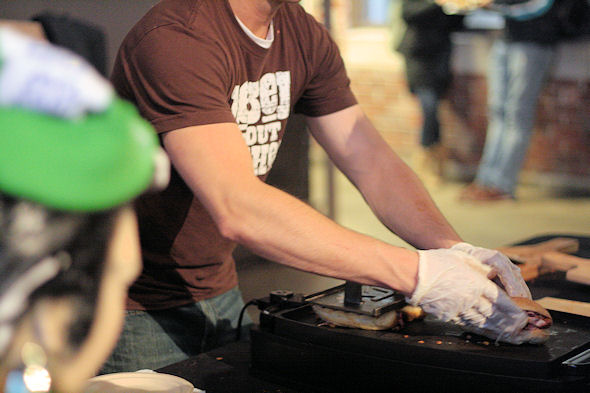 The majority of the vendors I spoke with are satisfied with the status quo - as events such as last nights are so popular - but said they would like the opportunity to have a truck if it wasn't for all the bylaws. Matt Basile, of Fidel Gastro's is happy to be the "pop-up guy" but would love to see the food truck industry take off because not all talented chefs have the funds to start up a restaurant, and good food "shouldn't be pretentious, but it should bring people together".

I am happy to report however, that the people behind the table with the longest line-up had a different announcement to make. Rock Lobster Food Co. confirmed that they will have a truck in 5 to 8 weeks, thus bringing lobster to the streets. The location is yet to be determined, but involves a restaurant partnership. Look for them at the Food Truck Block Party on May 5th at Evergreen Brickworks where they will be serving a new item... lobster poutine. Get ready to line up. 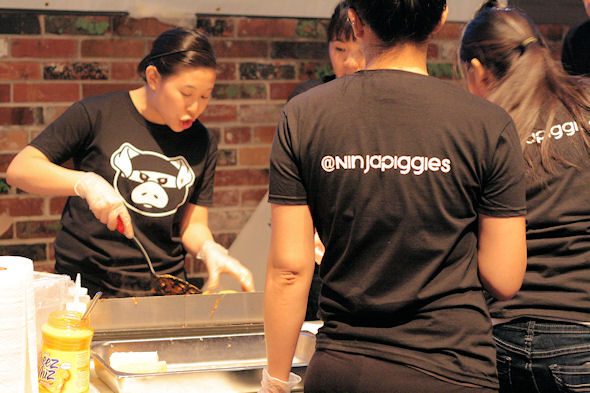 Whatever the political future holds for street food in Toronto, one thing is certain - there is a market for it. The people in this city have a love for street food, and it's a powerful love... a love that drives some to do crazy, but very practical, things. I saw folks last night with Tupperware, cutting boards and shears, yes shears, to divvy up their purchases. I learned it's possible to cut a Philly cheesesteak with scissors...but it ain't pretty. I saw one man wearing a plastic lobster bib that I'm pretty sure he stole right off a Rock Lobster's chest.

As for the future of Food Truck Eats, Doss says they plan on being back at Steamwhistle for more food and art fun. Also in the works is a little something called Food Truck Eats Tune Up to take place later in the summer which will combine art, awards, and of course, more food.

Footnote: The highlight of the night for me was the La Senorita offered up by Fidel Gastro. They never cease to amaze me. And I really like being cheered and applauded just for eating a sandwich.