When I first moved to Canada I used to wonder why, with the large number of Chinese restaurants in the GTA, were there no well-established "real" Chinese restaurant chains. At that time, all we had were Mandarin, Ho Lee Chow, and Manchu Wok. Now, I have nothing against any of them, but they're probably what could only be politely described as "Canadian-Chinese" restaurants. As my 12-year old niece would (probably) say, "Y U NO REAL." And therein lies the crux of the problem, many Chinese people would just label these chain establishments as "fake Chinese" and leave it at that.

For years I waited, and my prayers were largely answered with the addition of what I humbly consider to be the first bona-fide Chinese restaurant chain in Toronto: Asian Legend. First established in 1988, according to its website, it has aggressively expanded to multiple locations in recent years, and as of right now the total tally stands at six.

If you've been around Toronto and its 'burbs in the past five years or so, it's impossible that you haven't heard of Asian Legend. The chain has quickly evolved into local favourite by offering traditional and authentic Chinese dishes in a modern and relatively upscale environment. The uniformed servers are usually conversant in English, and the service is usually good (which is unfortunately more than one normally expects from many Chinese restaurants). In short, it's like a restaurant offering Chinese food but with (relatively) Western standards of customer service and ambiance. Good food and predictable quality. Sounds like win-win, right? Well, almost!

Asian Legends have a high degree of uniformity with regards to food quality. Unfortunately, as is the case of any sit-down restaurant, there will always be differences between locations because of the complexity involved in the preparation of the dishes and the physical limitations of each particular location's layout.

Admittedly, most of the Asian Legend restaurants have very similar food offerings, and as such the differences between locations usually (though not always) fall on subtler details such as layout and service. Having said that, I present to you in this post, my personal rankings of the six Asian Legend locations in the GTA, along with a quick snippet as to why I've ranked them as such. 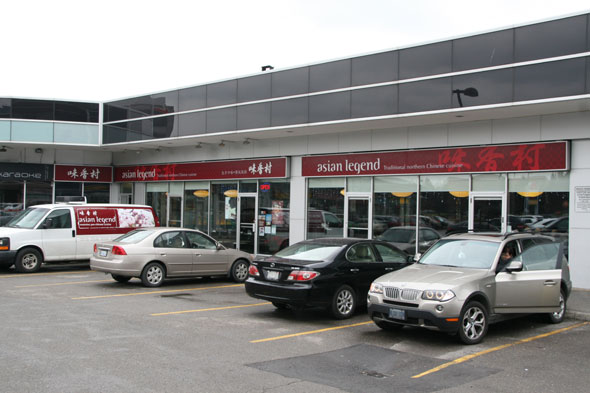 Number 6 (Wooden Spoon Award): Thornhill/Richmond Hill location (505 Hwy 7 E. #77-79, Thornhill)
A bit ironic considering the high concentration of Chinese residents in the area. The main problem here is the service. It's mediocre at best. I once made a reservation here only to be told when we got there that our reserved tables were not going to be available because they wanted to accommodate walk-in customers. And we didn't even arrive late. The low ceilings and rather cramped location also make the dining experience loud and uncomfortable. Also, parking is a bit of a nightmare here as the lot is almost always full. Food-wise, however, I have no complaints as the quality is up to Asian Legend's usual standards.

Number 5: Downtown Toronto location (418 Dundas St West, Toronto)
Service at the Chinatown location is friendly and efficient. The restaurant probably caters to more non-Chinese clientele here than usual and as such the staff here seem to speak better English. However, this Asian Legend loses points because many of the dishes, especially ones that involve frying, lack the complex flavours prevalent at its suburban counterparts. The food also seems oilier, reminiscent of "Westernized" Chinese food. This difference may be an intentional strategy to appeal to a different downtown client base but, either way, the food is definitely not as tasty as the other locations. Still, it's one of the cleanest restaurants you can expect to see in Chinatown.

Number 4 and Number 3 (tied): Markham (3636 Steeles Ave. E. #152, Markham) and North York (5188 Yonge St., Toronto) locations
The mid-table performers. The Markham one, located in Metro Square mall, is a bit on the small side but is car friendly with plenty of available parking while the North York location has convenient access to the subway but not great parking options. Service at both restaurants is solid and very efficient and professional during busy hours. Food quality is also good and up to par to Asian Legend standards. Both locations have slightly low ceilings though so noise does carry through a bit.

Number 2: Finch and Leslie location (125 Ravel Road, Toronto)
I briefly considered going for a 3-way tie between this location and the previous two, but then decided against it because this particular one has one thing that the other two lack: great ambiance. The restaurant may or may not be bigger than the Markham and North York locations, but it definitely feels more spacious. The dĂŠcor is more modern and fancier too and parking is plentiful. Service is very good with many servers sharing a laugh with the patrons (always nice to see). Overall, this Asian Legend delivers a good, solid experience, eclipsed only by the awesome.... 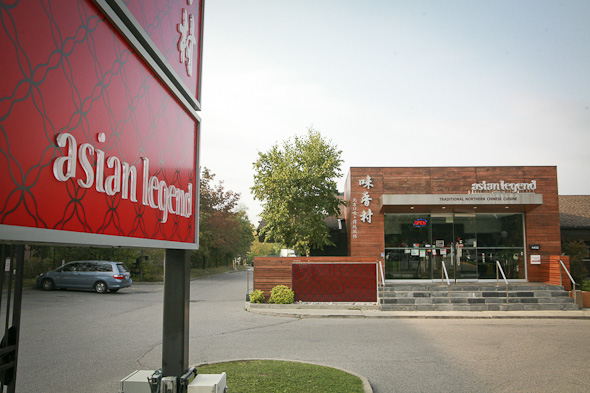 Number 1 (Champion!): Scarborough flagship location (4452 Sheppard Ave East, Toronto)
This location is, all my friends agree, the undisputed number one spot for Asian Legend lovers. Found in what I believe used to be a Swiss Chalet restaurant (back when they still looked like chalets), this location has very high ceilings and lots of room between tables, making the entire experience feel a bit more upscale. Sound doesn't carry as much, so you can actually have conversations and even (gasp) take dates here. They also have very nice private areas, and provide top notch service. I remember going here with my family on Chinese New Year's Eve (which is a potential catastrophe service-wise for many restaurants) and the servers were efficient and amiable. They also serve excellent Peking Duck.