Amsterdam launches a beer you could subsist upon

You want to subsist on nothing but beer? It is possible. Bock beers, a traditionally sweet, relatively strong beverage with low carbonation, were originally brewed in Bavarian monasteries for consumption during Lent. They typically have such a high nutritional content that monks used them in order to get through 40 day fasts.

In honour of this Spring brewing tradition, this year Amsterdam Brewing Company has once again brewed a batch of their "Spring Bock," a dark, sweet, and smooth bock which will be available at the LCBO, on tap at select locations, and at their retail space for a limited time.

While I don't know any monks, it seemed like a hit to the 40 or so people in attendance last night at "Rock Out With Your Bock Out," an event at the brewery to mark the occasion of the Spring Bock's launch this year. 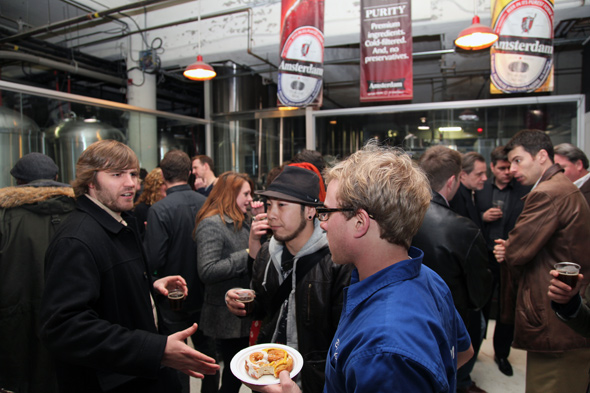 The event featured some food from Grindhouse Burger Bar and, naturally, samples of this season's offering. Given that bocks tend to age well, also on hand were draught offerings of the 2011 and 2010 Spring Bock batches. And, while I have never had much luck keeping beer in my apartment for any length of time, Amsterdam marketing rep Blake van Delft's suggestion to hide a few bottles away to see how it ages seemed well founded given that there were definitely distinct differences in each vintage.

Essentially, the longer you let this beer age, the sweeter, smoother, and more complex it will get. All three offerings had a sort of sweet caramel aroma and taste with some dark fruit notes and maybe a touch of chocolate, but the younger offerings definitely had a bit more bite in terms of their hoppiness and carbonation. All of them were easy to drink (especially after a few trips to the sample bar and an accompanying slider), but there's clearly something to be said for the interesting things that develop with this beer if its given a chance to age.

While Amsterdam has brewed considerably more of the Spring Bock this time around given its popularity last year, it is a seasonal offering and will only be available while supplies last.