Food trucks could become a fixture at Yonge & Gould

Ever since the former Empress Hotel was gutted by fire in early January, there's been considerable speculation about the future of the now vacant site at the southeast corner of Yonge and Gould streets. As was to be anticipated, Ryerson University has shown interest in developing the site. And it's also been mentioned as a possible location for a new entrance to Dundas Subway station. Just the other day, the Grid's David Topping spoke with Noori Lalani, one of the landowners, who promised the eventual construction of a "first-class building" but little by way of concrete details.

While the long-term future of the site remains up in the air, an intriguing possibility for how the land will be used in the meantime is shaping up. Announced to a flurry of activity on social media yesterday, Spotlight Toronto publisher and food truck ambassador, Suresh Doss, is bringing a mini Food Truck Eats festival to Yonge and Gould this Friday — an event that might become a common sight at the location should all go according to plan.

"One of the owners had the idea to turn the space into a food hub," Doss explains. "This is something that might work in a semi-permanent capacity, so Friday is a test of the space to see what it looks like with lines and food trucks." 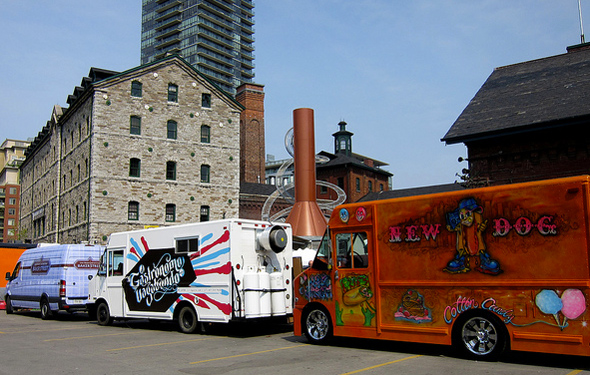 Doss also plans to host another Food Trucks Eats the following Friday with an eye toward a bigger event nearer to the holiday season. At this point, however, the organizer of the popular food truck festivals needs to make sure that the site is a good fit. "The Lalani group really wants to use that space for some food programming," Doss told me over the phone. "That being said, since nothing has been attempted in the space, it's really a matter of testing it for a few months to see what can come out of it."

Asked what might play out if all goes according to plan, Doss didn't rule out the possibility of a more regular presence at the site. "I foresee that the trucks will be there on a rotating basis at least once a month if the first two or three events take off. Then come spring, it could be daily," he said. "It's a matter of seeing if there's a market. The event on Friday is really a small step in that direction. I have carte blanche to do what I want with the space because they've seen value in the Food truck Eats and street food events."

In addition to this need to determine the relative level of demand for food trucks in the area, there are logistical issues like Hydro and heat to be addressed, especially as the events stretch into the beginning of winter. Doss doesn't, however, expect to encounter resistance from the City of Toronto. Because the space is already zoned for commercial use, parking the trucks shouldn't pose the type of difficulties one faces when looking to set-up at the curbside.

Area councillor Kristyn Wong-Tam has indicated on a number of occasions that it may take a while before the southeast side of Yonge & Gould is re-developed, but assuming that Toronto's hunger for food trucks remains as ravenous as it has been throughout this past year, the corner may get a most welcome injection of life for the foreseeable future.