Well, this ain't going to be good for business. The Pusateri's location on Avenue Road, one of Toronto's original high-end grocery stores, has been shut down due to public health violations. "Toronto Public Health responded to a complaint today and has subsequently issued a closure order for the store due to poor sanitation and pest infestation," Rishma Govani, spokeswoman for Toronto Public Health, told the National Post. "It is up to the operator to improve their services and arrange a re-inspection with the Public Health Inspector."

The City of Toronto has yet to update their online DineSafe records, which also include grocery stores, so it's not possible to determine the extent of the violations, but the Star reports that Pusateri's general manager John Mastroianni has admitted that cockroaches were found in the store. When the doors were first closed at around 3 p.m., on the other hand, he claimed that it was for "general maintenance."

That cockroach problems would fall under the heading of general maintenance is probably not the message he wanted to communicate. 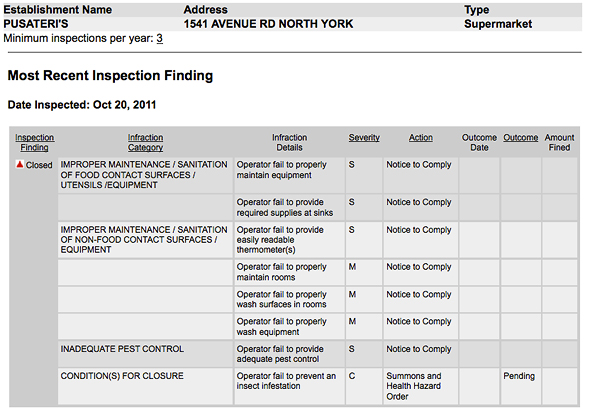 With the release of the DineSafe report from the City of Toronto, we now have a better idea of just why Pusateri's was forced to shut down earlier today. There are a host of infractions the grocery store is cited for, including inadequate pest control and improper maintenance / sanitation of food contact surfaces, equipment and utensils, but the key bit of information comes in the form of confirmation that there was an insect infestation in the store. It could be worse I suppose (see below), yet one wonders if this won't negatively impact Pusateri's reputation for sometime.

Still, it looks like they're taking it all in stride. 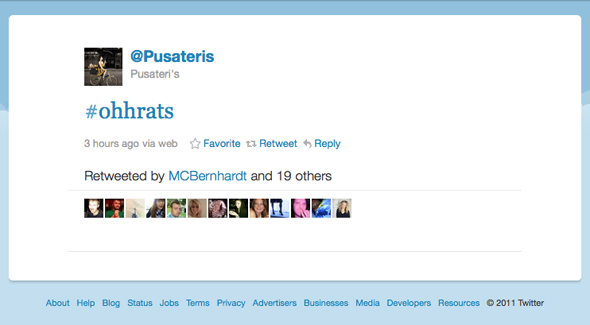 As hinted at by the tweet above, the infestation at Pusateri's is/was not limited to cockroaches. "It was evident there was poor sanitary conditions and infestation of both rats and cockroaches," confirmed Rishma Govani of Toronto Public Health last night. The grocery store has also distributed a press release that offers some additional details and unsurprisingly downplays the significance of the infestation:

"During the investigation, a small portion of the storage area and walk-in coolers as well as 'hard-to-reach and obscure locations' seem to have been infested by pests, which may have been missed as a result of human error during our on-going routine maintenance. The situation is already being dealt with including the complete removal of all goods in the effected areas to ensure no further problems arise... None of our public areas have been affected by this incident. Our location has operated for 25 years with complete compliance Toronto Public Health regulations. We are committed to following our track record as soon as this incident passes."

I love the use of the word "seem" in the above â as if it's still possible that there might not have been a problem. No dice, Pusateri's. No dice.

We've been told by Pusateri's PR team that the @Pusateris Twitter account from which the screengrab above derives is not officially linked to the grocery store. Although the tweet history extends back to late May and has been used for things like announcing sales and thanking customers, perhaps the sense of humour displayed in the face of recent events really was too good to be true.