How to become an amateur chocolatier

David Levy has had a fascination with chocolate all his life. It began as a child when his father would bring treats back from his travels in Europe. Years later, after spending a number of years working in professional kitchens, he convinced a friend of his, recently back from a stint in Belgium, to teach him the ways of the chocolatier. David appointed himself apprentice and devoured as much knowledge (and chocolate) as he could manage. Out of that came Chocolate Tales, his mobile chocolate school.

Basically, the way it works is this: you sign up for one of his lessons through his website, and learn how to make things like ganache, fondant, tempered chocolate, truffles, flake and all sorts of ways of combining them. Then, should you manage to restrain yourself from consuming all your wonderful creations, David shows you how to wrap them up in a pretty little box to take home with you. 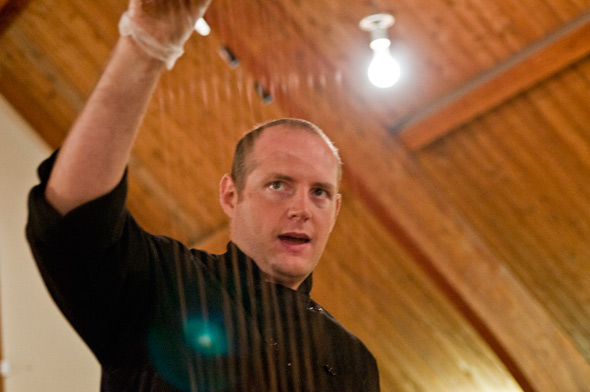 Tonight's seminar takes place at the 918 community centre just north of Bloor on Bathurst. The room is a large, great hall with arched ceilings and a stage--kind of a cross between a gymnasium and a cathedral. The long folding tables are covered in plastic and arranged in a horseshoe with a display counter front and centre. At each place setting is a paper cup of cocoa powder, grated coconut, a dipping tool and a plastic apron.

While it appears an appreciation for (and desire to create) chocolate is ageless and colourblind, the gender divide is pretty prominent. It's just Levy and I representing the gents this evening, though he assures me the skew is seldom this drastic. 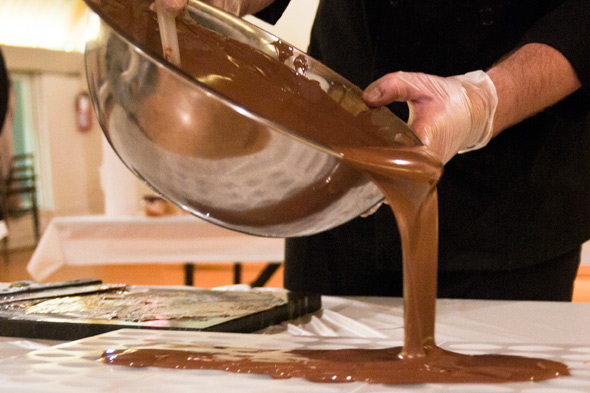 The evening begins with a little history lesson. While these days nearly half the world's chocolate comes from Cote d'Ivoire, it was initially cultivated 3,000 years ago in Mexico and Central America (though in the age of Montezuma it bore little resemblance to today's sweet confections). The Aztecs didn't use milk or refined sugar at all and thus, cocoa was made into a hot, ceremonial beverage known as xocolatl or, "bitter water."

It wasn't until the bean made its way back to Europe that it began its transformation into the creamy, sweet, sublime stuff we know today. 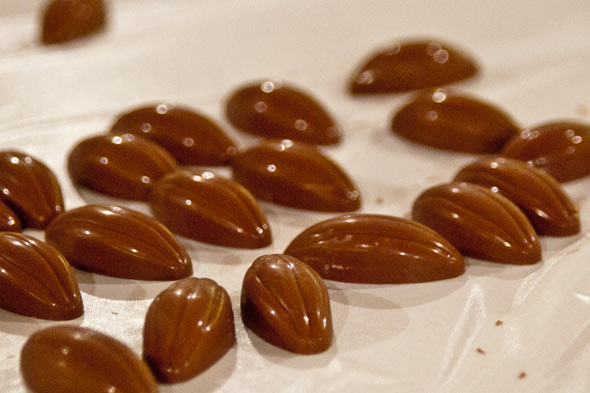 And that is precisely where we begin, as Levy speaks, tasters are passed around to demonstrate the versatility of chocolate. The first is mixed with cinnamon, which cuts right through the richness of the chocolate and sits front and centre in the flavour profile. The next is ginger, less pronounced initially, but with a wonderful, pungent aftertaste. Finally, cayenne pepper, which adds just enough heat to balance the sweetness of the chocolate.

After the amuse bouche the crowd is more than ready to get their hands dirty. Small slabs of ganache — the creamy insides of a chocolate truffle — are passed around. There are a few necessary skills required to role truffles. First, one needs to move quickly, lest the chocolate gets all melty. Second, keep your hands cold — same reason. There's a balance here somewhere that probably equates to: time=speed/heat or something.

Regardless, my hands are feverishly hot. Hot enough that my mathematical equation breaks down and no amount of time in my hands, no matter how small, will produce a perfect little round sphere of a truffle. So, my Willy Wonka dreams were dashed as quickly as they had arrived, and my truffles were pancake shaped, though I pretended it was on purpose.

I'm happy to say I fared much better in the other exercises though. Dunking ganache into molten chocolate? Check. Rolling truffles in flaked chocolate? Like a pro. Getting all Jackson Pollock with some liquid white chocolate? No. Big. Deal. 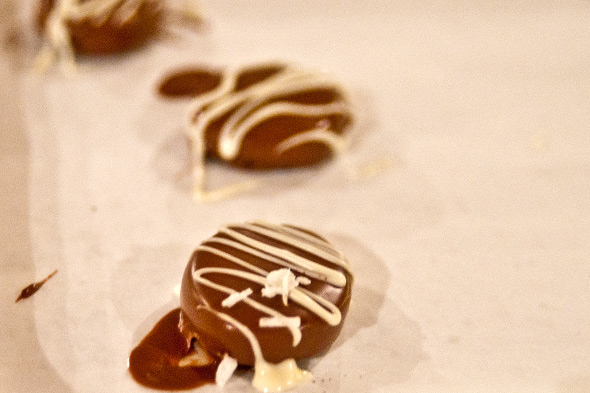 So, while biology seems to have prevented me from a glamourous life in chocolate, it really is a lot easier than one might think to do at home. Plus, it was an interesting and fun 90 minutes, and I went home with a box of bonbons I made all by myself — best chocolates I ever had.