Is today's food truck pop-up a sign of bigger things to come?

First things first, the El GastrÃ³nomo Vagabundo food truck will be making an impromptu appearance at King and Leader Lane today between 11:30 a.m. and 1:30 p.m., where guest chef Francisco Alejandri (of Agave & Aguacate) will be cooking up a four item menu that includes an oaxacan ceviche, crab cakes, fried chicken balls, and a salad with tomatoes, peaches, pesto and goat cheese (each item is $7).

Although it's strange to characterize anything to do with a food truck as a pop-up — isn't the fact that they can set up pretty much anywhere their calling card? — I suppose the reference must be to Alejandri's menu, which isn't normally on offer from El GastrÃ³nomo Vagabundo.

But here's the potentially most exciting bit of news related to today's pop-up: it sounds like Food Truck Eats organizer Suresh Doss has a deal in the works to create something permanent in Toronto. He's already met with Councillor Kristyn Wong-Tam, and told Toronto Life that a "street food market will be located in a well-known landmark space that will be announced on a future date."

The details have yet to be released, but we're hoping for more information next week. This would, after all, be a most welcome addition to our streets. 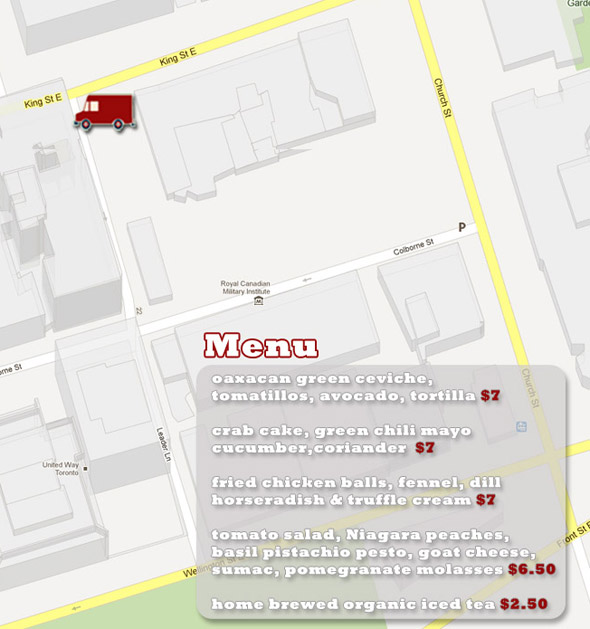