Top Chef Canada held its media launch on Thursday afternoon at the AGO, where the six Toronto contestants and one Hamilton contestant gathered to complete a mock "quickfire challenge" in the hopes of garnering even more hype for a show that's already got its buzz machine in full gear leading up to its April 11th launch.

Hosts and judges Thea Andrews and Mark McEwan were on hand to introduce the challenge, which fittingly incorporated those in attendance: make enough hors d'oeuvres for 25 people in one hour, using three main ingredients. 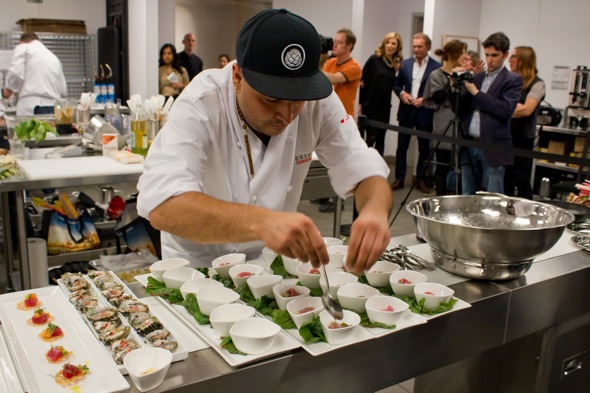 The chefs were each given fois gras from Quebec, tuna caught off the East coast, and Kumamoto oysters from the West coast. In addition, there was a "fresh market table" they could grab additional ingredients from in a free-for-all, sometimes causing a bit of a scuffle - such as when all the cilantro disappeared.

"One hour challenges are tough," said McEwan, "by the time you grab all your ingredients, get into position, and figure out what you want to do you've probably already burned 15 minutes of your hour." 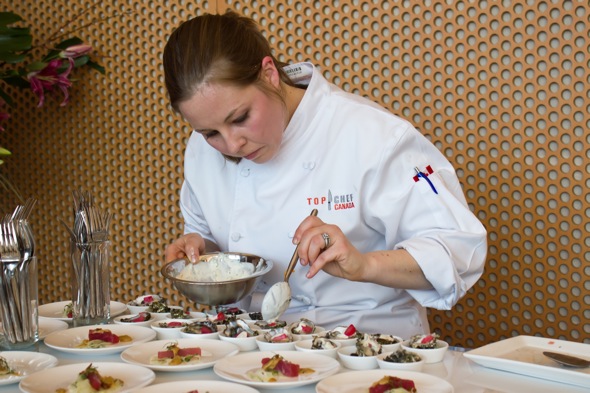 They can be even tougher when you injure yourself in the middle of it. Rob Rossi, an executive chef at Mercatto, sliced his finger open with about 20 minutes left on the clock - costing him the time he needed to prepare a second dish.

"It screwed me up, but that's how it goes," Rossi told me, shrugging off the incident, "If you cut yourself in the middle of something, you just gotta roll with it. I'm glad I finished." I watched as Rossi's cut - which seemed pretty bad, from a bystanders point of view - had to be bandaged not once, but twice during the competition, all in all costing him about 10 minutes of precious cooking time. 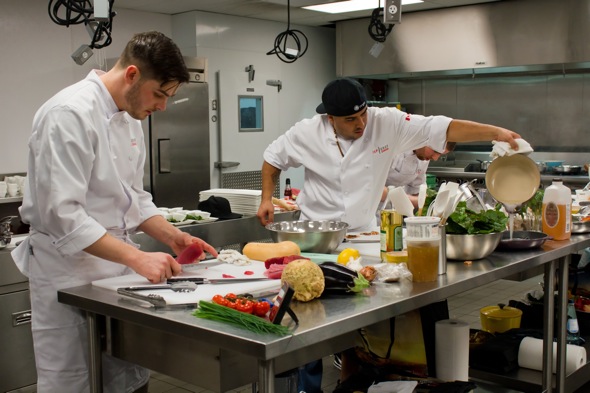 One thing I did note throughout the hour was the friendly banter between the chefs, and how helpful they were to each other. Perhaps it's because the real competition has already taken place â the filming for the show has already wrapped â but I watched as the chefs gave each other ingredients, called out when someone's pot was boiling over or food was burning, and shared pots and pans.

As someone who watches a lot of reality TV, I was surprised it wasn't a little more cut-throat. They could have at least feigned some additional drama for those gathered to "judge" the event. 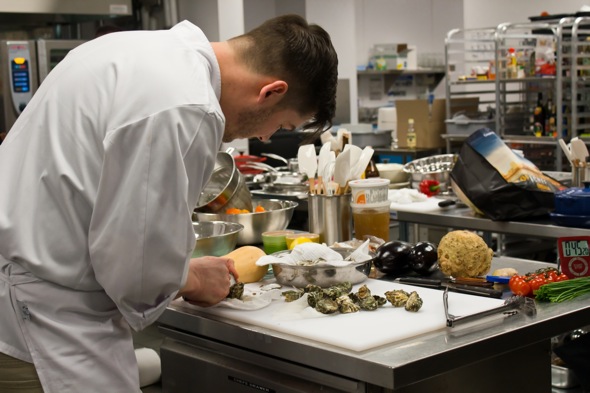 But, as someone who's a very picky eater, I have to admit that even I was impressed by the quality of the food. Although there was no actual judging at the end, I don't think I could have picked one clear winner anyway.

The judges certainly had their work cut out for them during the show - and if this is the quality of food that came from just seven chefs, it'll be interesting to see what the complete pool of competitors can come up with. Let's just hope the real competition proves to have been a little more cut-throat.