Is Toronto set to get an underground food market?

All the rage in San Francisco right now, it appears someone's trying to put together an underground food market in Toronto. Based on a perusal of the website devoted to the project, it's still too early to tell if the idea has any real legs, but it's a pretty intriguing prospect for those fed up with Toronto's street food regulations. Of the many stipulations, home chefs are forbidden from selling their wares at a farmer's market unless they're made in a commercial kitchen, which is pretty much a non-starter.

Inspired by the SF Underground Market, which stared in a private home in 2009 and has grown to include 47 vendors and over 1000 attendees, the Toronto version is in its absolute infancy (it's basically just a Tumblr blog right now). Its success will thus depend largely in the level of interest shown by the community at large. According to the recently created website â the first post is dated April 26th â the market is currently looking to drum up interest from those willing and able to sell their food.

"I am in the process of bringing the dream to fruition but I need vendors. FOODIES: If you like to cook for your friends & family, but want to get your food out there, contact me.This will not be possible without you! I hope to bring together ambitious like-minded cooks. The Toronto Food community needs to taste your talent," so reads the call for collaborators.

The SF Market bypasses street food regulations by operating as a members club, which one would expect would be the strategy here as well. So while I'm not so big on the word "foodie" being used so unabashedly, it'll be very interesting to see how this all plays out. We've sent off an inquiry for more information, and will update this post if and when we receive it. In the meantime, home chefs eager to test their mettle might want to think about signing up. 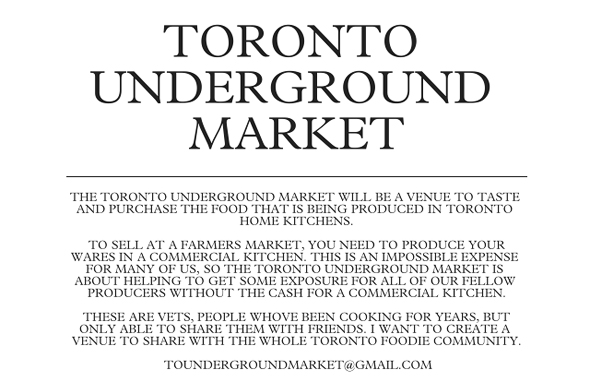