A fiddlehead throwdown at La Palette

Fiddlehead season will be indefinitely delayed. At least that's the impression I get from this crazy cold snap that's settled on the GTA recently. Normally, locavore thoughts turn this time of year to visions of gobbling up heaving plates of the local delicacy, (the young, unfurled fronds of the ostrich fern) though this year you'll be waiting a while longer yet for them to poke through the semi-frozen dirt on farms and in forests around the golden horseshoe. 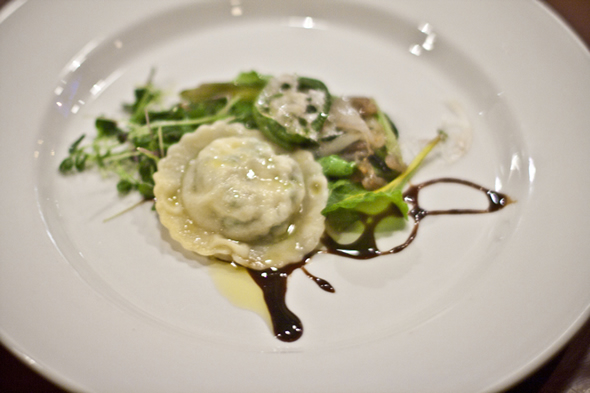 The people at Norcliff Farms seem to be a bit more optimistic by virtue of the fact that these hearty plants, they inform me, can grow up to six inches in one night. Thanks to the lack of cooperation from Mother Nature though, they had to settle for providing frozen specimens of their #1 crop for a recent culinary throw-down at La Palette that featured fiddleheads as the not-so-secret ingredient.

The iron chefs for the evening were, in order of course served: Eric Henry Andersen, sous chef of Inn on the Twenty in Jordan; Kyle Christofferson, executive chef of Luxe Bistro in Ottawa; and Chef Brian Scot Pingle of Gossip Restaurant in Toronto.

Don't know if the fact that I had never previously tasted these curly emerald local treats made me more qualified to judge the relative merits of dishes produced with this veg, by 3 Ontario-based chefs or less, but I took my seat at the blogger end of the table with some other guest judges including View The Vibe's lovely Nicki Laborie (dunno why Chatto wasn't at our end, he blogs, right?) while nutrition experts/bloggers Meghan Telpner, Joy MacCarthy, and Julie Daniluk gave me the "skinny", schooling me on the health benefits of the humble fiddlehead.

According to the ladies, fiddleheads have higher levels of antioxidants than blueberries, are a source of Omega 3 and Omega 6 fatty acids, and are high in iron and fibre. They're also pretty tasty, kinda like a cross between spinach, rapini, and asparagus (minus the unfortunate, malodourous side-effects). 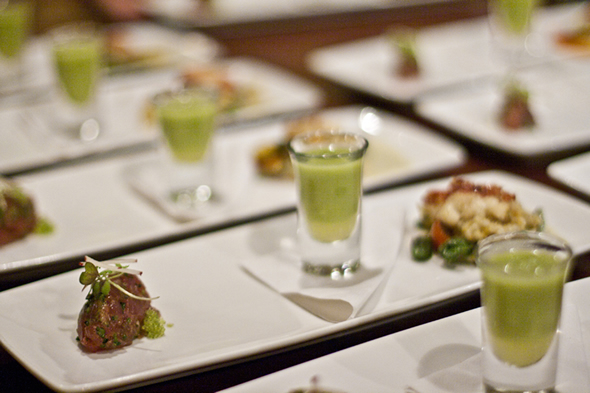 By far my favourite dish of the evening came from chef Andersen who prepared an Upper Canada Raviolo stuffed with locally made ricotta and chopped fiddleheads blanched in chicken stock. Riffing on the classic ricotta 'n' spinach ravioli, this version was cented with thyme and a little nutmeg presenting fiddlehead front and centre in the pasta dish.

The addition of candied fiddleheads, a tangy gastrique, and a pureed fiddlehead sauce played a wicked contrast, teasing with sweetness while highlighting the wonderful earthy bitterness of the plant (a risky approach since bitterness is probably the least popular of the 5 tastes in our culture), presenting it in a number of variations throughout the course of the dish.

Another highlight was the appetizer prepared by La Palette's head chef Brook Kavanagh (who wasn't competing) that combined earthy morel mushrooms and a little duck confit with the cruch of verdant fiddleheads for a real homage to rural canadian flavours.

Eventual winner, chef Christofferson, prepared a fantastic dish of tuna tartare, poached lobster with fiddlehead barley risotto and a fiddlehead/pineapple/kiwi shooter that offered with a variety of textures and flavours. Highly enjoyable and inventive in its own right, the winning dish didn't really feature fiddlehead very high in the mix which I thought was the point of the competition. The lobster was cooked to near vulcanization, a fact the chef apologized for. The tartare was fantastic though: fresh, clean flavours with a hint of fiddlehead crunch to mix things up.

All in all, the meal was a fantastic introduction to Matteuccia struthiopteris which will soon be available at grocery stores and farmers markets throughout the GTA (and even forageable if that's yer bag), and I for one am looking as forward to more fiddleheads as to the warmer temps.

For anyone interested, here's the recipe for the raviolo which is definitely doable at home.