Pass by too quickly and you might mistake it for a Coffee Time, but yes, that is indeed "Coffee Lime" at Pape and Floyd.

What's the difference? Well, once you get inside, not a whole lot. There's the buzzing of the coolers, the confusing range of menu options (Care for an espresso? Omelette on a waffle? Hot dog?!), and mostly vacant tables. It's been a curious fixture on Pape for years, taken over by new owners in 2009.

I tried to find out more after heading inside, but the woman at the counter spoke little English. She smiled sweetly though, so I bought a drink at sat down at one of the joint's three tables. And guess what I found waiting for me at the table: why an abandoned Toronto Sun, of course! Just like you'll find at many Coffee Time locations around the city.

Here at Coffee Lime, though, they've opted for pink tables and chairs, rather than the regulation red and gold sported at Coffee Time. But the two businesses share in their menu options, which include Boston Cremes, beef patties, and egg salad sandwiches. Though I don't think they have hamburgers (yet) at Coffee Time.

"Christina. Christina!!!" I heard, interrupting my daze. The woman at the counter scurried over to a man sitting at the table next to me. He appeared to be a regular.

Or something like that. She topped up his cup. 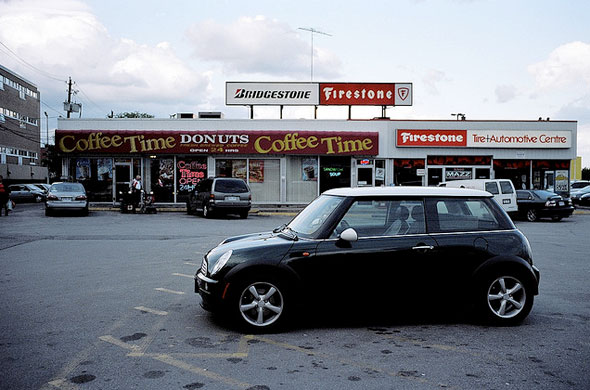 There's similar entertainment at the Coffee Time on Yonge north of Wellesley (not the one pictured above). The fairly large space was shared between me and a gentleman with a handlebar mustache until a fellow with his pants at his knees entered to use the bathroom. "OK," the woman at the counter said, handing him a key. "But don't smoke it there." Meanwhile, pedestrians passed by outside carrying Lacoste shopping bags. How's that, for juxtaposition!?

Though Coffee Time and Coffee Lime share in their plastic signage ("Ham it Up" on those of the former, "Hotdog & Fries" on the latter), there are a few key differences. Namely, Coffee Time actually offers fair trade, organic coffee (who knew?), but Coffee Lime has soft serve ice cream and, as mentioned, omelette on a waffle. Obviously, this one's a toss up.

Coffee Time photo by funkaoshi in the blogTO Flickr pool