A new way to buy beef in Toronto

The idea for West Side Beef came when co-founder Kurt Krumme began to do some research into what's known as Freezer Beef. Basically, when an individual or group of individuals buy a side of beef - half a cow - and butcher it themselves.

The benefit is a product far superior to what you'd find at the grocery store, for a fraction of the price. The downside of course, and the difficulty for Krumme, is that most of us downtown elite types don't have the space to store half a cow, nor the ability to consume such a vast quantity of meat, never mind the knowledge, tools and facility necessary to take apart such a beast.

Luckily for Krumme, his good friend Ryan Donovan just happens to be the resident butcher at Marben on Wellington. Not only does Donovan have the know-how to disassemble a side of beef and portion it out appropriately, but through his background at The Healthy Butcher and years in the restaurant industry he's formed relationships with many local farmers, another thing most of us city folk lack. 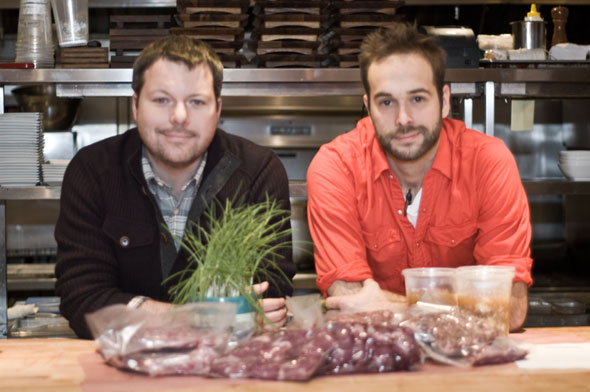 Now, that's great for Krumme and all, but not everyone has a Ryan Donovan up their sleeve, which is where West Side Beef comes in. It's a simple concept really; Donovan and Krumme buy the steer, divvy it up into boxes of approximately 20-25lbs each, and sell each box for $165--$8.00 a pound.

Inside, what you'll find is a complete nose to tail representation of the animal, nothing is tossed away and everything is divided up equally. Fat is rendered down, bones are simmered into stock and the meat is chopped up and vacuum packed.

The meat - sourced from Dingo farms in Bradford, Ont. - is the same premium beef Marben uses on its menu. The cows are raised in pasture, grass fed and hormone free.

"Their product really is just the best, it's the only way to say it," Donovan says. "It's just got incredible flavour, they're really healthy animals. You can tell from the quality of the fat, the quality of the meat that the animals have eaten well consistently throughout their lives, as opposed to just being fed way too much at the end of their life." 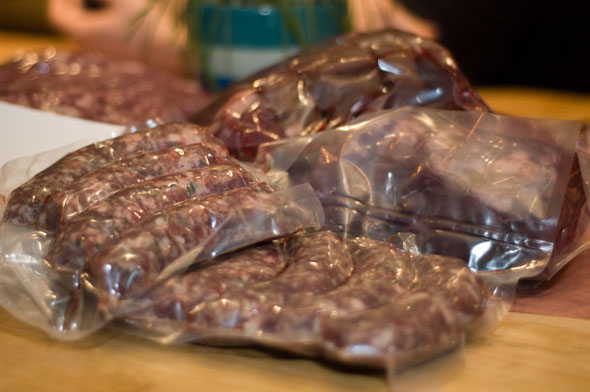 Another neat side effect of buying meat this way is that you begin to look at your food as more than a stack of strip loins. Because you're paying $8.00 or so per pound for all of it, no cut is of greater value than another, and because you don't have a say over what goes in your box, you learn to cook with everything. And while $8.00 may be a steep price for the ground beef comparatively, it's an absolute steal for the tenderloin.

At first Krumme and Donovan were just selling to their friends, but word is spreading fast. They're already getting to a point that if you don't sign up early, there's a good chance you might not get a box. But West Side Beef is prepared for a cautious expansion.

"Right now we try and do one every six or seven weeks," Donovan said. "But as demand grows we'll try and do it more regularly. I think if we were doing it once a week that wouldn't be such a bad thing."

As the business grows though, there are some trade offs.

"When we started I looked forward to pick up day," Krumme said. "It was an opportunity to see all these friends who I wouldn't normally. Meeting strangers is great too I suppose."