A Toronto book club not just for nutmeg lovers

As far as Toronto book club meetups go, the Nutmeg Pantry, a charming little family-run bakeshop in Scarborough, was definitely the place to be on Tuesday night if you like to drown your sorrows in the bottom of a glass of milk filled with cookie dregs. It was the first meeting of The Nutmeg Pantry Cookbook Club and July's book-of-the-month was The Happy Baker: A Dater's Guide to Emotional Baking.

The concept of the club pretty much speaks for itself. A Toronto area book club that centres around the members' mutual love of cooking, baking and trying new recipes or techniques out at home.

Sure, there are lots of cookbook clubs out there on the net. But this one is pulling cooking enthusiasts offline to share their food with one another, face-to-face, in real time. Each month a new book is tackled, and members bring their re-creations to the meeting.

The Happy Baker is a Toronto-based make-up artist named Erin Bolger, who self published the book about a year ago. The recipes in the book have cutesy names like "Goodbye Men, Hello Dolly Squares" or "I'm So Done With You and the Horse You Rode In On Haystack Cookies" and are tied to stories about Erin's own love life. 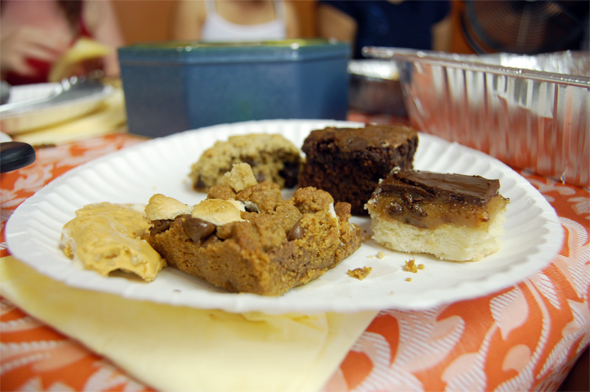 The recipes themselves are all old-school comfort foods (inspired by Erin's youth in rural Ontario) and very beginner friendly - a good way to avoid messing things up when trying to make out ingredients or method through tear filled eyes I suppose.

The group of 10 book club members joined together at the bakeshop (owned by club founder Amanda Nunes' parents) and, as you would expect, talked about the book - what they liked and didn't like, the adjustments or substitutions they made to the recipes, the things they learned when preparing them. But the best thing about this kind of club is, duh, the food. 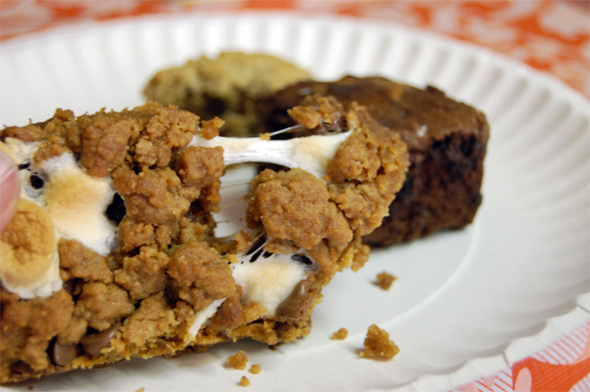 All day, there were 9 different recipes on the table. I, for the sake of being thorough, tried all of them. The fan favourite among members seemed to be the gooey s'mores bars, but among the other baked treats were sugar cookies, chocolate caramel shortbread, toffee biscotti, white chocolate bark, and oatmeal chocolate chip cookies.

The creation of the club was a perfect fudge storm of circumstance for Amanda: her mom owns a bakeshop, she has been hooked on cookbooks since a youth, and she works for Chapters - really how could this not have happened?

"It seems that the whole city is embracing their inner crafty-ness, and baking more, and just being more creative as a whole. I thought it would be a nice idea to start a book club with a twist. Most book clubs are about fiction or non-fiction books, what if we tackled a whole new genre? Plus I think that suburbs like Scarborough get a bad rap, and I wanted to do something unique that originated out of Scarborough, in a creative and fun space."

Lucky to be able to have her finger on the pulse of new cookbooks, Amanda picks up anything that catches her eye and likes to focus on Canadian authors when she can. In the months to come members suggested themes like vegetarian cooking, low-calorie cooking, and Indian cooking.

Even with something as tangible and material as food, there are cookbook clubs out there where nary a taste is exchanged and whole books can be vicariously experienced through the web. So when I ran across a club that manages to pull people off the net and back into the real-time enjoyment of sharing food with people, I was happy. The s'mores bars didn't hurt either. 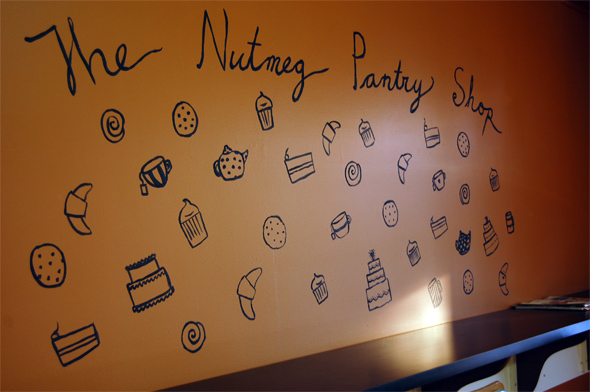