One of Jonathan Wise's earliest memories is running across the bridge by the entrance to the China House near his Forest Hill home and throwing a penny in the water. That bridge is still there, as is the papier mache tree in the dining room and the iconic neon sign, which is good, because Jonathan -- just returned to Toronto with his wife after 25 years working in the luxury hotel business -- is the new owner of the China House.

Every city probably had a version of the China House -- a mid-century modern take on Chinoiserie, with cocktail lounge curves painted lacquer red, murals of dragons and courtesans on the wall, keyhole doors and a sign in bold calligraphy strokes, lined in bright neon. The China House has it all, though according to Wise, most of it needed a good clean after 52 years in business. 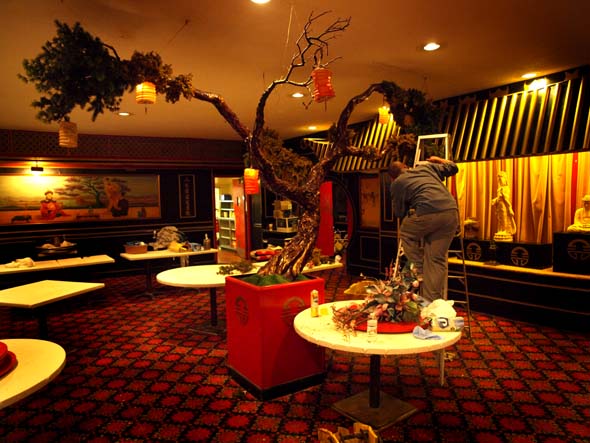 "This is it, baby," Wise says with obvious pride. "I would never be able to afford to redesign or copy this. It's impossible. It's a priceless room - you could not replicate it, and if you did, it wouldn't have the same patina or warmth or authenticity."

Chinese restaurants don't look like this anymore; for higher-end, sit-down eateries, the aesthetic is slicker, in a style that references minimalism and post-modernism. (The recently renovated Garden Gate -- aka "The Goof" -- in the Beaches is a fine example.) The style is pan-Asian, drawing on Japanese designers like Issey Miyake, Wong Kar-Wai films and Haruki Murakami novels, whereas old school places like the China House were products of a different world -- Charlie Chan films, Pearl S. Buck novels and the "green lady" paintings of Vladimir Tretchikoff. 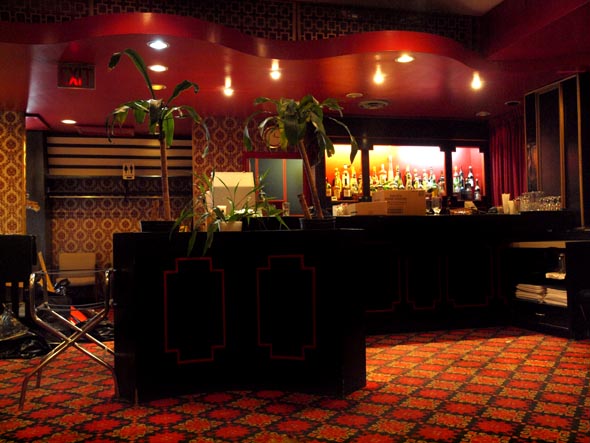 For some reason, the stretch of Eglinton between Bathurst and the Allen Expressway has been kind to Chinese eateries like this, and while Jonathan Wise works to restore the China House, House of Chan just a block east has been doing business for 55 years, moving from traditional Americanized Cantonese food to steakhouse years ago, on a whim of its second of just three owners. 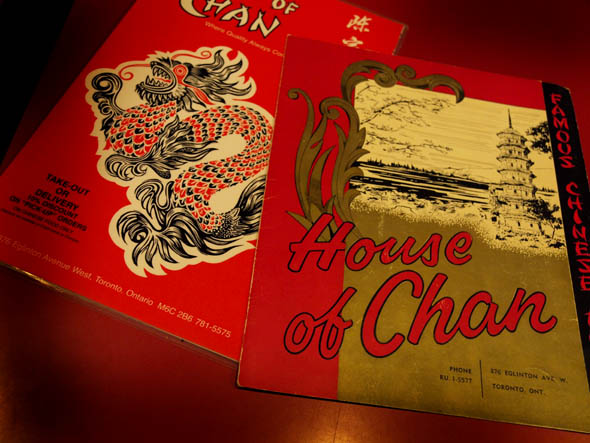 House of Chan manager Peter Pau has been here for 30 years, and produces a menu from its earliest days, when the phone number had two letters and five numbers. Most of the specials, priced at between $2 and $3.50, aren't on the menu anymore -- dishes like Lichee Gai Kew ("baby chicken cubes with lichee fruit.")

Tastes have changed, he says. "Consumers are getting very smart. They know that North American Chinese food is not authentic Chinese food." He can't explain, however, why the two restaurants have survived, even become venerable, on this affluent, mostly Jewish, midtown strip, though he imagines that it goes back generations. "I think they grew up with it down in Kensington Market, with the Chinese nearby on Dundas," he muses, adding that this is just a theory.

Back at the China House, Jonathan Wise says he doesn't intend to radically change the menu, beyond adding more vegetables, bringing back dim sum, putting healthier oils in the deep fryers, and banishing MSG. He knows that the ambiance of a place like the China House is priceless, and wants to provide service that's up to that standard, but judging from the reactions of regulars after being closed for just a few days, he's certain that the place could run for another 50 years. "I think people in Toronto are very supportive of things that are iconic, traditional, have historical relevance, and it's like the Field of Dreams thing - they ache for something historical."