Friday marked the official introduction of a new-to-Ontario variety of apple -- the Red Prince. It's a European variety brought over from a small town called Weert located in the Netherlands, and over the past nine-years Irma and Marius Botden have steadily built up enough acreage to supply the Red Prince to large chains like Loblaws and Sobey's.

On Friday, 10,000 apples were given away to passersby in the PATH at the Exchange Tower and First Canadian Place to promote the official launch. With a motif of spreading civility to all the land, the promoters also threw in hand massages and promised a month long Twitter campaign to promote daily acts of decorum.

While the marketing campaign left a bad taste in my mouth, I was curious about sampling the apples, so I grabbed a few. 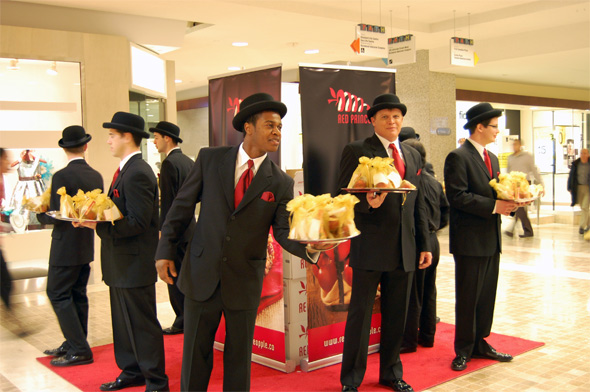 I was met with a flurry of activity as people scrambled to get their own Red Prince, packaged up in a golden drawstring bag and handed out by a crew of dapper subjects and the "Red Prince" himself.

The Botden's immigrated to Canada from the Netherlands in 2000. They brought with them the exclusive rights to grow the Red Prince in Canada. Partnering with Global Fruit, they have orchards located across southern Ontario and grow other varieties like Honey Crisp and Ambrosia.

Going against the popular belief held by organic-minded producers that biodiversity is better, Global's aim is to "improve the Ontario apple industry by producing large quantities of high quality consumption apples in an environmentally friendly manner."

Right now, Ontario sources nearly half of the apples we consume from outside the province. Global wants to change that while encouraging Ontario apple producers to expand and specialize (i.e. mass produce one crop). The aim is noble -- to increase the volume of local product for local consumption -- but what of the methods?

To grow their apples, Global uses a combination of high density growing coupled with eco tunnel sprayers that more efficiently distribute the pesticides. According to Marius Botden, together these result in 75% less pesticide use.

So if you want to be environmentally friendly, why not go organic? The organic question is a tricky one. Certification is difficult (but not impossible) for apple growers in Ontario because the climate and high moisture levels make the apples susceptible to fungus. But, at the same time, apples remain one of the "dirty dozen" of produce most heavily sprayed. Hmmm, I better bust out my fruit & veggie wash before I eat these Princes. 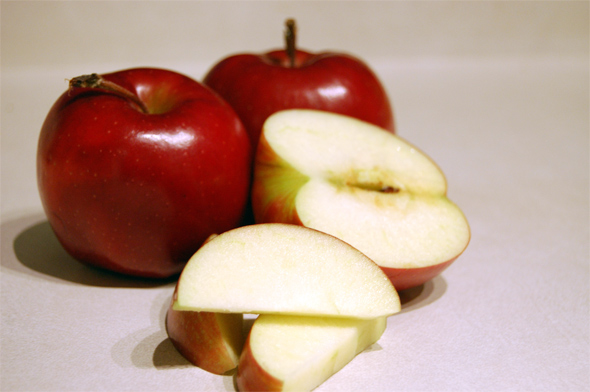 So, after all that, I finally did what I set out to do in the first place -- taste this new variety of apple. And I liked it. The Red Prince is a cross between the Golden Delicious and the Jonathan, so it's both sweet and tangy, with a good crunch. It'll be good for snacking, salads, and pairing with cheese. Whichever side of the local vs. organic debate you're on, if you want to try the Red Princes for yourself, they're now available in Ontario.