The Toronto Gourmet Food & Wine Show is on this weekend at the Metro Toronto Convention Centre. I checked out the official opening last night, and I will say this: if you plan on attending this weekend, you better put your game face on.

Between the good old fashioned grape stomp, celebrity guests on the Food Network stage, 23 tutored tasting sessions, a mixology pavilion, a Portuguese culinary extravaganza and almost 200 exhibitors there is tons to see, taste and do.

The folks at Taste TO have even put together a survivor's guide to help you plan your visit.

The major complaint from past show-goers has been that there isn't enough gourmet food (or food period, in a show that touts "food" in its name) and too much emphasis on the drink component. It was my first time checking out the show and I thought there was a good quantity of food there, but I definitely noticed there was more to drink than to eat.

Although less plentiful than the booze, there were some good eats to be had, namely Anton Kozlik's Gourmet Mustard, A Taste of Quebec, Leslieville Cheese Market, Loic Gourmet, and Rodney's Oyster House on the showroom floor. 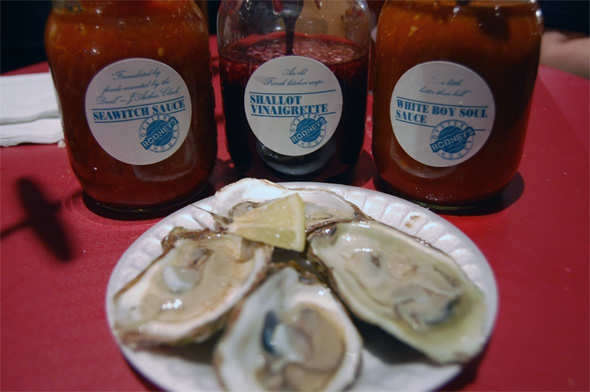 I sampled a bunch of stuff, but my top picks for food were definitely Rodney's own P.E.I oysters with a little hot sauce on one and shallot vinegar on the other -- de-freaking-liscious. And Sassafraz's brownies may very well be the best things I've ever put in my mouth. Notice that I used plural. 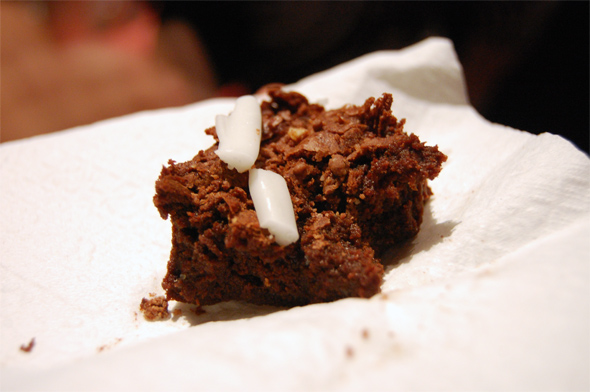 I also tried an amazing extra virgin olive oil from the mountain valley of Crete in Greece. It's made exclusively from the Tsounati variety of olive and had such an interesting and complex flavour with a smoky hint to it -- perfect for bread dipping. 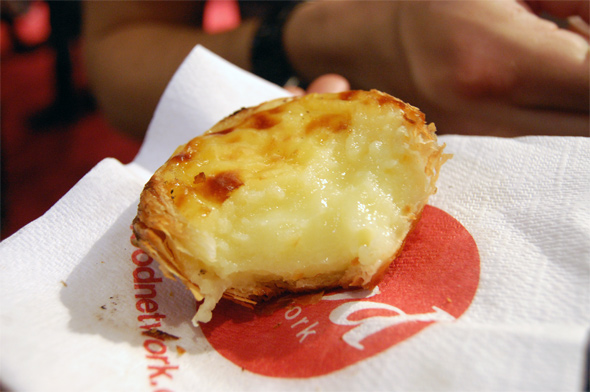 I'm a sucker for Portuguese custard tarts. And the one I had from Cataplana Restaurant was pretty darned good. 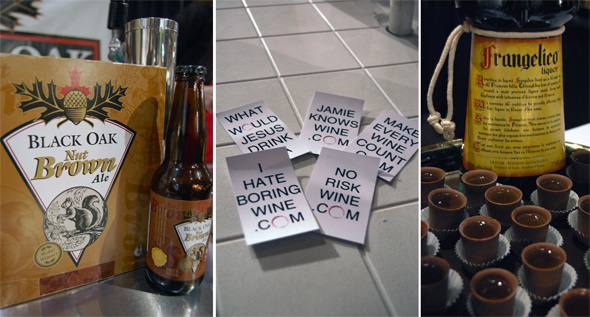 My favs were a lovely Portuguese red I had from Serras de AzeitĂŁo, and a Nut Brown Ale I had from Black Oak Brewery. Then there was the Frangelico shots in a chocolate cup, just cause I was feeling indulgent.

While noshing on my oysters, I happened upon a table covered in random business cards with only weird web addresses on them like "IHateBoringWine.com" and "What Would Jesus Drink.com" -- turns out it is a wine club called Sommelier Service headed up by the well-known celebrity sommelier Jamie Drummond.

For the food lovers, one cool feature this year is "Nine of Dine Awards." Nine Toronto chefs were recognized as being the "hottest in the city" and will be doing cooking demos on the Food Network stage all weekend.

The cost of entry for the rest of the weekend is $15, plus drink and food tickets as you go. It is $20 for 20 tickets and most items cost about 2-3 tickets, and in some cases 5. If you want to go all out and have a really good time you can indulge in some seriously special and rare wines in the Fine Wine Tasting Lounge and have a great meal, but it will get pricey quickly.

My suggestion is to have a light meal before you go and then you can nosh and sip on a few choice samples, pick up a couple things to bring home (gotta love Kozlik's Mustard and Boulangerie Premiere Moisson breads) while soaking in all that is new and exciting in the world of food & drink.

The Gourmet Food and Wine Show runs from Thursday, November 19th to Sunday November 22nd at the Metro Toronto Convention Centre. Tickets are $15 per person Fri - Sun. This event is 19+.