The Edible City of Toronto

The Edible City: Toronto's Food from Farm to Fork is a new tasty morsel added to the the popular Toronto-centric uTOpia series. It's an interesting little compilation dishing out essays "on peaches and poverty, on processing plants and public gardens, on rats and bees and bad restaurant service, on schnitzel and school lunches."

The publisher, Coach House Books, has three essays available for preview on their website and The Torontoist featured various excerpts on their website last week. After reading and enjoying them I decided to check out the This Is Not A Reading Series event/book launch held at the Gladstone on Sunday afternoon.

The essays come to us from an eclectic mix of Toronto food lovers and thinkers with diverse professional backgrounds including writers, urban planners, dietitians, photographers, chefs, activists, and critics. 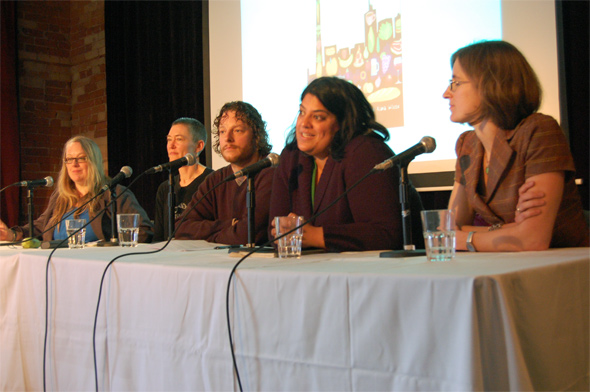 The event included a panel discussion among five of the authors, namely Steven Biggs (edible Toronto), Sasha Chapman (Toronto Life), Sarah B. Hood (Suite101.com), Lorraine Johnson (author of upcoming book City Farmer: Adventures in Feeding Ourselves), and Joshna Maharaj (formerly of The S.T.O.P. Community Food Centre and currently chef at Food Studio in the ROM). It was moderated by Dick Snyder of City Bites magazine.

The discussion touched on various interesting issues like the urgency of getting kids involved in where and how their food is produced, or how to transform the groundswell of awareness we now have around food security and other issues into action.

We also heard interesting and at times mind-boggling stories abut how a proposal to plant a community orchard in an existing and floundering park almost got the axe because it might mean kids get cherry stains on their clothes, or how one bistro start-up was denied a liquor license for months. 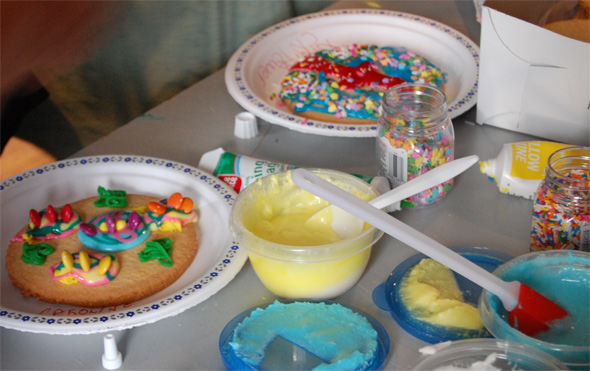 And, as a fun Toronto-themed bonus, there was a cookie-decorating contest that resulted in some pretty creative confections like an homage to Toronto-brewed beer, a community garden accented with cauliflower and peas pinched from the crudite platter, and a depiction of the TTC subway map in icing and sprinkles called "A Sweeter Way." But in the end a young and enthusiastic Torontonian won with a sugary recreation of the CN Tower by night. 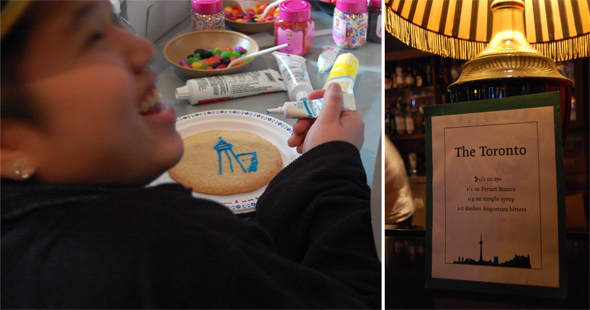 The Gladstone was also mixing up a long-forgotten cocktail classic called The Toronto, the subject of one of The Edible City's essays, an interesting combination of rye whiskey, simple syrup, Fernet Branca and Angostura Bitters.

The impression I have so far, between the excerpts and cramming in a couple more essays on the subway on my way home from the event, is that this is a solid compilation.

It is well-written and thoughtfully compiled to give food lovers (or just the average, interested Torontonian) a unique view of our city's past, present and future food system.

From the history of bread or beer in the city, to a forgotten cocktail named The Toronto for no clear reason, to the politics of street food or why TO got the "Hogtown" nickname - it's a collection as diverse, rich and interesting as Toronto is, and I am going to dig right into the rest of our edible city.

The Edible City: From Farm to Fork is available on the Coach House Books website and in many book stores across the city.