After having a hopping good time this summer at Victory Café's Summer Cask Ale Festival, I jumped on the opportunity to check out Volo's Cask Days, their 5th annual cask ale festival.

Seventy casks from 40 brewers have graced the Yonge Street watering hole over the last week, and the festivities officially wrap up tonight with $5 pint night.

I attended the evening session on Saturday night, but the festival has been going strong since last Monday. Pre-cask days ran from Monday to Wednesday featuring traditional English-style cask ales, hailing from England, Scotland, and Ontario.

On Thursday, pre-cask days wrapped up with a reprise of the final four contestants in the Ontario Cask IPA Challenge, a challenge conceived by owner Ralph Morana and hosted at Volo earlier this year. Mike Duggan's No.9 IPA came out on top of the challenge, followed by Durham Hop Addict IPA, Granite Hopping Mad IPA, and in fourth place Scotch Irish Sgt. Major IPA. 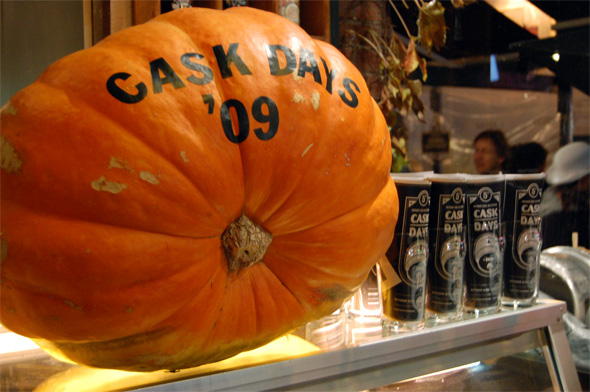 The main Cask Days event kicked off with two sold-out sessions starting at 4pm on Friday and focuses very heavily on Ontario cask ales - 40 of the 49 casks available were from right here in Ontario. The remaining nine were from our Canadian neighbours to the East (QC) and our colonial neighbours across the pond (England). 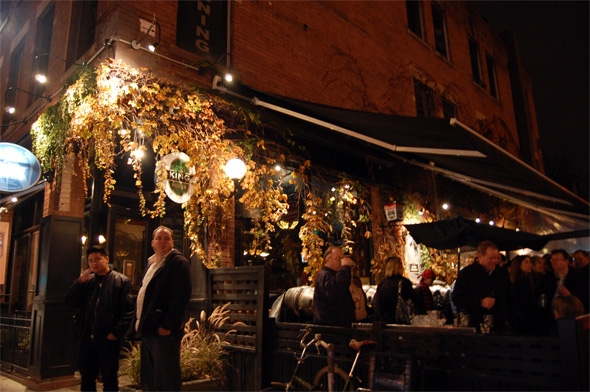 Despite the ghoulish excitement and Halloween activities going on nearby in the Village, Volo was still pretty much at capacity for most of Saturday night. After pouring over the Cask Days website, I had a solid game plan as to what I wanted to taste. And since they were serving ¼ pints for only $2, I had the pleasure of being able to drink lots-o-cask ale.

I started the evening out nice and light with the Riders of the Purple Loosestrife Mead by Church Key. It was everything I expected it to be, sweet with a nice body and distinct honey flavour.

Up second was Niagara's Best Portage Pale Ale. It had a beautiful foral nose that also came through in the flavour, and reminded me a lot of the traditional ales I've had in England.

From here I went on to a Smoked Oatmeal Stout from Trafalgar. I was really pleasantly surprised by this one. It had an intense chocolate nose mixed with a scent that took me a minute to pin down - I finally landed on raisin butter tart. The flavour was a very balanced cocoa with a slight sweetness and nice floral undertone. 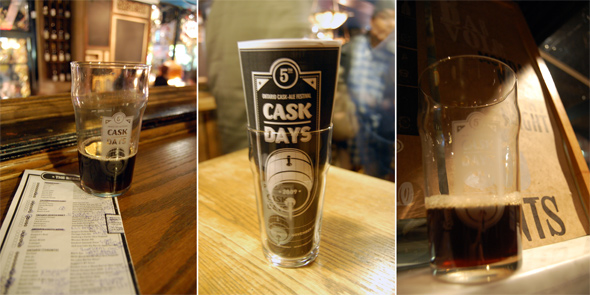 Next up was Black Oak's Lime Light Ale. I chased it down by Amsterdam's Oaked Oktoberfest 2009, which had a slight sweetness and a nice toasted nut finish.

Thornbury Village Peeler Cider provided a little break. It was very light, almost watery. It wasn't too sweet and a little tartness from the apple, but lacked depth to make it really interesting.

I dove right back into the fray with Hockley Valley's Peanut Butter and Jam Ale. On the nose it truly had an intense peanut smell. When I tasted it the peanut flavour totally came through. The "jam" came through in a nondescript sweetness, but overall it was an interesting ale. I went for the Black Creek Spiced Pumpkin Ale next. Pumpkin and spice on the nose, mostly clover in the flavour but sadly no pumpkin.

I only had a couple left in me, so I had to go for Matt's Marathon Mild, a collaboration between Volo's owner Ralph and Great Lakes Brewery. The recipe came from Ralph's former days brewing in England, and the name in memory of one of his customer's who recently passed away while running a marathon. Great story, and as for the beer, it had an intense caramel scent with a distinct coffee bean flavour and a toasted nut finish.

I concluded my night by taking off to Quebec with Dieu Du Ciel's Penombre Black IPA. This was a really interesting one, and perhaps my favourite. It had an intensely fruity sweet scent, somewhere between pineapple and strawberry, balanced by a slight bitter coffee note as well. The flavour was entirely different. It was entirely a bitter coffee experience. A very neat contrast from scent to flavour.

The Bar Volo Cask Days event has a seriously devout crowd of caskheads. With a truly impressive selection of cask ales, good food and a great atmosphere it's hard not to let your inner beer dork out.

For all those interesting in keeping up with cask ale happenings in the city, check out the CASK! website and keep an eye out for Victory Café's Winter Cask Ale Festival happening in January.