The Court of Good Taste at Yonge and Dundas

Dundas Square has never been my favourite place. Maybe it was the years of construction, or maybe it's the crowds. More likely it's the Eaton's Centre, a place I avoid until Christmastime, at which point my cell phone invariably dies, requiring me to wait hours in line at the Rogers store.

Whatever the reason, Yonge/Dundas is an area that sees me on a need-to-go basis only. When young friends from Ireland, or visiting ESL students tell me they're going there, I inwardly smirk. Tourists. I'm similarly smarmy when academic-darling Richard Florida lauds the area. Newbie. As far I've been concerned for a long, long time, locals avoid Dundas Square as much as they can.

Lately, however, I've had cause to change my mind. A few weeks ago my sweetheart and I ate at the Queen and Beaver, walking through the square on our way home. On our stroll we saw groups of young men playing soccer, a troupe of break-dancers and lots of young people hanging around in clusters -- all looking like regulars. Unstressed by the goal-oriented chores that usually bring me there, I enjoyed the speed and vibrancy of the square. I pointed out the Toronto Life building, re-telling one of my favourite rants: this building was under construction so long I had managed to complete two degrees and two jobs before it was done. "Yeah, yeah, I've heard this story before," he said, "let's go inside!"

What we found surprised me. It wasn't the AMC or the Future Shop -- these are the mass-market businesses I've come to expect from shiny new buildings -- but the third-floor food court that impressed me. Alongside standard chain offerings like Harvey's, Teriyaki Experience, Pumpernickel's and Subway were novel places like California Thai, Koryo, Opa Souvlaki, Caribbean Queen, Milo's Pita, Juice Rush, and SautĂŠ Rose, offering a surprisingly indie feel and an ethnically diverse Toronto-centric selection.

Turns out a few of them are chains, albeit small Canadian ones. Most, like Koryo and Opa Souvlaki, have a strong prairie presence, and are just beginning their forays into Toronto's multi-ethnic food scene. Others like SautĂŠ Rose are small, with only 2 locations in Toronto. Many offer food-court fusion versions of the cuisines they claim to represent: like hamburgers at Korean Koryo and food-court Chinese offerings at California Thai. 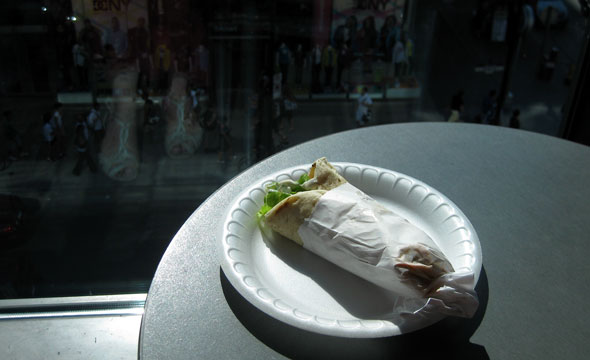 Over the next few weeks I sampled the Tom Yum Soup at California Thai, the Lamb Wrap at Opa Souvlaki, and the Vegetarian Platter at Milo's Souvlaki. 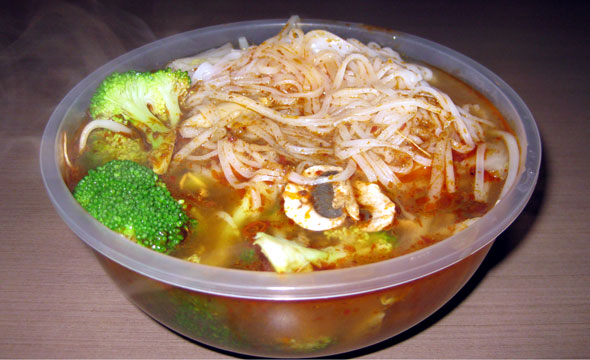 California Thai's Tom Yum Soup and Opa Souvlaki's Lamb Wrap were both respectably tasty: the soup was as salty, sour, sweet and spicy as Tom Yum should be, although inexplicably graced with about a half head of broccoli. Opa's Lamb Wrap provided fresh pita, soft lamb and a piquant sauce. Each dish was fresher and tastier than the general food court standard, but not quite as yummy as I'd expect from a street-level vendor. 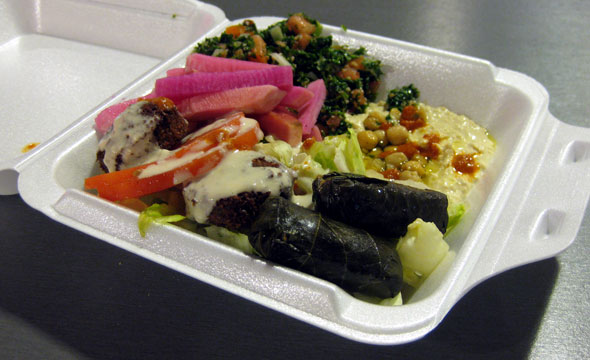 Independently owned Milo's Pita, however, provided a vegetarian platter that could hold its own with any Mediterranean restaurant's. Tender grape rolls, creamy hummus, tongue-tickling lemony tabouli and the best falafels I've had this year were both a treat and a surprise. Unfortunately, the prices at Milo's were pretty high, too: $10 for food-court ambience is a lot, but at least I know where the money's going: rent and fresh ingredients.

Now, I'm not going to go all Richard Florida here, but I will say that the Toronto Life Building's food court has done a lot to redeem my feelings about the Yonge/Dundas area, and food court cuisine in general. It makes me proud of my city to learn that small, relatively healthy and culturally diverse cuisine is a viable alternative to the usual dross, and I look forward to future visits to this court of good taste.